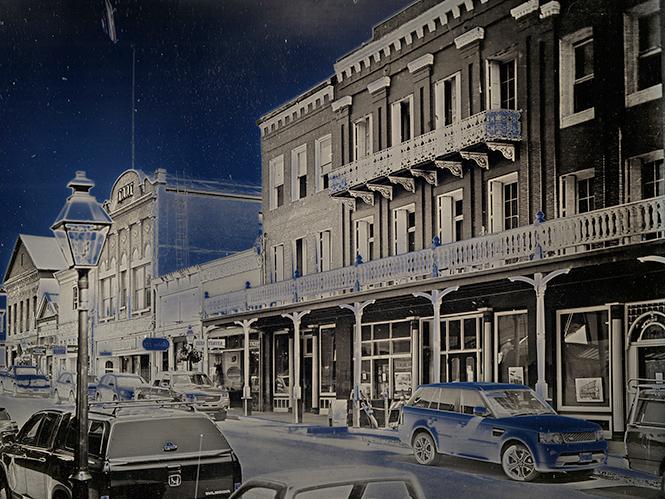 While museums are busy making themselves increasingly relevant to younger and more diverse audiences, galleries continue to have their finger on the pulse. See below for a brief survey of fall exhibitions.

Haines Gallery: "Binh Danh: After the Gold Rush" For his latest body of work, Danh spent six years journeying across the American West and making old-fashioned daguerreotypes on silver plates in his mobile darkroom, techniques that harken back to the pioneers of the medium and give his imagery an "another time, another place" quality. Danh captures architectural details of Victorian buildings and historical sites in Nevada City, contrasting the timelessness of the surrounding landscape with stylish storefronts, cool cars and portraits of local residents. "Tamman Azzam: Forgotten Cities" A prominent artist in his native Syria, Azzam was forced to flee the country when civil war erupted in 2011. He settled in Berlin. Since launching the viral image "Freedom Graffiti," a digital collage that combines Syrian ruins with Gustav Klimt's "The Kiss," he gained attention for his poetic paintings, installations and collages. The mixed media works in his new show, which employ paint and shredded or torn papers, depict the terrible beauty of his ravaged homeland, an unreal nightmare of buildings reduced to rubble and trash, torched vehicles and the uninhabited remains of devastated, once-thriving ancient metropolises. (Sept. 5-Nov. 2) hainesgallery.com

Bedford Gallery: "Off Menu: Contemporary Art About Food" For centuries, food has been an obsession, and that applies to artists, from the still life paintings of the Dutch Masters to Wayne Thiebaud's cakes and pies. Anchored by a dozen fine art prints by Salvador Dali, this show features culinary desires visualized by an international cast of contemporary artmakers. Don't go on an empty stomach. (Oct. 6-Dec. 15) bedfordgallery.org 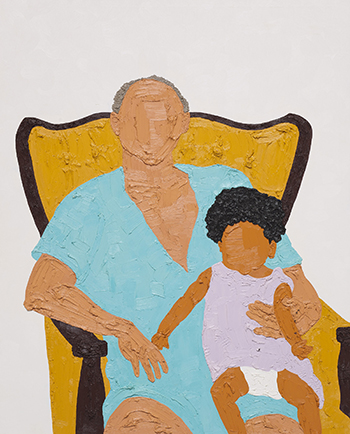 Shaina McCoy, Heir to the Throne (2018). Oil on canvas. Photo: Courtesy of the artist and Ever Gold Projects

Pier 24: "Looking Back: Ten Years of Pier 24 Photography" It's difficult to believe that this unique, magnificent exhibition space on San Francisco Bay is celebrating its 10th anniversary, but indeed it is. This, the first of two consecutive exhibitions marking the milestone, features key elements, photographers and subjects such as portraiture that form the core of the Pilara Foundation's collection. Diane Arbus, Robert Adams, Richard Avedon, Dorothea Lange and Horishi Sugimoto are among the 50 photographers, famous and lesser or unknown, whose work will be on view in the first round. (through April 30) Pier24.org

Fraenkel Gallery: "Carleton Watkins" Ask the average person which photographer they most identify with sweeping Western landscapes, and they'll likely name Ansel Adams, but Carleton Watkins was taking spectacular, large-format, sepia-toned images with a customized mammoth-plate camera a century before Adams ever saw the inside of a darkroom. A dozen rare 15 x 20-inch photographs, taken by the artist who's considered the greatest photographer of the 19th century, are on view here. They include dramatic vistas of a then-virtually-unknown Yosemite Valley, Oregon's Columbia River and a dreamlike mirage of the Mission San Luis Rey. Watkins was the subject of the gallery's first exhibition in 1979. "Another West curated by Richard Misrach" runs concurrently. (Sept. 5-Oct. 19)

Ever Gold Projects: "Shaina McCoy: A Family Affair" In a new group of intimate portrait paintings, McCoy, a Minneapolis-based African American artist, summons her family heritage and legacy of closeness. Based on photographs from her family album and influenced by Impressionism, she creates suggestive afterimages of familiar, well-trodden places and loved ones with featureless faces. Mothers hold their children, a trio of friends in T-shirts and baseball caps link arms, a couple nestles close to each other: what shines through is the affection that binds them. Withholding just enough realism, her blur of emotional memories provides a canvas onto which we can project our own. (Sept. 7-Oct. 26) evergoldprojects.com 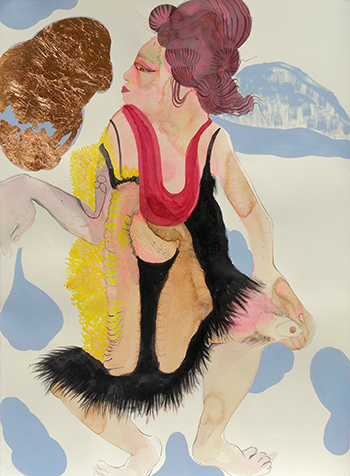 Rina Banerjee, She had guts! She got lost and she fought a lot, hung her inside cords, colon, stomached all that she could. She stood on a beach with one arm a hook and the other held fish, held out her actions, feared no God as nature, her mother was on

Hosfelt Gallery: "Blemish" Whimsy and magic reign in Rina Banerjee's sensuous paintings, which poetically address issues from the perspective of a woman of color. "Freedom is the most expensive commodity, nature the most dangerous beauty," the India-born artist writes. "My work examines both." Alluding to immigration, colonialism, the environment and identity, she fluidly blends vividly colored inks, metallic leaf and collaged materials into exotic settings where untethered female figures or goddesses in states of transformation — oscillating between human, bird and beast — float freely through ambiguous worlds. (Sept. 7-Oct. 12) hosfeltgallery.com

Berggruen Gallery: "Helen Frankenthaler: Paintings" Credited with propelling the transition from abstract expressionism to Color Field painting, and regarded as one of the most innovative and influential 20th-century painters, Frankenthaler was one of the few women artists to surmount the obstacles of her era and triumph in a male-dominated field. The show covers three decades of her career, from 1953-78; it includes 19 expansive, major works that translated the world around her, some rarely exhibited, and examples of the soak-stain technique she invented, which created pools of translucent color. (Sept. 26-Nov. 9) berggruen.com

Dolby Chadwick Gallery: "Useful Lies" is an exhibition of recent works by French artist and former journalist Eric Antoine, who has been described as a man of a thousand stories. Partial to a series format, his obsessive practice involves executing meticulous drawings prior to repeatedly photographing the same personal subjects in and around his home in a forest in northeastern France, and tinkering with light, reflection and precise compositions marked by the occasional imperfection. Known as wet-plate collodion, his slow, complicated, time-consuming, pictorial process, introduced over 150 years ago, distills singular objects that are hybrids of sculpture and silvery cinematic images that catch the light and tease the mind. A mysterious glow like that emanating from a UFO hovers over a disorderly stack of aging book pages; a luminescent orb, perhaps symbolizing optimism, alights on branches fording a woodland creek; cut flowers upside-down in a bottle of water imply ruined youth; and an abandoned hammock is left to fend for itself in a stand of bare, fog shrouded birch trees. (Sept. 5-28) dolbychadwickgallery.com