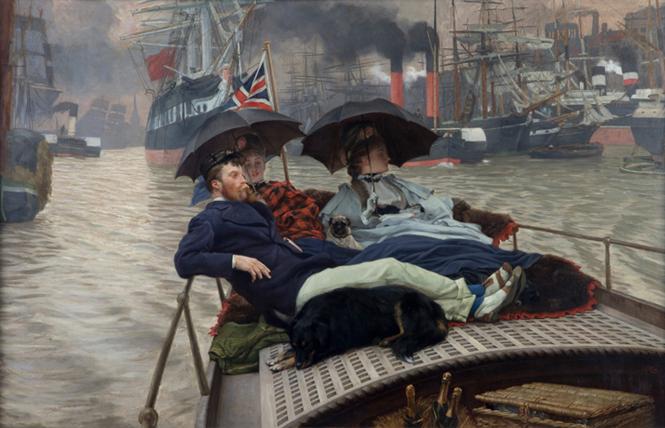 This Fall art season you'll find plenty of edifying opportunities, from a preponderance of eclectic photography shows and a brilliant 19th-century French painter not nearly as well-known as he should be, to a tumultuous slice of the American past. Here's a glimpse of what's down the road.

The Legion of Honor's "Alexandre Singh: A Gothic Tale" was inspired by supernatural elements of the 19th-century European Gothic literary tradition, the fatalism of film noir, and San Francisco's role in the history of that cinematic genre. For the installation, which includes objects from the museum's collection and an accompanying short movie about mistaken identity and doppelgangers, Singh devised a fantastical universe and a mystery thriller involving a dead novelist. (Sept. 7-April 12). For "James Tissot: Fashion & Faith," one of the most anticipated shows of the year, FAMSF and the Musée d'Orsay collaborated on a major reassessment of the life and career trajectory of the artist who captured the inner lives and outer beauty of Parisian women while commenting on resplendent 19th-century fashion, religion and politics. The society paintings of this complex, cosmopolitan artist, who had long relationships with Degas and Manet, are so brimming with life that one can almost hear the tinkling of expensive crystal, the rustling of taffeta and the murmuring of well-heeled party guests. (Oct. 12-Feb. 9). legionofhonor.famsf.org

de Young Museum: "Soul of a Nation: Art in the Age of Black Power" is an historical show focusing on art produced during the volatile decades between 1963 and 1983, when issues of race, identity, bigotry and the fight for civil rights, equality and social justice dominated American culture and public and private debate. Works in a range of media are by artists from cities across the country. (Nov. 9-Mar. 22). deyuong.famsf.org

Asian Art Museum: "Changing and Unchanging Things: Noguchi and Hasegawa in Postwar Japan" is an exhibition of over 100 objects that recounts the story of the remarkable friendship between Japanese American artist Isamu Noguchi, renowned for his paper Akari lamps, furniture designs and iconic wood, stone and metal sculptures, and Japanese painter, calligrapher and philosopher Saburo Hasegawa, who made abstract monochromatic artworks and experimental photo collages while contributing to an array of art movements such as the Beats. Shaped by similar European influences (Noguchi worked in Brancusi's atelier) and their experiences of wartime, both men helped forge a mid-20th-century modern aesthetic. (Sept. 27-Dec. 8). "Lost at Sea: Art Recovered from Shipwrecks" is a voyage into the past and the depths of the ocean that gave up secrets and a trove of Vietnamese artifacts that had lain undetected on the bottom of the sea for over a century. (Nov. 26-March 22). asianart.org 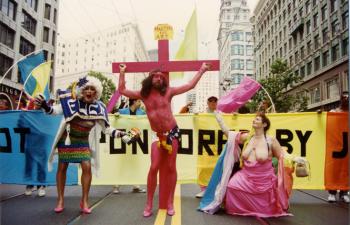 The GLBT Historical Society Museum's "Performance, Protest and Politics: The Art of Gilbert Baker" offers a dimensional portrait of the dynamic life and work of Baker, an activist best-known as the creator of the Rainbow Flag. Among the show's highlights: paintings, videos, excerpts from his posthumous memoir "Rainbow Warrior," and hand-sewn costumes that represent the personas he inhabited, such as Betsy Ross and the Statue of Liberty. Opens Nov. 1. glbthistory.org 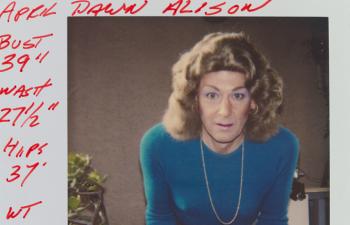 Check out SFMOMA, where a pair of companion photography shows that opened earlier this summer will run through Dec. 1. "April Dawn Alison" features photos made over 30 years, starting in the late 1960s, that reveal the many guises and female personas of an Oakland-based photographer who lived as a man. After her death, she left behind an archive of more than 9,000 Polaroids, most of them self-portraits, that evolved into an obsessive exploration of self informed by pornography, Hollywood and advertising. A repository of good and bad photography and modernist images by the likes of Man Ray and Lisette Model, "Don't! Photography and the Art of Mistakes" is filled with double exposures, lens flares and motion blurs. Technical errors once deemed failures are viewed by another generation as revelations of process or mere stumbles on the road to greatness. If you believe there's no accounting for taste and that the best things in life are accidental, this is the show for you. Since its inception in 1967, the SECA Art Award program has recognized Bay Area contemporary artists and included them in shows like this one. 2019's three winners, Kenyatta A.C. Hinkle, Sahar Khoury and Marlon Mullen, have each been given a dedicated gallery in which to exhibit their creations. (Nov.16-April 12). sfmoma.org

MoAD is mounting a group of photography shows, and here's a rundown. Subscribing to the idea that the continent is as much psychological and physical territory, the group show "Africa State of Mind" revolves around three major themes: Hybrid African cities; Zones of Freedom, which addresses the fluidity of gender and sexual identity as well as the legacy of slavery, colonialism and apartheid; and Inner Landscapes, where the artists draw on personal memories and interpretations of Africa, past and present. "The Sacred Star of Isis and Other Stories" showcases the mixed-media photographic works of American-born Adama Delphine Fawundu, who explores the tension between her family's traditional Mende (Sierra Leone) beliefs and Western values. (Sept. 4-Nov. 15). In "Baye Fall: Roots in Spirituality, Fashion and Resistance," NYC-based documentary photographer Laylah Amatullah Barrayn engaged with the Mourides, a subgroup of Senegal's Sufi Muslims. (Nov. 27- March 1). moadsf.org

BAMPFA: The core works in "The San Quentin Project: Nigel Poor and the Men of San Quentin State Prison" came out of an unusual collaboration between Poor, a visual artist and photographer, and inmates of the infamous institution. For her classes and workshops Poor assembled photographs by established artists as well as images from the prison's historical archive, which her students annotated with comments on daily life behind bars (through Nov. 17). French-Algerian artist Kader Attia has been consumed by healing from the trauma of war. "J'accuse," his seminal 2016 installation, which takes its title, in part, from Abel Gance's 1938 anti-war film, is comprised of 17 enigmatic busts of WWI soldiers whose faces were disfigured and later resurrected by plastic surgery. Carved from teak and mounted on tall pedestals, they're like mini-Easter Island statues, or a convocation of the dead, testifying to the evil men do. (Sept. 18- Nov. 17). bampfa.org