Portrait of an artful appraiser 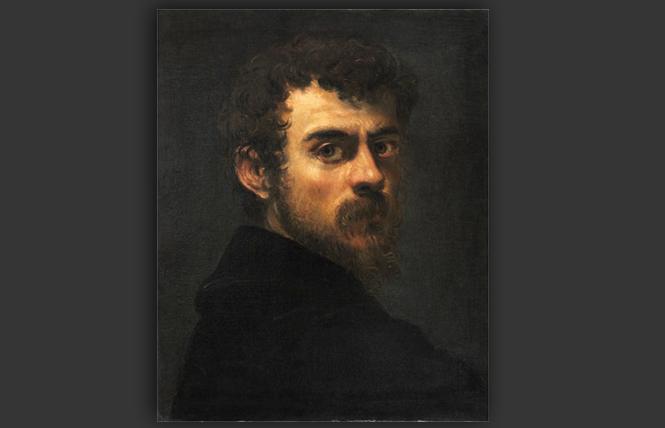 Tintoretto's self-portrait as a young man (1546-48), now at the National Gallery of Art in Washington, DC. Photo: Philadelphia Museum of Art/ARS

On a recent return to Washington, DC, Out There made time for a few cultural forays.

First on our must-see list was "Tintoretto: Artist of Renaissance Venice," 46 paintings and 10 drawings by the Venetian painter Jacobo Tintoretto (1518-94) at the National Gallery of Art through July 7. This is the first large retrospective of the Old Master ever presented in the U.S. Many of the works have never left Venice before. But his working on canvas (then a new method) freed him from the frescoes and other site-specific limitations that came with the work of his two idols, Titian and Michelangelo. His work combines the color and majesty of the former master with the muscularity in the figure study of the latter.

Tintoretto amazes in fantastic religious scenes, mythological narratives and psychologically revealing portraits, including a self-portrait as a young man in which the artist appears to be appraising the viewer (1546-48). A rhyming self-portrait, of the artist as an old man, conveys the wisdom, contemplation and fatigue of maturity (1588).

"Artists Respond: American Art and the Vietnam War, 1965-1975," showing at the Smithsonian American Art Museum, impresses with its artists' furious engagement with the issues of their time. It's a compelling survey of protest art during the immoral US war of the 1960s & 70s, and offers a guide for the present art of resistance. Stand-outs to OT were Philip Guston's caricatures of disgraced President Nixon, Martha Rosler's "House Beautiful: Bringing the War Home" photomontage series, and Peter Saul's "Saigon," wall-to-wall with what The New York Times called "offend-everyone Surrealism."

We enjoyed a recital, "From Warsaw with Love: Polish-American Jazz for Springtime" (Kuba Cichocki, piano; Bogna Kicinska, vocals; Patrick O' Leary, bass), presented in collaboration with the Embassy of the Republic of Poland, celebrating the European Month of Culture, in the NGA's pastoral West Garden Court.

The National Building Museum is one of DC's great hidden treasures, and this visit it yielded up "Secret Cities: The Architecture and Planning of the Manhattan Project" (through July 28) and "Flickering Treasures: Rediscovering Baltimore's Forgotten Movie Theaters," a loving survey of the great art deco movie palaces, many no longer extant, found in that great quirky city (through Feb. 17, 2020).

Filmmaker Rodney Evans will receive the 2019 Frameline Award before the screening of his latest film "Vision Portraits" at the SF LGBTQ film festival on Wed., June 26, at the Castro Theatre. The new film from 2004's Frameline Audience Award winner for the gay classic "Brother to Brother" is a study of four visually impaired artists: photographer John Dugdale, dancer Kayla Hamilton, writer Ryan Knight and the filmmaker himself, currently living with a degenerative eye disease. More info at www.frameline.org.

Back in town, OT attended a progressive wine tasting of offerings from Napa Valley's Schramsberg Vineyards, known for its handcrafted sparkling wines, held at Roka Akor, a fine establishment in Jackson Square we love for more than its palindromic appellation. Vintner Hugh Davies presented a "blending seminar" in which we sampled the four chardonnays and one pinot noir from Sonoma, Napa and Marin vineyards that comprised the 2018 J. Schram base blend, then sipped them in optimum mix.

Schramsberg garnered international reputation when its Blanc de Blancs was chosen to be the wine for Pres. Nixon's 1972 "Toast to Peace" with China's Premier Zhou Enlai. Its wines have been served at State dinners by every U.S. administration since. We sampled natural and finished blends of J. Schram from 2017, 2013, 2009, 2004 and 1999, and it was easy to see why it gets the honors. Though our table was full of accomplished vintners and master sommeliers who tossed around opinions about dosage and late disgorgement, OT held our own in the appreciation department. We love our bubblies.