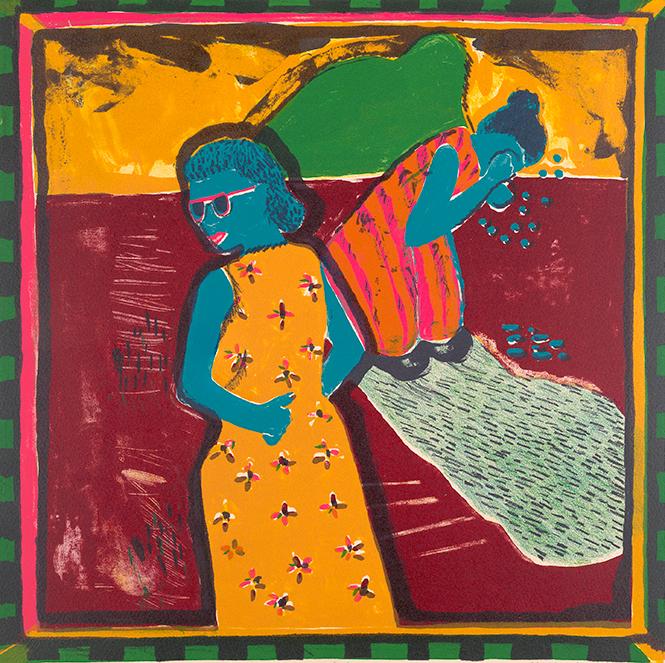 It's no secret that the walls of most major Western museums and galleries are dominated by the creative output of white male artists. The practice has effectively, if not deliberately, edged out deserving works by women and people of color, and kept them from public view. It has not only hurt careers but deprived audiences of access to important and exciting art. In recent years, things have begun to change, and there are notable exceptions, but progress toward leveling the playing field has been painfully slow.

Functioning as something of a corrective, "About Things Loved: Blackness and Belonging," a small but potent academic exhibition at the Berkeley Art Museum, puts outstanding artworks by black artists from Africa and the African Diaspora center stage while shining a light on a history of their marginalization and exclusion from the art world. The brilliance and beauty of some of the 30 or so well-chosen works on view makes one bemoan that sorry history. To cite just one example: the razzle-dazzle of Herve Telemaque's abstract painting "Othello #1" (1960), which merges Haitian iconography with Anglo literary references and French surrealism, hasn't seen the light of day since 1970. Attention should also be paid to Faith Ringgold. Her color lithograph "The Sunflower Quilting Bee at Arles" (1996), a vibrant picture of partying-down with a communal purpose, imagines a congregation of powerhouse black womanhood — Sojourner Truth, Fannie Lou Hamer, Harriet Tubman and Rosa Parks — assembled in front of an approving Vincent Van Gogh in his beloved south of France. Equally radiant is "Crying ain't gonna help none, baby" (1972), a tough-love ode to the blues, replete with a puddle of tears, by Oakland's own Margo Humphrey. 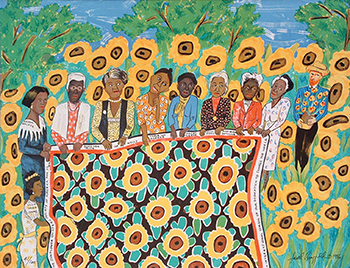 Organized by UC Berkeley graduate students and their professors, the show drew on BAMPFA's permanent collection and the Phoebe A. Hearst Museum of Anthropology, which has an extensive cache of West African objects, some of which were gathering dust in storage and hadn't been on view for years. Coming on the heels of MoAD's "Highlights from the Studio Museum in Harlem" and "Coffee, Rhum, Sugar & Gold," and the phenomenal "Revelations: Art from the African American South" exhibition at the de Young last year, "About Things Loved" adds to a growing awareness of artists who should be better known, and questions why they're not.

Handsomely installed in a spacious black-walled gallery, the exhibition commences with Fred Wilson's "Wanderer" (2003), a discomfiting painted wooden figurine of a uniformed African servant or slave in gold shoes, carrying a tray; a globe tracing African migratory routes is where his head ought to be. Since the early 1990s Wilson has appropriated and modified racially offensive artifacts like this one, a novelty piece still found in Venetian tourist shops and hotel lobbies. He uses them to critique both the relegation of black Africans to subservient roles and the reflexive priorities of museums. His piece leads off "Roots and Routes: Blackness as Belongings," a section that includes a hand-woven Gullah basket from the Sea Islands off the South Carolina coast, and an aged, sepia-toned photograph of enslaved people gathered on the deck of a sailing ship circa 1870.

Romare Bearden's collage "Continuities" (1969), a marvel to analyze close-up, is featured in a section on black bodies and black life. Inspired by African art and channeling jazz, Bearden created an authentic sense of time, place and thriving community with magazine clippings, newsprint, cut paper, paint and a superb eye for color. One can almost hear the racket of the city in a scene where a couple, portrayed in a style modeled on African masks, is dressed for an out-on-the-town neighborhood stroll during the Harlem Renaissance of the 1920s and 30s. A horse with blinders is pulling a cart in the near distance, and a sliver of sun setting in a red paper sky signals the evening is just getting rolling.

Erica Deeman, one of two gay artists here, is represented by "Untitled 08" (2014), in which a silhouette of a black woman's profile is contrasted with a harsh white backdrop. Lyle Ashton Harris addresses his evolving identity as a queer black man, the second generation of AIDS activism, and finding joy in daily life, despite the pandemic. He's the gender-fluid subject of his 1993 color photograph "San Francisco is the Only City Where You Can Spend a Million and Still Feel Like Shit," where he reclines in full face makeup next to a box of half-eaten pizza crusts. Locals will relate to the title's sentiment, though the dollar amount needs to be adjusted for inflation: $10 million would be more like it.

Raymond Saunders made art out of recycled junk and other detritus he collected on Bay Area streets for "About Things Loved" (1986), the painted collage that gives the show its name. Assembled on a damaged folding screen, it's comprised of children's finger paintings and drawings, a scrawled Chinese parking sign, Japanese calligraphy and a grocery list whose contents — an egg here, a lemon there — find their way into the composition. To whom and where do these displaced objects belong, and have they found their way home at last?