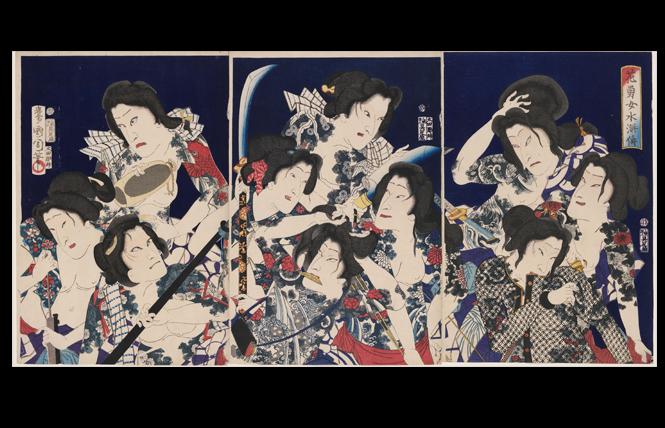 Among the cognoscenti, the 19th-century Japanese tradition of tattooing, which emerged during the late Edo era, is considered the best, prized for its detail, complexity, and subtle shifts in vibrant hues and sophisticated compositions. But the only surviving record of the real-life, deliriously intricate inked designs are woodblock prints produced by artists in the same period. Whether the tattoo fad and its enduring motifs were spawned by the prints or vice versa is still a subject of debate. Academic questions aside, the technical virtuosity on display in "Tattoos in Japanese Prints" at the Asian Art Museum is sure to thrill a legion of aficionados. While die-hards may be the target audience, other visitors, even those not compelled to run out to the nearest tattoo parlor, will appreciate the splendid artistry and style of an arcane craft preserved for posterity by dint of gifted printmakers.

A far cry from their back-alley sisters, the (mostly) large-scale, spectacular pictorial tattoos depicted here are big mothers designed to impress with creative prowess and complicated narratives. If there is an acknowledged father of the specialty it would be master artist Utagawa Kuniyoshi, who's credited with all but inventing the full-body tattoo. His emblematic iconography, speculated to have kicked off a boom that lasted for 40 years, came to adorn the bodies of urban Japanese men. Resembling colorfully patterned garments and layered with hidden meaning, these action-packed scenarios of mythical and historic derring-do — with all manner of dragons and demons, fierce predators and a random plum blossom or two — covered the flesh from the neck to the knees, except for a discreet bare strip down the middle of the chest that allowed them to be easily concealed by clothing. 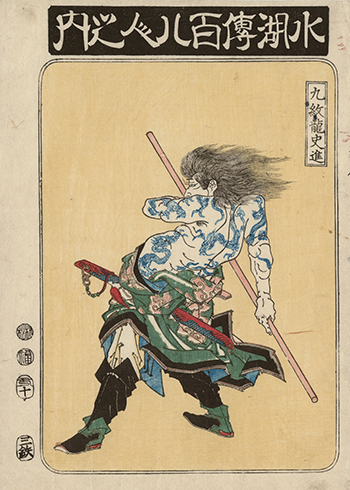 Shi Jin, the Nine Dragoned, from the series One Hundred and Eight Heroes of the Water Margin (1853), by Totoya Hokkei. Woodblock print; ink and colors on paper. Photo: Museum of Fine Arts, Boston

Along with colorful pages from erotic books and manuscripts with examples of forcibly applied punishment tattoos, the show includes primo selections from Kuniyoshi's best-selling series inspired by the immensely popular 14th-century martial arts novel "Water Margin." The epic fantasy-adventure tale was first translated from the Chinese and published in Japan between 1757-90. Kuniyoshi's illustrations, which he called "One Hundred and Eight Heroes of the Popular Water Margin," departed from the source material, where only four of the legendary hero bandits were described as having tattoos; indulging in a bit of artistic license, he invented designs chronicling the exploits of 15. The prints were a mega-hit when they came out in the late 1820s, their mass appeal rivaling "The Avengers" phenomenon of today. In "Zhang Shun, the White Streak in the Waves," regarded as the finest of the series, a man's naked body is embellished with a monstrous snake slithering through ivy. Brandishing a fearsome sword, he dives underwater with gusto to breach the watery gate of a fortress.

Meanwhile, another Olympic swimmer, "Li Jun, the Dragon in the Turbulent River," overturns a boat with brute force and tosses its passengers into the drink, aided no doubt by the Thunder God and lightning bolts that dance across his torso and shoulders. In the kinetic "Ruan Xiaowu Fighting Underwater," a former fisherman, perhaps Japan's answer to Aquaman, plunges into the watery deep to vanquish an enemy general; yet another scene shows a hero tattooed with a leopard, holding back a waterfall with his bare hands.

The exhibition also injects fun facts into the mix. We're told, for instance, that the government of the early Meiji period (1868-1912), believing that tattoos were uncivilized and didn't comport with the modern image they wished to project, prohibited the practice. Although the edict didn't bar sailors on leave, foreign tourists or posh aristocrats like George V of England and Russia's Nicholas II from acquiring tattoos, it did drive a once-thriving if marginal industry underground, and put the damper on prints of tattooed figures. (The ban was lifted after WWII.) A defiance of social convention coupled with a painful design process involving multiple sessions where a bundle of needles at the end of a stick were hammered into the skin (the body-sensitive need not apply) gave tattoos outlaw status and made them a badge of bad-boy courage for gangsters and organized crime syndicates like Japan's Yakuza.

Though a frequent subject for printmakers, Kabuki Theater actors never had real tattoos; the imagery was temporarily painted on their skin and removed so they could portray a range of characters. A restriction forbidding women to perform onstage gave rise to crossdressing and female impersonation. In "A Water Margin of Beautiful and Brave Women," a playful, gender-bending triptych impressively rendered by Kuniyoshi protégé Toyohara Kunichika, a gaggle of famous actors of the day, elaborately dolled up in red and blue, pretend to be tattooed amazons readying for battle, one clutching the top of her head as if fretting over the imminent conflict.

Utagawa Kunisada imagines a scene featuring an actor in the role of Benten Kozo Kikunosuke, a handsome thief who disguised himself as a woman to better pull off his crimes. He appears here barefoot and sitting on a tansu chest, coquettishly proffering a cup of tea. In a moment of fatal distraction, his patterned robe slips off a tattooed shoulder, revealing his actual gender. Uh-oh.