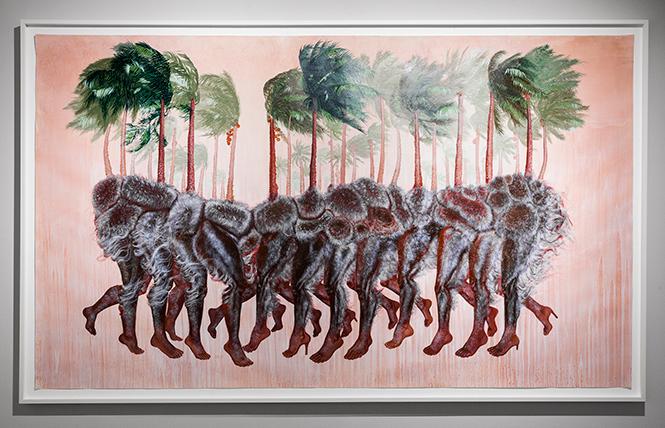 Firelei Báez, "How to slip out of your body quietly" (2018), acrylic and oil on paper. Photo: Collection of Alyssa & Gregory Shannon, Houston, TX

The legacy of European colonialism, its damage to indigenous populations in the Caribbean, and its lingering wounds and influence inform "Coffee, Rhum, Sugar & Gold: A Postcolonial Paradox," a new exhibition with an intriguingly original premise. Now at the Museum of the African Diaspora, it features the work of 10 contemporary artists connected or native to the region, hailing from the Bahamas, Jamaica, the Dominican Republic, Haiti and Puerto Rico. To varying degrees and in overt or subtle ways they aim the sharp end of the spear at a pernicious power structure and the relationship between those who benefited from an oppressive and grossly unfair system, and those who sought liberation from exploitation and slavery whose corrosive effects can still be felt today. Although the show's title alludes to the desirable commodities exported from the area, its real subject is deeper: the pervasive abuse of power. Outrage at violation and fundamental injustice powers many of the exhibition's artworks, which are as eclectic as their makers. Among this critic's laments is that there aren't more of them, or additional historical context pertaining to individual pieces, which would've enriched the experience for visitors.

Andrea Chung's evocative two-part installation "Proverbs 12:22" (2019) speaks softly and carries a big stick. Chung cooked sugar until it achieved a hard, glassy texture and a shiny glaze — think of crème brulee or fossils preserved in amber. She then applied the concoction, along with tiny beads, rice, herbs and spices, to the covers of paper books in assorted sizes, mini gavels, and a stained page of sheet music. The colors range from ruby red and shades of brown to black, the latter achieved by cooking the sugar until it burnt. The project explores the uses and misuses of the Bible, especially during the dark days of slavery, where it could be a tool of oppression or hope, depending on who was proffering it. Slave masters notoriously handed out edited copies of the good book, the only version slaves were allowed to possess, that expurgated sections condemning the pernicious slave trade. 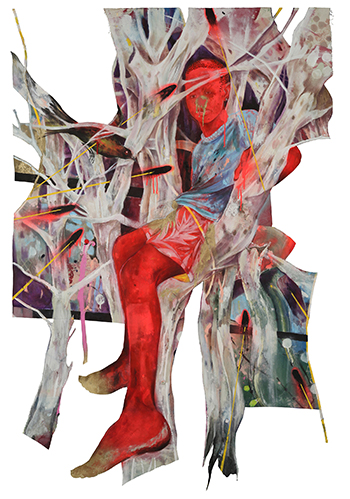 One thinks of the Bahamas as a playground for the rich, but Nassau-born artist Lavar Munroe spent his formative years in a rough, impoverished neighborhood, far from the eyes of tourists and affluent residents. Ergo, his tense, visceral, multimedia works, which mine the African Diaspora and disparities between the privileged and the marginalized. Several prime examples are sculptures from the artist's "Gun Dogs" series. Five energetic members of the pack, on hand at the show, bare their teeth and assume menacing postures; one has a studded, black leather choke collar, while another lunges forward with its jaws agape. The beasts are made out of found materials such as cardboard, deconstructed Junkanoo (Bahamian carnival) costumes, rubber gloves, discarded shoes, toys and colorful miniature tennis balls that serve as eyes; a gold-studded red tongue that hangs out of the mouth of one tough customer looks to be an insole salvaged from a pair of sneakers. Wrapped as if bandaged, these freakish creatures are like devil dogs raised from the dead, but their horrific aspects are drawn from all-too-real, traumatic associations with slave hunters and the snarling attack dogs that police let loose on civil rights demonstrators. "The black mind and body have endured extreme trauma in relation to these animals," notes Munroe.

Several pieces, like Phillip Thomas' large-scale triptych "Pimper's Paradise, the Terra Nova nights Edition," ask: Whose paradise is this, anyway? The canvas, bookended on either side by mirror images of nattily dressed men, illustrates how fashion functions as a tool of racial discrimination, class distinction, status and upward mobility for the select few. Mingling with a flowery 19th-century wallpaper background depicting period light fixtures reminiscent of sugar plantation gentry, smoke-filled club rooms and white-men-only preserves, are silhouettes of golfers and others engaged in leisure pastimes. The longer you look, the more details you detect.

"How to slip out of your body quietly," a surreal, "island of the mind" painting from Dominican artist Firelei Baez, also questions notions of paradise and luxuries enjoyed by the wealthy that come at the expense of an invisible, low-paid workforce of color. Here she presents a tropical vision of palm trees swaying in the trade winds (so far, so good), but beneath them are the furry hips of ostriches and the bare legs and feet of what appears to be a black-and-brown chorus line a long way from the Copacabana.

For "Veranda (Sca02)," Angel Otero appropriated twisted wrought-iron gates from his native Puerto Rico that he forged into a pair of irregular cylindrical forms, plugging their latticework with chunks of glazed porcelain. Poetically addressing the faded grandeur of architecture descended from an archaic ruling class, his work imparts that, even in the face of cruelty, suffering and degradation, beauty finds a way.