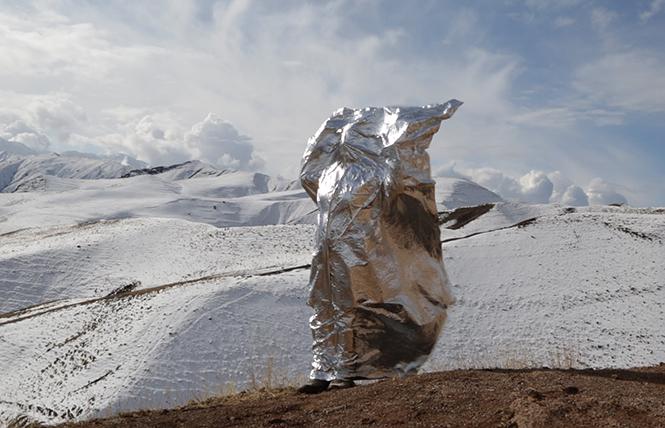 The year is off to a thought-provoking start at local galleries and nonprofit spaces, with artists zeroing in on topical issues from the environment to immigration.

San Francisco Arts Commission Main Gallery: "Part and Parcel" This spring marks 40 years since the Iranian revolution, whose aftermath displaced over 3 million Iranians who migrated to the West. The largest populations put down roots in the U.S, with half settling in California. It would seem there could hardly be a more auspicious moment to invite four contemporary artists of the Iranian Diaspora to participate in an exhibition that explores the meaning of belonging and the desire to achieve it.

Interdisciplinary artist and writer Gelare Khoshgozaran, who was born and raised in Tehran and is based in L.A., contributes "Diplomatic Relations," which consists of a slide projection, its contents culled from her family's photography archive, and a bookshelf stacked with packages lit from within. The installation, she has said, was made in collaboration with her parents who shipped her home library in Iran to her California studio. She characterizes her relationship with her parents as "an intimacy under constant surveillance, state violence and the severance of diplomatic ties. The impossibility of closeness — regulated by X-ray machines, customs, and sanctions — negotiated in the silence of queer life unspoken of." In a metaphoric two-channel video, Minoosh Zomorodinia depicts herself standing alone, almost entirely wrapped in silver foil like a Greek statue awaiting unveiling, braving headwinds in sweeping landscapes, one a cliff overlooking San Francisco Bay, another at the edge of icy mountain slopes. Sahar Khoury's personal sculptures include games of chance and strategy, and reflect on the nature of time, while Tannaz Farsi looks at historic Iranian cultural objects, comparing how they've been interpreted, then and now. Two large photographs, "Strata of Empire (Vestige)" and "Strata of Empire (Relic)," ruminate on the vagaries of empires through a limestone fragment discovered at the ruins of Persepolis, where sculptural carvings and reliefs don't portray women or acknowledge their existence. In what might be a construed as a corrective, a wall work by Farsi pays tribute to notable Iranian women — writers, translators, martyrs and poets — their names spelled out in a font reminiscent of ancient Arabic calligraphy. (SFartscommission.org; through March 30.)

Taraneh Hemami, who curated the SFAC show, has also collaborated with Kevin Chen on "Once at Present: Contemporary Art of Bay Area Iranian Diaspora," a group exhibition that will be installed in several spaces at Minnesota Street Project, March 30-April 20. 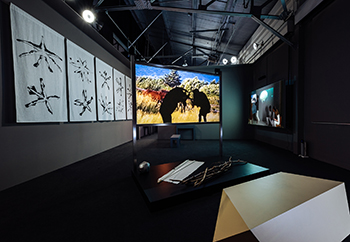 Joan Jonas, They Come to Us without a Word, installation at Fort Mason Center for Arts & Culture (detail). Photo: Pei Ketron

Fort Mason Center for Arts & Culture: "Joan Jonas: They Come to Us Without a Word," originally commissioned for the U.S. Pavilion at the 2015 Venice Biennale, is a multimedia installation that springs from the fertile mind of Jonas, who was combining performance, sound, sculpture, video art, drawing and assorted objects before it was hip or in vogue. For the last 50 years, the artist has harnessed multiple forms and the power of art as a storytelling medium for a variety of projects including this one, an expedition into the frailty of the natural world and the human damage inflicted on the planet. The current show, inspired by summers Jonas spent in Nova Scotia, and Halldor Laxness' fantasy novel "Under the Glacier," is laid out in a succession of enveloping environments, each revolving around a primary image — bees, fish, mirror, wind — and linked by audio of ghost stories passed down through the generations. (Fortmason.org; through March 10.)

SF Camerawork: "In Transit" With immigration in the news and weighing on the mind, this timely exhibition examines transience, transitions between cultures, and the no man's land between the familiar and the foreign. The show's photography and videoworks, created by artists from Germany, Jordan, Lebanon and Iran, testify to the humanity of displaced individuals in Europe and the Middle East, some of whom are fleeing danger and persecution in the their native countries, all trying to find safety and a new place to call home. (Sfcamerawork.org; through March 15.)

Rena Bransten Gallery: "Diane Andrews Hall: in time" With impressive technical virtuosity, Hall's stunning paintings capture the splendor and purity of nature, from gentle Pacific waves making their relentless pilgrimage to the shore, the endless sky and horizon in the distance punctuated by enormous passing clouds, to birds spreading their wings and taking flight or landing for a split-second in her garden, proving that one need look no farther than one's own backyard to find beauty. (Renabranstengallery.com; through Feb. 23.)

McEvoy Foundation for the Arts: "Introspections," a 30-minute loop of short videos lampooning commercial media, television, and inescapable digital platforms that are a fact of modern life, was compiled by video-performance artist Mads Lynnerup, who selected works of parody and self-portraiture in which the creators serve as both director and performer. Artist Nao Bustamante, for instance, pretends to be an exhibitionist to gain access to a taping of the Joan Rivers Show in 1992, surprising its notoriously caustic, mouthy host in "Rosa Does Joan," while William Wegman's "Deodorant" satirizes personal hygiene ads of the 1970s, which mercilessly exploited the craving for social acceptance. (Mcevoyarts.org; Feb. 8-May 4.)

Chesley Bonestell's awe-inducing visionary paintings of the solar system and galaxies far, far away, and his highly original sci-fi fantasy imagery, are credited with inspiring the founding of the American space program and influencing the likes of Ray Bradbury, Douglas Trumbull ("2001: A Space Odyssey") and "Star Wars" effects wizards Ben Burtt and Richard Edlund. The San Francisco native helped rebuild the city after the 1906 earthquake, and when he transplanted his talents to Hollywood, his matte paintings appeared in little films such as "Citizen Kane," "The Fountainhead, "Destination Moon" and "The War of the Worlds." Though Bonestell's work may not be enshrined on the walls of a gallery this month, it, along with a recounting of his remarkable accomplishments, are on display in "Chesley Bonestell: A Brush with the Future," a new documentary opening Feb. 22 at the Roxie Theater.