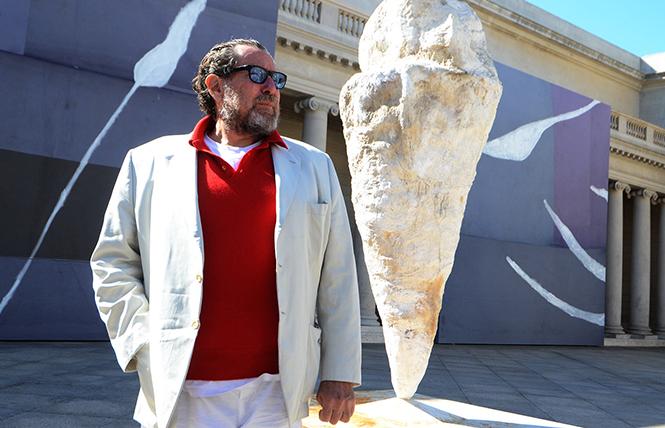 Julian Schnabel stands amidst his paintings and sculptures at the Palace of the Legion of Honor, site of "Symbols of Actual Life." Photo: Rick Gerharter

They say the unexamined life is one not worth living, but we won't allow the same to be said of this past year in art. Herewith, some thoughts on 2018.

So long, Max. The landing of Max Hollein to lead the Fine Arts Museums was a coup, and his departure a blow, the latter not unexpected, according to some wags. The man radiates competence, with charm and star quality to match; it was obvious he was going places, but maybe not so soon. He left his post after just two years to assume the top job at the Metropolitan Museum (who could blame him?) taking his elegance and charisma with him. During his brief tenure he made good on his commitment to highlight in-house curators and take a break from hosting blockbusters from European institutions undergoing renovation. He also helped keep a lid on Dede Wilsey, sparing everyone the embarrassment and gossip that landed on the front pages of the NYT arts section before he arrived. Hollein has been replaced by Thomas P, Campbell, former Director of the Met, in what appears to be some kind of CEO swap. Was this the plan all along? Hollein's shoes will be hard to fill, even though those shoes didn't stay long, and were made for walking, as the song goes.

The award for the largest ego in history to land in San Francisco, so big it couldn't fit into the Legion of Honor's courtyard, goes to Julian Schnabel, an emperor with no clothes who came bearing artworks as empty as they were gigantic. One has to acknowledge that he's a maker of rapturously beautiful movies. His latest, "At Eternity's Gate," a delirious evocation of the trials, tribulations and art of Vincent Van Gogh, stars Willem Dafoe in one of the year's best performances, In either an act of grandiosity or a concession to pragmatism, Schnabel painted the Van Gogh copies in the film himself, and who better, right?

Taking the cake for the biggest mistake of 2018, YBCA killed its adventurous film program. In a criminal move, they cut loose their brilliant, widely respected film curator, Joel Shepard. Thumbs down on this one.

Dudsville: "Art & China after 1989: Theater of the World." The less said the better.

Most Elusive Quarry: Andy Warhol. "Contact Warhol: Photography Without End," a show at the Cantor Arts Center, was incomplete like its central figure, an irrepressible poseur who was hard to find.

Most luscious Eames chairs assembled in one place: "The World of Charles and Ray Eames" at OMCA.

Singular, with a terrible beauty and ferocious Technicolor imagery, the Asian Art Museum's "A Guided Tour of Hell," led by a Buddhist, no less, was as intense as it was compact, painting an alarming portrait of the state of play in the gardens of good and evil.

"Painting is My Everything," an endearing show, also at the Asian, in which the women of Mithila really rocked.

SFMOMA's faboo "Rene Magritte: The Fifth Season" and CJM's mischievous "The Art of Rube Goldberg" dove into the psyches and sensibilities of their respective subjects while escorting visitors down a yellow brick road, albeit in very different directions.

This year's "hats off" goes to Melissa Buron, curator of the Legion's surprising "Truth and Beauty: the Pre-Raphaelites and the Old Masters." Buron wove a compelling, accessible narrative around a fraternity of young, self-appointed British rebels most people didn't know and thought they didn't care about until they saw her remarkable show.

Best photography showcase prize: SFMOMA, which has been giving its Pritzker Center the workout it and we deserve. Their current shows, the captivating "Brassai" and a one-gallery affair on German anti-photographer Johannes Brus, are but the latest in a string of winners.

"Frankenstein's Birthday Party," a deliciously nutty, imaginative tribute to Mary Shelley, mad science, the wages of hubris, and the monster who still stalks our dreams. (Hosfelt)

Most unforgettable sights of the year:

Paolo Pellgrin's hard-to-look-at image of the hand of a police officer pushing the face of an intoxicated, deaf-and-mute black man into the gutter, from his series "Heat of the Night." (Pier 24)

Josh, the shockingly realistic facsimile of the former roommate of trickster/illusionist artist Tony Matelli. Dressed in a T-shirt and shorts, he was laid out, levitating two feet off the ground, as if seized by a trance on his way to the fridge to grab a beer. (David Ireland House)

Your own sweet self, stepping inside Magritte's paintings, courtesy of virtual technology at SFMOMA's sublime exhibition.