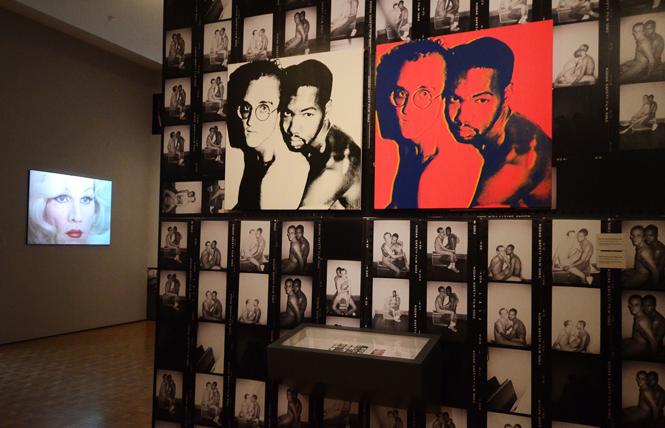 Keith Haring and Juan Dubose, as captured by Andy Warhol (pictured in drag in the background, left), included in "Contact Warhol: Photography Without End" at the Cantor Arts Center. Photo: Rick Gerharter

"Contact Warhol: Photography Without End," a new exhibition at the Cantor Arts Center showcasing the museum's 2014 acquisition of the world's largest archive of photographic images from the Warhol Foundation, includes selections from a cache of 3,600 contact sheets and related negatives that reflect the entire range of Warhol's photography and attest to his astute eye.

Though not the primary medium for which this prolific Pop artist is known, he of the Campbell soup cans and redundant Liz Taylors and Marilyns immortalized in acrylic silkscreens, photography allowed Warhol to generate multiple works in different media from a single image. He purchased his first camera in 1976, and during the last decade of his life, until his untimely death in 1987, he carried a pocket-size Minolta wherever he went, shooting street life and friends, paramours, socialites, celebrities and business contacts, all of whom were fair game. One can easily imagine his both unnerving and flattering members of his famous, publicity-seeking crowd with an unexpected snap of the shutter. He once confessed, "The artificial fascinates me," and it's not hard to believe.

Befitting its subject, the installation in a darkened gallery is stagey and theatrical. A party animal who loved going out on the town every night, he was perpetually on, performing and trying on personas, a mutable mask in search of a self. "I always thought I'd like my tombstone to be blank," reads one of the quotes sprinkled throughout the show. "Actually, I'd like it to say 'Figment,'" a goal the elusive Warhol may have achieved. A telling 1981 color video from Warhol's Factory finds the impresario applying makeup in a blond wig, along with several Polaroid self-portraits in drag documenting the transformation.

The show's intriguing contents, primarily contact sheets from celebrity photo shoots and hired-gun studio portrait gigs, represent the intersection of Warhol's professional and personal orbits. There are plenty of candid shots of the likes of Bianca Jagger and designer du jour Halston in the backseat of a limo; the wedding of Arnold Schwarzenegger and Maria Shriver, with a random Kennedy or two straying into the frame; Pee-wee Herman in spats; Keith Haring hand-painting Grace Jones' body in 1984; Carly Simon in a black teddy; Warhol in Raybans and a fright wig in a self-portrait taken shortly before death; and yes, that's really him posing with Nancy Reagan. You'd need a magnifier to view many of the images properly, so the large touchscreen at the center of the room, allowing visitors to enlarge and rotate the minuscule images, is a definite plus.

"Gay Gay Gay," as in the Warhol line, "Now it's gay gay gay as far as the eye can see," is the none-too-subtle title of a section concentrating on his obsession with 1970s and 80s queer culture. It has a generous share of buff male models splayed on rumpled bed sheets, and various odes to sculpted, Apollo-like pulchritude. One naked specimen stands on his head, his shapely buttocks and well-toned thighs the focus of the silkscreen "Torso from Behind" (1977). Also on view are pictures of Warhol's last partner, Jon Gould, an executive at Paramount who died in 1986 from complications from AIDS. Though Warhol asserted he was asexual, Gould's documented presence in his life is among the many reasons to doubt his veracity. 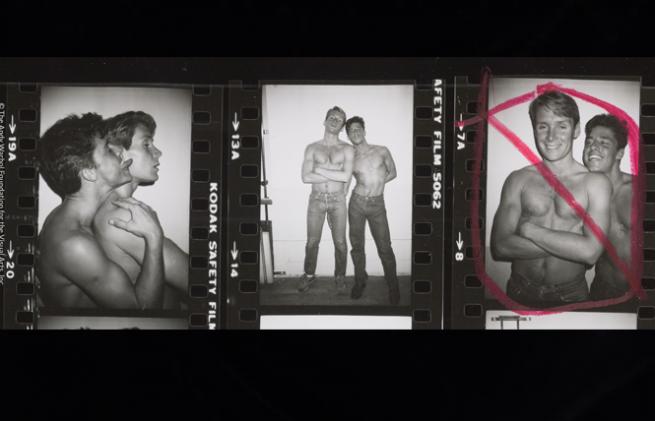 Effectively illustrating the artist's voyage from single tiny image to full-blown artworks, designated areas of the exhibition are structured with a set of common elements. Glass cases containing contact sheets, artifice-free Polaroids of a subject or subjects, and a suite of black & white snapshots sit above walls papered with cinematic blow-ups of contact sheet images. Lording over it all are the monumental acrylic silkscreen portraits that blossomed from his investigations. The exhibition gives several stars in Warhol's firmament the shrine treatment. Of Liza Minnelli, he once remarked, "When Liza walks into a room, everything stops and people wait for the act to begin." She's seen in a video and a photo shoot-in-progress, as well as in the aforementioned silkscreens. Grace Jones, an Amazon among divas, receives a similar altar of devotion with pictures of a costume-fitting and clips from an article on Her Majesty that appeared in Interview magazine. The Wicked Witch of the West from "The Wizard of Oz," Margaret Hamilton, smiling sweetly in a pointy black hat in Warhol's photos, looks a whole lot less terrifying than the green-faced gorgon cackling up a storm in a 1981 silkscreen. Keith Haring snuggles, circa 1983, with his longtime boyfriend, Juan Dubose, in a series of multiple enlarged contact-sheet images plastered across a stand-alone wall; two silkscreen versions of the intimate couple, one splashed in nightclub backroom red, are superimposed on the surface. The unlikely pairing of Haring and Dolly Parton, seen in a quartet of shots (1985-86) that are either under- or over-exposed, is interesting, but apparently it was assumed they don't merit explanation. The same appears to have applied to graffiti artist Jean-Michel Basquiat, whom Warhol captured in 1982 working in his studio and in a soulful bronzed silkscreen splattered with green paint and urine. Excerpts from a series on China also could have used some elucidation — what was Warhol doing there? — as have the curious clinical shots of a nude Pat Hearn. 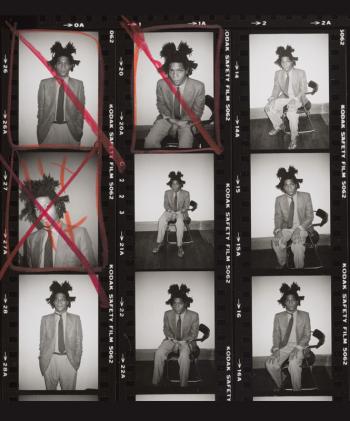 These are examples of a larger problem with a show that will leave you out in the cold if you aren't already knowledgeable about Warhol's importance in the art world and his contributions to popular culture, or familiar with the glamorous social milieu and fast crowd he ran with. How to explain the omission of background information and absence of context at an institution that packs even the smallest single-room exhibition with meticulously researched, fulsome text? Visitors can fill in the blanks themselves — if they can't, they're out of luck — but the exhibition would have been so much better and more alive if that weren't necessary. It's as if the curators stopped midway through the installation and left it incomplete, an unfinished project, much like the man himself.