Identity & the language of attire 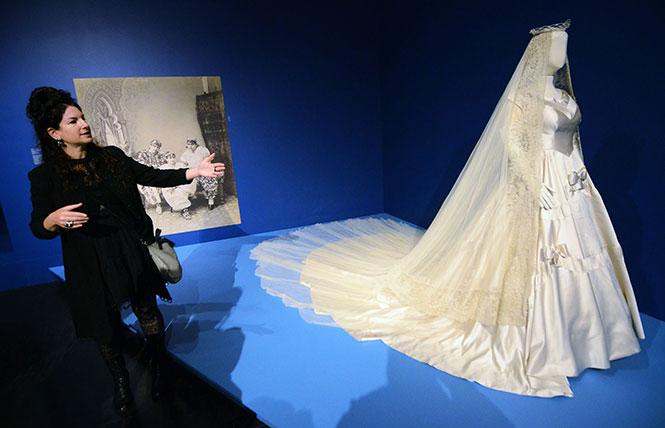 Efrat Assaf-Shapira, curator from the Israel Museum in Jerusalem, speaks about how a white wedding dress became the custom in Western societies during a tour of "Veiled Meanings: Fashioning Jewish Dress," now at the Contemporary Jewish Museum in San Francisco. Photo: Rick Gerharter

"You are what you wear" might be a colloquial, less scholarly way to frame the premise of "Veiled Meanings: Fashioning Jewish Dress," a new touring show at the Contemporary Jewish Museum. Drawn from the extensive collection of the Israel Museum in Jerusalem, a world-renowned repository of Jewish costumes, the exhibition consists of over 100 articles of clothing and textile designs from the 18th-20th centuries that channel the myriad aspects of Jewish culture and identity through the language of attire. The show posits that clothing is more than a practical body covering: it can be personal, ceremonial or laden with associations and memories. In North Africa, for instance, wearing black symbolized the destruction of the Temple in Jerusalem. Until the 1950s, it was the custom in parts of Morocco for wedding couples to wear burial shrouds under their wedding finery to remind them of the impermanence of life.

Not to be confused with the high-end "Contemporary Muslim Fashions," a big fall costume exhibition and potential scene-stealer that opens this week at the de Young Museum, CJM's show couldn't be more different in thrust and content. Its focus is not the superb lines and glamour of couture. In fact, in the main with some noteworthy exceptions, the garments are often though not always shapeless, lacking in style, and, not to mince words, on the frumpy side. The departures from dowdy rest primarily in the fabric department: the capacious Bordeaux and glittery gold brocade woman's coat with flared sleeves from Uzbekistan, for instance, or a cropped, five-alarm-fire red, silk velvet bridal jacket awash in gleaming silver/gold hand-detailing from Iran.

What makes this show most interesting is its historical and global cultural perspective. The pieces, shown in ensembles or on their own, come from over 20 far-flung countries - Yemen, Afghanistan, Iraq, Egypt, Romania, Tunisia, Ethiopia, Kurdistan, Libya, India, Algeria, and Morocco - where Jewish populations had migrated and settled. Jews adapted and modified the influences of the dominant cultures that surrounded them, while holding true to their own traditions, wearing forms of dress and practicing age-old crafts in once-thriving, vanished communities that no longer exist. A Georgian man's warrior coat trimmed with gilt ribbons and silver niello was designed to accommodate a dagger slung from a belt and a row of gunpowder cartridges across the chest in a region that, in contrast to other parts of Central Asia, allowed Jews to carry weapons. Body-concealing wraps or veils for outdoor use from Afghanistan, Iraq and Uzbekistan, were informed by local Islamic culture. The Herati chador, however, which originated in Muslim Iran and was brought to Afghanistan by Mashhadi crypto-Jews fleeing Iranian persecution in the early 19th century, differed from the burka, and was worn exclusively by Jewish women. Walking the line between modesty and audacity, and erring on the audacious side, are rigid, late-19th century, low-cut, midriff-bearing bodices (angias) in bright colors, decorated with sequins and embroidered with metallic threads. Worn by Baghdadi Jewish women in Calcutta, India, under a semi-sheer layer like a sari, they would seem to have done more to accentuate the breasts than deflect lustful male attention.

A substantial amount of space is given over to bridal gowns of various kinds. A prizewinner is a creamy tulle dress with jeweled fringe and silver tinsel embroidery. It combines a chic European cut and the kicky modern style of a 1920s flapper dress with local fabrics from Alexandria, the ancient capital of Egypt, which was a fashionable international hub during the 19th and early 20th centuries. For the demure at heart, a tasteful winter-white silk satin gown with feminine silk charmeuse bows attached to a long skirt, a classic from late-1940s New York, was inspired by Queen Victoria's 1840 wedding dress.

One of the problems affecting costume exhibitions, including this one, is that fashions on mannequins, no matter how beautiful, appear inert, even ossified without the animating qualities of a live human being wearing them. Enlivening what's on view are several haunting, enlarged, black & white archival photographs of Jews from many nations and eras seen in garments similar to those in the exhibition. Displayed on gallery walls and running in a loop on oversized suspended monitors are images of a young married couple decked out in full regalia, their faces full of hope, after their ceremony in 1927; a trio of feisty Jewish women communing in a Tunisian courtyard circa 1895; and a 1930s bride in Fez, Morocco, who's a ringer for a young silent film star, adorned by exquisite jewelry and a swalf, or head covering, with a band of delicate beading edged in tiny pearls.

An elaborate, early-20th century, plum velvet, floor-length "bindali" wedding dress, embellished neck-to-toe with golden Turkish baroque embroidery, may have belonged to an aristocratic Jewish woman of the Ottoman Empire and been part of her dowry. The sumptuous creation, which likely would have been repurposed for a synagogue's Torah ark curtains after her death, is exhibited adjacent to a large, antique photograph of a bride in a nearly identical gown; alone on an ornate love seat, she looks solemn, perhaps contemplating what her future holds. The show's procession of individuals in their prime, now long gone, is unusually moving, an inspired touch that feeds the desire to know who these real, flesh-and-blood people were, and what their lives were like. If only there had been more of them here, tugging us back into the past and reminding us of the fleeting nature of time.