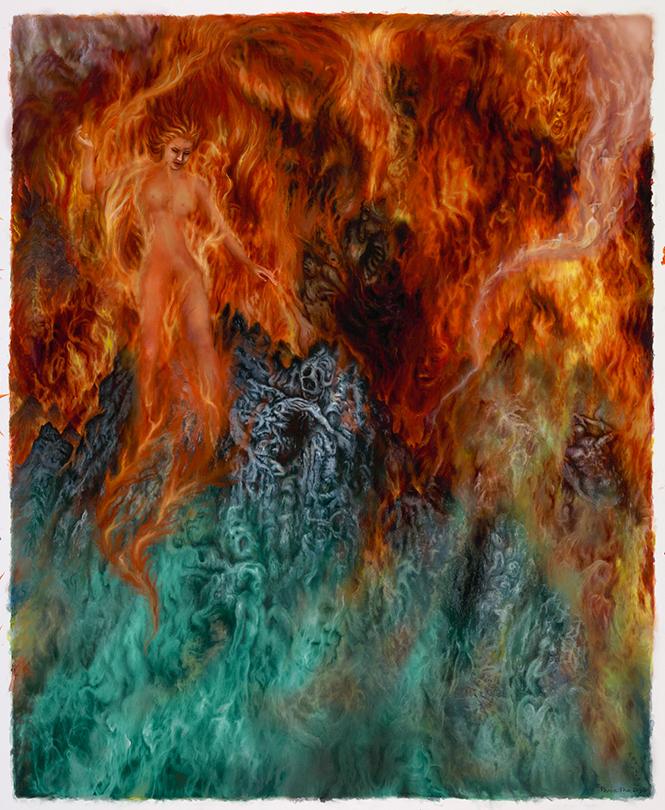 Packing a helluva title, the Asian Art Museum's "A Guided Tour of Hell" proves that good and sometimes wicked cosmic things come in small packages. Over the last few years, AAM has made tentative steps towards modernity with contemporary art exhibitions that have struck out more often than not, but that's not the case this time. The genesis of the current adventure - and adventure is the correct term - is a deeply human one. It started six years ago when a beloved Buddhist teacher, Sam Bercholz, was hospitalized after a heart attack. Though his heart stopped and he was declared dead, he came back to life a few minutes later, bringing with him hellish tales of the great beyond.

Shaken up by his near-death, afterlife experience, and intent on sharing it, he reached out to Pema Namdol Thaye, a renowned, L.A.-based Tibetan Buddhist thangka painter with a love of graphic novels, who helped realize his apocalyptic inner visions. Together they published an illustrated memoir. An exploration of their collaboration, this intellectually rich and visually potent show, based on Bercholz's amazing account and featuring 22 of Thaye's hallucinatory acrylic paintings, is a mix of ancient theology, karmic afterworlds, spiritual wisdom and visceral contemporary art with an edgy graphic novel aesthetic. Think of it as a Buddhist "Dante's Inferno" for the modern age. If J.M.W. Turner went to hell instead of to sea, partnered with Hieronymus Bosch, and William Blake pitched in, this is what they might have spawned. 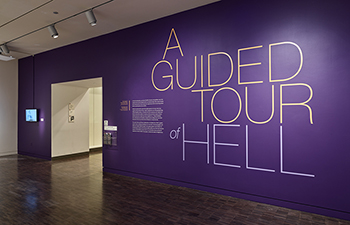 On his wild ride, Bercholz hurtled through horrifying karmic suffering, tornados of fire, prisons of glacial ice, and seas of the afflicted and tormented, before he emerged on the other side released from the toxic, often self-induced states of humanity. Along the way, he encountered a variety of demons and hell beings, each symbolizing a baddie human trait: greed, envy, hate, materialism, excessive yearning. One unlucky entity Thaye depicts demonstrates there's hell to pay for romantic obsession. Drawn by the voice of his earthly lover with a promise of reunion, a man climbs a tree where she claims to be imprisoned, is torn to shreds by razor-edged leaves, and has his heart plucked out by an iron-beaked parrot.

The roiling paintings are accompanied by a handy brochure with explanatory paragraphs from Bercholz's story. Armed with the guide, one embarks on the thrills and chills of a queasy whirlwind tour that's unlikely to generate return business, at least not by choice. First stop is "Descent," where Bercholz's consciousness expands into the entire cosmos, visualized as a floating transparent sphere penetrated by a shaft of bright white light from above, piercing through sulfurous orange flames that lead, presumably, to The Gates of Hell, portrayed as a vortex of crimson clouds that one enters at one's own risk. Retribution, described as "hot hells in which beings burn with mutual rage," looks like the fiery battle waged for Middle Earth in "The Lord of the Rings." Under ominous storm clouds, a perpetual conflagration on the horizon and a pile of twisted bodies reflect the destructive cycle of anger, punishment and retaliation. "Demolition" is a scene that could have been lifted from the dystopian, smog-clogged universe of "Blade Runner," where a computer genius who devised the poison gas that ended him is now doomed to repeat the instant of his death over and over. He's caught in mid-air, thrusting himself over a wall, the city his technology built and ruined in the background.

Bercholz also met ghostly characters whose failings condemned them to repugnant fates. Hell Sewer contains the oversized, grotesque head of a sadistic military dictator who avenged his father's murder with murder upon murder, and became what he reviled. After death, he's forced to feast on a putrid swamp of excrement with a little help from his friends. Surrounded by nauseous vapors, the ill-favored grey corpse of a suicide bomber in Voyage swims in fetid waters teeming with body parts of fellow fanatics, forever connected to the enemies they blew up. Like a latter-day Gulliver strapped to frozen ground by Lilliputians, the Frost Giant, credited with building a doomsday machine that triggered nuclear war, has been plunged into a world of kryptonite pinnacles, the cavity of his eviscerated body swarming with the people he destroyed. Relief from this pageant of ugliness and pain arrives, and none-too-soon, in the form of an angel of mercy, Janna Sophia, a female answer to the Buddha of Hell, whose name is a clever hybrid of the Sanskrit term for mystic insight and the Greek word for wisdom. A longhaired, greenish-gray embodiment of compassion and benevolence hovering over the trials of hell beings, she bears a passing resemblance, in hue and imposing size, to the Statue of Liberty.

After his arduous travels, Bercholz finally achieves Liberation. It's envisioned as a vast, heavenly oasis of converging rivers of beings, delivered from their respective tortures to a higher realm, and it's where his journey ends. The trip may have been the ultimate learning experience, but what a brutal way to "get woke." It makes Scrooge's Christmas Eve awakening seem like a walk in the park.