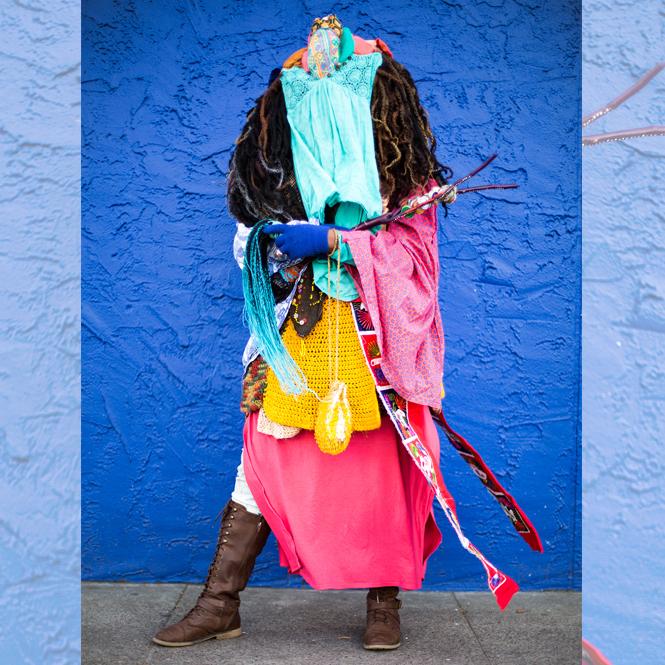 "Some people in the art world say that #MeToo has gone too far. What modern misogynist will be yanked from museums next? Gauguin? Picasso? I say, sure, why not? Let's set them aside for awhile, give them a rest, make room for what we never see, which means art by almost any woman you can name." - Holland Cotter, The New York Times.

Women are feeling and flexing their power, the power that rightfully belongs to them as human beings and as the majority of the population. What a heartening thought that is, especially during Women's History Month, and with the arrival of two thoughtful gallery shows that address female presence - and its absence - through different prisms.

According to a 2014 report, 64,000 black women and girls had gone missing nationwide, victims of sex trafficking, kidnapping or other kinds of abuse and violence. Then there are those who number among the metaphorically missing: black women who have been unrecognized, overlooked, or simply erased from the annals of history. In "The Retrieval," Kenyatta A.C. Hinkle's moving solo show at the San Francisco Arts Commission's Main Gallery, the African American artist casts a spell "unghosting the ghosted." Dancing to the music of the African Diaspora in her studio, Hinkle wields handmade brushes almost as large as her own body to channel the spirits of the disappeared for her ongoing series "The Evanesced." Lined up in three long tall rows on the far wall of the gallery are over 60 mesmerizing India ink and charcoal drawings, layered with meaning and imagery on translucent Dura-Lar paper, some with silhouettes limned in white acrylic paint. "Smoke Women" emerge from or merge with swirling fog, tornados of grey and clouds of ash like shapes rising from embers of a dying primal fire. One sees arms reaching for the sky, multiple faces peering through the haze, squatting women, regal eminences, beings that are half-human, half-deity, a traveling angel hoofing it down the road, vulnerable bodies dismembered or upside-down hurtling toward Earth - all emblematic of vanishing selves. It's as though one has stumbled onto a ritual ceremony, an impression reinforced by soft chanting that wafts through the room.

Hinkle conjures ghostly presences whose majesty can be felt in art that mourns absences impossible to quantify. Rooted in writings and recordings black women left behind and investigations of conquest, colonialism, and the abuse of power, the artist has invented a cosmology and language all her own that's expressed in "The Retriever," a nomadic Kentifrican Ashentee Healer who carries incense smoke and fire, "renders the invisible visible," and negotiates between the living and the dead. This enigmatic figure wearing dreadlocks and draped in beads and vibrantly patterned African fabrics, turquoise linen hiding her face, is prominently displayed in the center of the gallery, and also appears in a performance video that follows her sojourn from the Tenderloin to the steps of City Hall, tending to the wounded psyches of abused and disappeared souls along the way. Through April 7. www.sfartscommission.org.

It wasn't so long ago that the Guerilla Girls posted billboards all over New York City asking the question, "Do women have to be naked to get into the Metropolitan Museum?" That was in the late 1980s, when less than 5% of the artists in the Modern Art sections were women, but 85% of the nudes are female. Have things changed? The answer is not enough. "Women in Art: GREAT artists who just Happen to be Women" at Chloe Gallery in North Beach calls attention to a male-dominated art history, and the disproportionately small amount of exhibition space allocated to female artists compared to their male counterparts, while providing something of an onsite corrective, at least for the month of March. The free-ranging, expansive show features the works of 11 women - all painters, save one - representing 200 years of Modern and Contemporary Art in an array of styles from figuration and landscape to Pop, Realism and Expressionism.

The exhibition's top-liner, pioneering feminist artist Anna Walinska, was a prescient early-20th-century modernist who painted the forerunner of the pink pussy hat, left New York at 19 to study painting in Paris where she was Gertrude Stein's neighbor, traversed the world solo aboard prop planes in the 1950s, and kept a diary of her adventures. She combines elements of Cubism, the saucy denizens of Toulouse-Lautrec's demimonde and the warm intimacy of Bonnard in her striking portraits of family, friends and, on occasion, herself.

On the other side of the spectrum in terms of era is the 20-something American painter Isabel Emrich, who owes a debt to the grandmother who once carted her up to the cliffs above the ocean on the Southern California coast to paint outside. Emrich's fluid paintings, poised at the intersection of abstraction and figuration, explore the luminous properties of water, and the sensation of being submerged and enveloped by the sea. Also included are works by the gallery's owner, Amy Nelder, a modern still-life painter, whose teasing, romantic vignettes - a tossed-aside high heel here, a half-empty bottle of champagne there - imply off-canvas love affairs. The impetus for putting together the exhibition, says Nelder, was to find a vehicle for explaining women's rights and empowerment to her eight-year-old daughter. "There have been enough men who've walked into my public studio over the last nine years who looked at my work, proclaimed themselves amazed by my virtuosity, then said, 'Wow! I never thought this was painted by a woman!' I think we'll keep doing this every March until I don't hear that anymore." Artworks by sculptor Paige Bradley, Carrie Graber, Renee DeCarlo, Cheryl Kline, Cristen Miller and Jennifer Vranes, among others, are on view. Through March 31. www.chloefinearts.com