Painter Poet of the Gay Counterculture 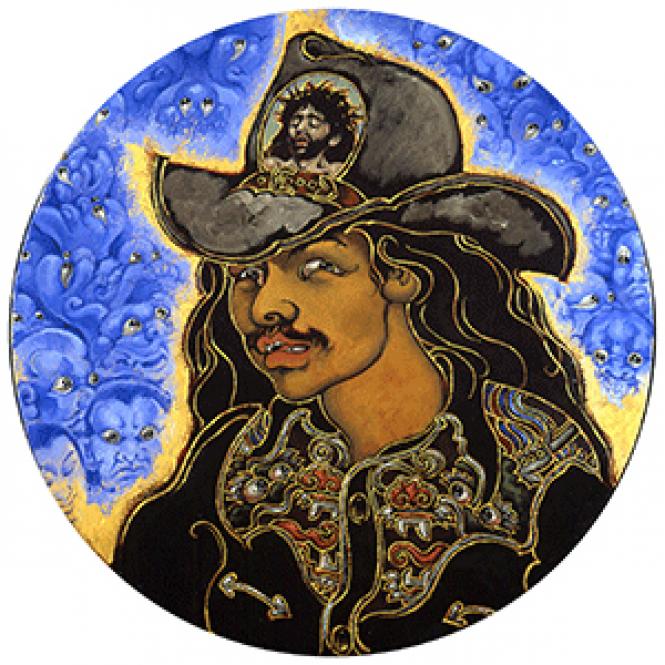 Homoeroticism meets quasi-social realism; prisons house lounging, come-hither inmates; and firemen steal a kiss against a backdrop of urban blight in the art of Martin Wong. The openly gay Chinese-American artist, who trained as a ceramicist, hawked his talents as a street portraitist in the city and in his student days at Humboldt State. Vestiges of those artistic origins would remain throughout a 30-year career cut tragically short in 1999, when he died from complications of HIV. To promote those quickie portraits he dashed off on the streets of Eureka, Wong coined the snappy moniker "Human Instamatic," which gives the handsomely presented retrospective now at the Berkeley Art Museum its name.

He came of age in San Francisco when the Beats were exuding stream-of-consciousness cool, the counterculture was in bloom, R. Crumb and underground commix ruled, and "Pink Flamingos" sensation Divine was performing with the Cockettes. He's in the guise of a red-kerchiefed babushka in one of Wong's earliest paintings; sorry to say, it's not in the show. Wong connected with the troupe's founder Hibiscus, ne George Harris III, Jr., who later established the Angels of Light, for whom Wong designed trippy theatrical sets and props. Wong and Divine are seen in a few old photographs here.

A group of acrylic self-portraits from the early 1960s captures a self-taught artist in the making, a sensitive, boyish young man on the cusp: Tender, expectant, watchful and waiting on the larger world with a certain questioning intensity around the eyes. But in the large, Peter Max-ish, medallion-shaped self-portrait from 1993 that catches the eye upon entering the exhibition, he's grown cockier. Wong portrays himself in a dandy's cowboy hat and fancy embroidered shirt of the same rodeo vintage, his head haloed by a frisson of gold dust and bug-eyed blue demons. The demons most likely are a throwback to his exposure to Himalayan art while in college, an era that produced "Untitled (Thirteen Skull) Plaque" (1971), a charred bas-relief in a small open box containing rows of miniature hollow-eyed skulls like an ashtray with human remains.

But it was after 1978, when he had moved on from the hippie-dippie, androgynous Northern California scene to a harder-edged, sexually loaded New York City pulsating with leather bars and sex clubs fashioned on torture chambers and dungeons, that Wong really hit his stride. He settled on the gritty Lower East Side, where he circulated among the area's queer, Puerto Rican and black communities, and turned his energies to painting. The loamy sienna and burnt-rust earth tones from his ceramics days meshed with the dilapidated tenements and brick walls of his cityscapes, while the chaos and sexual potential of his teeming working-class neighborhood fueled the erotic in his life and art, culminating in hallucinatory visions such as "Mi Vida Loca" (1991). The imposing, industrial brick edifice, part chimney, part well-endowed male genitalia, has a prodigious phallus rising up the center, anchored by balls at the base. The image is incongruously framed in ornate gilt suitable for an antique mirror; the effect is jarring, simultaneously frilly and bulldog macho.

Judging from several canvases, Wong had a serious fireman fetish - and who doesn't? He went so far as to keep a fireman's uniform in his apartment, and prevailed upon his friend Stevy, a graffiti artist, to pose in it. Stevy, gamely seated in a bathtub, helmet on his head, appears vaguely amused in a 1990 painting bearing his name. In the dark space above him floats a beer can, a bar of soap, and the constellations of the night sky, a prevalent Wong motif, along with a subtle cartoony aesthetic. Undeterred by colliding headgear, a pair of male firefighters in the mood for love smooch in the shadows of a towering, graffiti-covered housing project - and it's not the building that's on fire ("Big Heat," 1988).

Wong seems to have invested reams of fantasy in prisons and their captives: young, muscular, sexually hungry, available inmates with time on their hands and carnality on the brain. The promisingly titled "Reckless" (1991) showcases a reclining, brown-skinned outlaw, peering lazily through the bars of his cell. He's nestled in his bed, his buff naked body strategically covered by white sheets. A cold, steel-gray sink to his left interrupts the idyll. "Top Cat" (1990), modeling form-fitting underwear like a criminal version of a Calvin Klein ad, leans backs, displaying his tattooed physique.

The concrete cells are white-washed and the perspective skewed, but the exterior of the prison is another matter. From outside, it's a fortress with dirty chalk walls and narrow slits for barred windows, the perimeter an impregnable black enclosure topped with barbed wire ("47-04," 1992).

In "Penitentiary Fox" (1988), the Puerto Rican poet and playwright Miguel Pinero ("Short Eyes"), Wong's friend, sometime collaborator and lover, stands in front of the gates to Sing Sing, where he once served time for armed robbery. Pinero is positioned between two watchtowers, while the prison walls behind him are magically transparent, revealing tiers of cells bustling with activity, like the set for Elvis Presley's hit "Jailhouse Rock."

In 1994, following his HIV diagnosis, Wong returned to his parents' home in Chinatown. With his world shrinking and life receding, he created one of his most overtly emotional works, the heartbreaking "King of Pain" (1997-98), where a man whose face is obscured by a white baseball cap lays crumpled on the floor in agony beneath the words of the painting's title. They're written in cursive on a blackboard grid, like the last grace notes of a musical score.

The Lost Leonardo: art world discoveries and deceptions
Sign up!