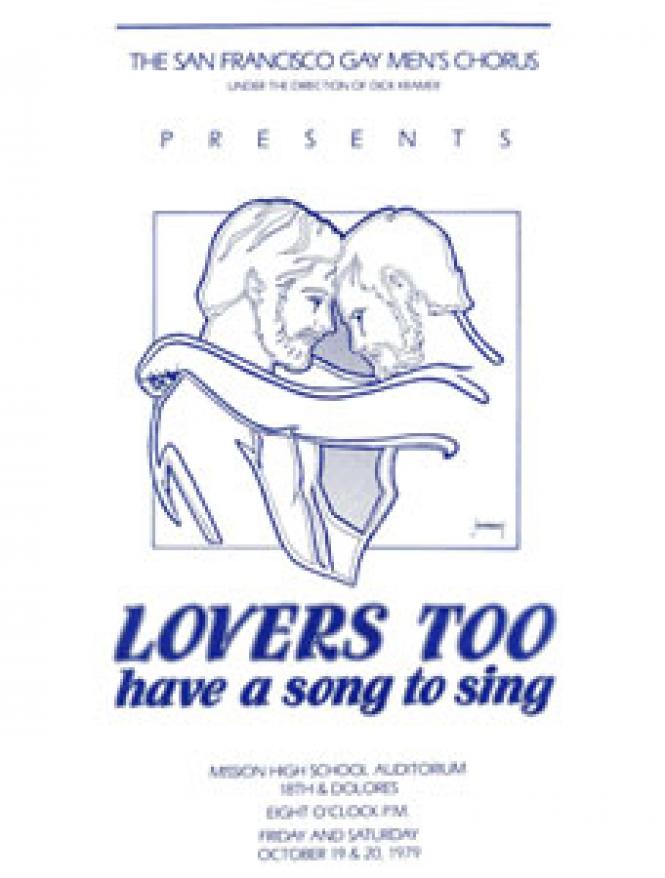 Poster for a 1979 concert by the San Francisco Gay Men’s Chorus. The San Francisco Chronicle declined to publish the graphic because the now tame-looking illustration did not meet its standards of appropriateness  (Source:Courtesy the GLBT Historical Society, San Francisco)

The San Francisco Gay Men's Chorus is now a well-established mainstream city institution with an international reputation, but 35 years ago it was quite another story. The colorful development of this beloved organization over the last three decades, and its engagement with historical events affecting the gay community, unfold in streamlined, informative fashion in The San Francisco Gay Men's Chorus: Celebrating 35 Years of Activism Through Song, a lovingly researched show at the GLBT History Museum.

The exhibition traces the evolution of the SFGMC, the first openly gay choral group in the world, from its inception during the emotional tumult of 1978, when a newly formed, fledgling chorus of 100 sang in public for the first time on the steps of City Hall the night Harvey Milk and George Moscone were assassinated. The saga continues through the anguish of the AIDS crisis and the LGBT community's fight for equality on multiple fronts to the present. Today, the group's 300-plus members give concerts at the San Francisco Opera House, perform commissioned original works at class-A venues, and play to capacity crowds at the Castro Theatre on Christmas Eve, a holiday tradition since 1990. "The chorus has always been a microcosm of what's going on in the greater gay community, and we've been out there since Day 1," notes exhibition curator Tom Burtch, a SFGMC veteran of 29 years. "We've been able to survive and thrive, but the thrust of the show - and the issue it addresses - is whether a gay men's chorus is still relevant."

Divided into chronological sections laid out on six wall panels, each covering a specific period, the exhibit makes liberal use of archival materials such as newspaper clippings, posters, photographs, playbills and other ephemera. The story opens with "Awakened by Tragedy," a chapter that begins in 1978, "an unbelievable, magical year in San Francisco," Burtch says, that saw Milk elected to the SF Board of Supervisors and the appearance of the first gay flag. At the same time, the group fought to have its programs publicized in the Chronicle - the offending illustration deemed inappropriate for a family-friendly paper is here - and for permission to perform in San Francisco churches, a battle they won in 1979, when they participated in the first Pride concert held at Grace Cathedral.

From 1981-83, the chorus was riding high, buoyed by the release of their first album and rave reviews in The New York Times, The Boston Globe and The Washington Post, some of which are displayed here, along with the super-sized key to the city presented by Dianne Feinstein at a ceremony at Davies Symphony Hall. A photo memorializing the event - it was first time a gay group had been so honored - is on view. "We were a big deal," recalls Burtch. But there was trouble on the horizon. A headline on the cover of a 1981 issue of The Advocate trumpets, "On the Road with SFGMC," while in the lower right corner is the ominous query, "A Gay Cancer?" It was a harbinger of the looming catastrophe explored in a section titled "Singing for Our Lives," which chronicles the response of the chorus to AIDS (1984-98), a grim era that took the lives of hundreds of members, including SFGMC founder Jon Sims. At one point, the disease thinned the ranks to a mere 96 voices. Despite the losses, the chorus kept a high profile, performing, raising money for the sick, and garnering media attention for the crisis. A New York Times front-page article reads, "In Face of AIDS, a Chorus Stands Taller"; and Singing Positive, an award-winning documentary, was produced by a French TV crew that spent a year focusing on the impact of AIDS on several chorus members.

Not surprisingly, the most exciting aspect of the show is the music, and one wishes that there were more of it. Utilizing a classy touch-screen component with high production values, one can access excerpts from SFGMC performances such as "U.S.S. Metaphor or The Lad That Loved a Sailor," a parody of Gilbert and Sullivan's H.M.S. Pinafore that mercilessly skewers the military's "Don't Ask, Don't Tell" policy with wicked double entendres, a transgender character, a large cast of boisterous, closeted sailors, and the former chorus chairman and choir director in drag with white gloves, ladylike handbags and bulging biceps that cannot be constrained by a skimpy pink halter dress.

Though they were a scarce commodity in the early days, gay composers write the majority of SFGMC's current repertoire, which keeps the group connected to the concerns and tastes of modern audiences. Last year's productions included "I Am Harvey Milk," an original work with a stellar Broadway pedigree that premiered the same day that the Supreme Court ruled DOMA unconstitutional. On tap for 2014 are a pair of commissioned pieces: Jake Heggie's "For a Look and a Touch," about a gay couple who survived the Holocaust; and Tyler's "Suite," based on the story of the gay Rutgers University student who killed himself after his roommate secretly filmed his assignations in their dorm.

In his review of the landmark 1979 concert at Grace Cathedral, the B.A.R.'s George Heymont synthesized the prevailing theme of this exhibition: "Music is a powerful weapon with which to confront the forces of political oppression," he wrote. "Whether it be the head of an organized religion tackling the forces of Communist oppression or the musicians of the Gay community performing on the sacred grounds of organized religion, music is perhaps the greatest equalizer of all."