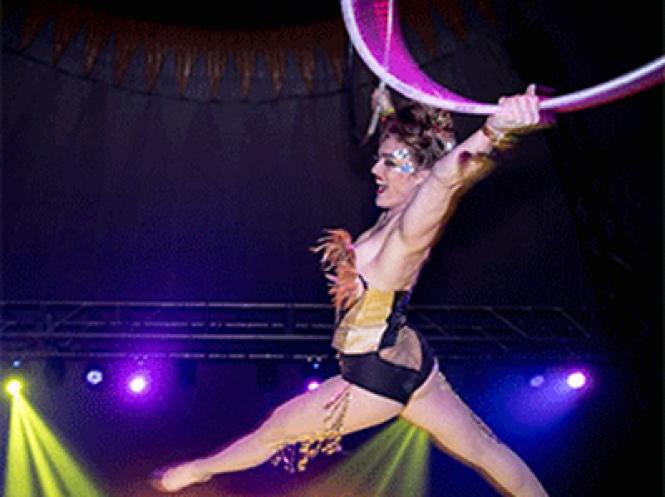 Though she enjoyed being a firefighter, which she had done for seven years up in Humboldt County, Erin Shredder felt that something was missing from her life.

"It was exciting," she said of her former career. "I liked the adrenaline of it, and I liked helping people. But when I went to Burning Man, it changed my life and opened my perspectives."

It was a woman in a hula hoop at Burning Man who set Shredder's life on its current course.

"She was creating a whole new way of modern dance," Shredder recalled. "It was very empowering and helped me tap into my more elegant side."

Shredder left her life as firefighter. These days she does massage therapy and teaches yoga in the East Bay. She also performs in The Soiled Dove, Vau De Vire Society's naughty but nice interactive dinner theater show, which is now playing under the Big Top at The Point in Alameda. The Soiled Dove will run every Friday and Saturday through July 1. It's a return engagement for The Soiled Dove. The company enjoyed sold out runs in 2014, 2015 and 2016.

"We take place in the past," Shredder explained as she described the show. "The Soiled Doves are performers who come out and offer their support to a brothel. Some of them are real characters, so you get a history lesson while you get your mind blown."

The show, Shredder tells us, is performed under the big top.

"I'm a circus performer," she said. "It's really fun. I perform twice a week and it's always a different show each time."

Shredder's performance is an aerial acrobatic act. She calls it aerial hula hooping.

"This job is amazing," she said. "I do a lot of physics in my head; everyday is different. I can't do autopilot."

She calls her act, and the show itself, "an exhilarating dinner theater." She added that designing her own costumes was a big part of the joy she takes from her work.

"It's more than showing up and dressing up," Shredder said. "It's about telling a story with a costume."

Many of the press releases for The Soiled Dove refer to Shredder as a 'lesbian acrobat,' but in her day-to-day life, she refers to her sexuality a bit differently.

"I'm sexually fluid," she said. "I'm an open individual. I try not to fit into any label. I'm queer. I'm attracted to a person, the organs don't matter. We don't have to fit into society's box."

Shredder feels that staying humble is a big part of achieving success in her new profession.

"As soon as you get too confident it wipes you out," she said. "It's all about showing up for practice, doing your best and taking your time."