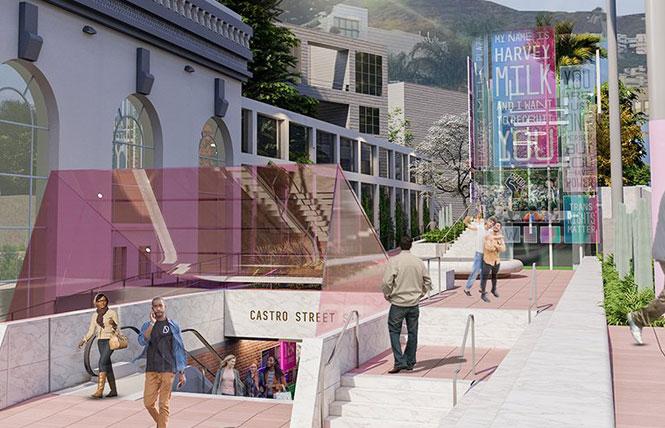 While longtime San Franciscans tend to loathe large capital infrastructure projects, there is one project that neighborhood groups and neighbors agree on that deserves public support: the long-awaited reimagining of Harvey Milk Plaza and the Castro Muni station, at Castro and Market streets.

As president of the Eureka Valley Neighborhood Association since 2020, an involved Castro resident since 2013, and a former board member of the GLBT Historical Society, I've gotten to watch and participate as the Harvey Milk Plaza redesign project began in its infancy and has now progressed to a fully formed, ready-to-go plan. The Friends of Harvey Milk Plaza organization has engaged in a robust multi-year community engagement program that has unequivocally obtained and incorporated numerous layers of feedback from a wide swath of community stakeholders. I've watched FHMP take tough feedback and truly listen to the Castro community's concerns and suggestions. What this process has created is a beautiful, popular, and most importantly usable space design that more than doubles the amount of accessible space in the plaza and creates a true public space for gathering, protesting, collective mourning, and many other functions important both to San Francisco's LGBTQ+ community and the Castro neighborhood in which it sits.

Two particular people made it their life's work to convey a message that this project was controversial, that it violated environmental protection laws, that it was deeply unpopular. One of them is the original architect of the current iteration of Harvey Milk Plaza (as well as the much-maligned Civic Center Station and others). Neither of these people live in San Francisco, both have ulterior motives, and neither they nor anyone else has presented a viable alternative plan to the one presented by FHMP. They used misleading and allegedly illegal tactics to obtain signatures in an effort to prove that the community was united against the project, but the question presented on those signature-gathering sheets and the concept that those signatures were used to support were very different. Unfortunately, their words and actions have created a feeling among many in the community that this project is "controversial" or "unpopular." I am here to tell you that these representations are flat-out wrong.

The plaza, as it sits currently, is constructed entirely of concrete. The staircase leading down is dangerous as the steps are all angled; I have personally watched (and helped) numerous elderly and disabled people who have slipped and fallen down these stairs, especially when it is raining. The bottom of the stairs floods whenever there is heavy rain, and there is no drainage. Next to the bottom of the steps is a huge, completely fenced-off, sloping area that is not publicly accessible or particularly well-maintained. The only nice feature is the escalator with colored lights, which was installed by the city a handful of years ago. And, worst of all, despite the name "Harvey Milk Plaza," the only tribute to Milk, the Castro's most beloved supervisor, is a small, unmaintained set of black-and-white photographs along a fence and a single bronze plaque.

Milk, whose legacy far outshines the confines of this opinion piece, was a tireless fighter for LGBTQ+ equality, equity, culture, and people. His fierce oratorical skills brought him international notoriety, before and after his death. His horrifying assassination by another member of the San Francisco Board of Supervisors united the LGBTQ+ community in 1978 and Milk's name is now an international symbol of the queer and trans liberation movements. But Milk centered his life on the Castro. His camera shop at 575 Castro Street was more akin to a community center than a business. His political power grew from the Castro and was centered in the Castro.

The Castro deserves a real monument that serves the memory of this great man. This is why a wide swath of Castro-based organizations, including the Eureka Valley Neighborhood Association, the Castro LGBTQ Cultural District, the Castro Merchants Association, the Duboce Triangle Neighborhood Association, the Harvey Milk LGBTQ Democratic Club, the Alice B. Toklas LGBTQ Democratic Club, and the Castro/Upper Market Community Benefit District have all voted to support the renovation's current iteration. All of these groups, and more, want to see the creation of a fitting tribute to Milk and accompanying public park space that is in very short supply in the neighborhood.

If you have further concerns about the Harvey Milk Plaza redesign project, I strongly encourage you to reach out to FHMP; it is truly a grassroots effort and will be more than happy to hear your concerns. You can check out the project in its current form and see contact information for the group here.

Alex Lemberg (they/them) is the president of the Eureka Valley Neighborhood Association, a resident of the Castro, and an attorney in private practice also in the Castro (with the world's easiest commute). You can learn more about Lemberg here and more about the EVNA here.