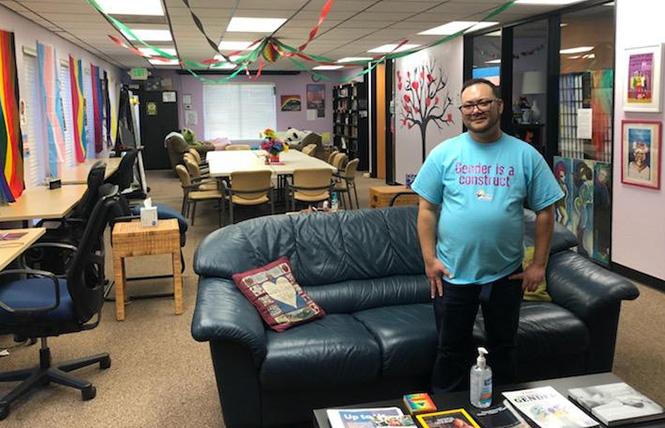 Closed for much of the past two years due to the COVID-19 pandemic, the San Mateo County Pride Center is slowly reopening to the public. It is one of several LGBTQ community centers in the Bay Area to relaunch in-person services indoors.

While it was shuttered to clients for 18 months, the Peninsula center took the time to remodel its space to make it more accessible and user-friendly. Furniture easier for older adults and people with disabilities to get out of replaced the former furnishings.

"You don't have to hire a crane to get you out of it," joked Francisco "Frankie" Sapp, the center's program director, as he showed off the changes to the Bay Area Reporter earlier this month.

Since its meeting room space is only reachable via several stairs, the center set up a conference table in the middle of its main room composed of individual sections that can be moved around into various configurations.

And in light of the ongoing pandemic and expectations that some in the community will continue to want to remotely access its programs or meetings that outside groups hold there, the Pride center plans to offer virtual access via Meeting Owl Pro technology it acquired. The system is easy to set up and allows those joining in meetings online to not only see the person speaking but also wider views of the room.

"We will maintain a hybrid of in-person and virtual moving forward. It is the new reality," said Sapp. "Some older adults don't have access to online. Everyone needs something different, so we are going to be offering both, and you can decide what works best for you."

Sapp had only been in the job for a month when county health officials ordered nonessential businesses and service providers to shut down due to the health crisis. A disabled, biracial, queer, transgender man with more than two decades of experience in crisis management and harm reduction, Sapp quickly worked with the center staff to offer what services they could online.

"We had the best year ever during the pandemic," Sapp told the B.A.R., noting the center was able to offer 2,700 hours of clinical services despite its brick-and-mortar location being off-limits to the public.

The center is a program within StarVista, a $12 million social services organization in San Mateo County. It receives one of its major grants from San Mateo County Behavioral Recovery Services and partners with various agencies in the area.

Its staff has been allowed to decide on their own when they want to work from home or on-site. The center is located at 1021 S. El Camino Real in San Mateo, with a fully accessible entrance from its parking lot in the rear.

"I can just feel who was here," said Marilyn Fernando, who is queer and the center's community engagement lead. "Absolutely, we prefer to be in person with each other. You vibe off people's energy."

Sapp, who has Tourette syndrome and mobility issues, has been managing the center mostly from his Fairfield home, where he resides with his parents. He's been commuting into work when needed but will do so outside of the morning commute to cut down on his drive time.

"Everyone is all over the map," said Sapp in terms of how people are feeling about the return of in-person services at the center. "Some people aren't ready and some are testing the waters. Others are so over this pandemic they are just diving into the deep end."

Monday, October 18, the Pride Center opened to resume limited in-person services that day of the week for older adults between 1:30 and 3:30 p.m. Clients are required to make an appointment and when they arrive must have their temperature checked. Everyone is required to wear masks inside the building.

Currently being offered is assistance with applying for affordable senior housing for people who are 62 years of age older and free weekly peer counseling for people at least 55 years old.
"It has been slow going. We have not seen a lot of people on Mondays," said Ellyn Bloomfield, the Pride center's older adult coordinator.

With Thanksgiving being celebrated this week, the center is hosting a Friendsgiving lunch but at a local San Mateo restaurant at 11:45 a.m. Wednesday, November 24. People need to RSVP. It is the first such social gathering it has organized for its older adult clients during the pandemic, noted Bloomfield, who is employed by one of the center's partner agencies, Peninsula Family Service, as its LGBTQ+ senior peer counseling coordinator.

"We don't have an oven in the Pride center itself, so we are meeting at a restaurant in downtown San Mateo where we can sit outside and be together," said Bloomfield, a lesbian who lives in Foster City and formerly worked for Openhouse, the LGBTQ senior service provider in San Francisco.

In 2016, Bloomfield wrote the first grant to seek funding to launch the Pride center, which is now in its fourth year of operation. Walking back into the building this fall and seeing the remodel, Bloomfield knew it would be transformative for its clients.

"What I walked into was something that looked almost completely different than when I left. Serious thought was put into the safety for the community and staff of course, and accessibility," she said. "We want every person, even people with differing abilities, to be able to come into the center if they want to come into the center and feel comfortable in the space."

The Billy DeFrank LGBTQ+ Community Center in San Jose also recently reopened its building for indoor programs, with attendees required to show proof of vaccination and wear a mask inside. It, too, is offering various services Monday nights from 4 to 9 p.m. from HIV testing and discussion groups to game nights in its library depending on the week.

San Francisco's LGBTQ community center just resumed renting out various rooms and spaces to outside groups for events and meetings. To lure event organizers back to its upper Market Street building, the facility is offering 15% percent off its rates.

More services planned
The Pride center expects to roll out additional services in the coming weeks. Its youth drop-in programs run by Outlet are likely to restart in December, but the dates and times are still being finalized.

PFLAG monthly support meetings will begin at the Pride center starting at 7 p.m. Monday, December 13. Participants will be able to take part either in-person or by Zoom.

As for when the center will fully reopen to five days a week, it remains an open question, said Sapp. Now that booster shots are being made widely available to people 18 years of age and older, he predicted it would likely be sooner than later.

"I think we all hope it is not too far off," said Sapp.

One issue the center is confronting is that the five rectangular windows that line its main room, along with a sixth window on a different wall fronting the area, do not open. To provide air circulation the staff has been propping open several doors on either ends of the space.

"We are going to address it by having windows that open," said Sapp, who has yet to get an estimate for how much it will cost to replace the fenestration.