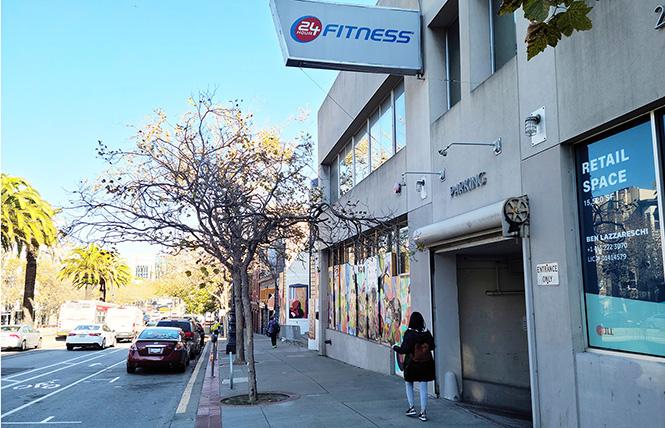 The former 24 Hour Fitness Center at 2145 Market Street is being eyed as a potential gay bathhouse. Photo: Cynthia Laird

As the Castro neighborhood loses its only gay sex club and sauna, a would-be proprietor told the Bay Area Reporter he is interested in opening a gay bathhouse nearby at a former gym location.

But before either can open again, adult business zoning rules are going to have to be changed.

"My eyes are set on the former location of 24 Hour Fitness," Curtis Chude, a gay man, told the Bay Area Reporter, referring to the site at 2145 Market Street between Sanchez and Church streets that permanently closed last year at the beginning of the COVID-19 pandemic lockdowns.

Chude's revelation about a potential bathhouse comes as Eros, the Castro's only sex club and sauna, announced it'd be moving to a location closer to downtown early next year after close to three decades in its current location. As its website states it caters to gay and bisexual men, whether they are cisgender or transgender.

Currently, Steamworks in Berkeley is the only traditional gay bathhouse open in the Bay Area. Part of a chain with locations in Chicago and Seattle, it has been open since the 1970s.

Chude, a 35-year-old IT director, told the B.A.R. that he doesn't want to open Steamworks 2.0. There will be no gym area, he said.

"For me, it's about bringing a mix of a Turkish bathhouse and a European bathhouse to San Francisco," he said, adding that there will be a "sauna, Jacuzzi, and play area" as well as testing for sexually transmitted diseases.

Chude said he wants it to be "more than just a bathhouse."

"I also want it to be a community-type place people can go to, like a place with Wi-Fi where you can sit down and meet new people," Chude said. "That's one aspect of this."

Saying that he wants to "bring a luxury to it," bathhouse patrons would be given "a nice robe and nice shoes" and would pay a monthly fee through an app.

If that location doesn't work, Pier 1 on the Embarcadero or a warehouse elsewhere might do the trick, Chude said. Chude stated that, wherever it is, the bathhouse would "be an inclusive space," and so "both trans men and women would be invited."

Chude contacted gay District 8 Supervisor Rafael Mandelman's office in June to inquire about opening an adult sex venue, according to emails obtained by the B.A.R. via a California Public Records Act request. The request asked for "any communications with would-be proprietors of a bathhouse in San Francisco between January 1, 2020 and October 18, 2021."

Mandelman's office responded to Chude with the minimum standards set by the San Francisco Department of Public Health for an adult sex venue that were set after the passage of an ordinance last year that as the B.A.R. reported lifted restrictions on operating a bathhouse in the city. 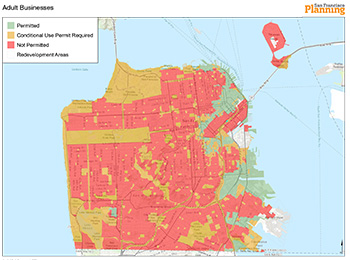 The city had placed these restrictions in the mid-1980s because of the AIDS epidemic. The rules required adult sex venues not have private rooms with locked doors, and mandated that patrons' sexual acts be monitored by staff.

Due to advances in preventing HIV transmission, such as antiretroviral therapy and PrEP, Mandelman and community leaders came to see these restrictions as anachronistic and pushed for their removal. However, as the B.A.R. reported September 3, zoning restrictions on where a so-called adult business can operate have proved to be problematic for would-be proprietors who are now interested in the business possibilities.

Right now, according to Mandelman aide Jacob Bintliff, a gay man and former planning department staffer, adult businesses are not permitted in the Castro.

Mandelman disclosed that in January he became aware of a would-be bathhouse proprietor near the leather-themed Eagle Plaza parklet in the South of Market neighborhood. Before the publication of the September story, Mandelman's office would not disclose to the B.A.R. who this was, and no communication regarding this location is included in the emails released as part of the Public Records Act request.

Chude told the B.A.R., "SOMA has come up, near the Eagle, but that's one of the areas not on the map now to open something like this." He also said that he started his inquiries in the summer, which is confirmed by the emails that've been released.

Chude told the B.A.R. that his effort is separate from Haynes and Komar's inquiries.

Bintliff stated to the B.A.R. that Mandelman would "like to get legislation introduced before the end of the year" to open up adult business zoning. He is currently pursuing similar legislation on bar zoning, as the B.A.R. reported.

The would-be bathhouse proprietors would be breathing life into a once-prominent feature of the urban gay male scene that has declined in prominence due to the AIDS crisis, the rise of hook-up apps, and the COVID-19 pandemic. Just last year, the Watergarden bathhouse in San Jose and Blow Buddies sex club in SOMA both closed.

Eros moving closer to downtown
While adult sex venues with closed doors, such as Steamworks in Berkeley, were prohibited by the city, venues where people can have sex in open spaces have opened in San Francisco. Eros at 2051 Market Street, between Church and Dolores streets, was one of those. As Broke Ass Stuart first reported, Eros has signed a lease to move "closer to downtown," though it has not as of yet disclosed where.

Eros' final day in the upper Market location it has occupied since 1992 will be Wednesday, December 15.

On Sunday, December 12, Eros will be hosting an open house from 6 to 9 p.m. to celebrate the business. There people can "hear about our exciting new space opening in 2022," according to a Facebook event page, which also states, "if you want to stay after 9, we'll give you a towel!"

Eros co-owner Ken Rowe stated to the B.A.R. that he is working with the city on zoning rules, which will have to be approved before the new space can open.

"We are sad to be leaving our place in the Castro for the last 30 years, but understand landlords change as do economics," Rowe stated to the B.A.R. "We are excited to have located a great place, closer to BART and [a] nearby parking garage, in a historic building. We hope to have all the permits and approvals in place early in 2022, so there will be a hiatus. We will be busy building out the new place and building a new website, but we will be available at the same number and email to connect with the community."

Rowe left another puzzle piece as to the new location in his statement to the B.A.R.

"Instead of one Muni station away, we should only be three stations away," he said, referring to the present location and the potential new site. Its upper Market Street location is a short walk from the subway system's Church Station.

Rowe confirmed to the B.A.R. November 23 that the new location is within the Transgender District after being asked about reports it will be on Turk Street.

"We were looking throughout the city, but especially wanted to tie into one of the queer cultural districts," Rowe stated. "We are communicating with the Transgender District staff on how we can support each other and have scheduled a face to face meeting with them early in December. With Aunt Charlie's Lounge and a number of sex positive businesses in the area, we think we'd be a good fit."

Rowe stated that "we do have a good reputation for welcoming trans guys as well as all men who have sex with men into Eros."

"Half of our current ownership team are trans men," Rowe stated. "Over the years, we've tried to support a lot of projects in the trans community, from the Trans March, the Transgender Film Festival and our project partnerships with Trans:Thrive. One of the projects in association with Trans: Thrive has been tm4m.org bringing safe sex education and practice to trans guys interested in cis guys. Another was a hugely successful quarterly trans only party held pre-pandemic."

Rowe stated that the move is due to "a generational shift in [building] ownership, like much of the city."

"Our landlord passed away a few years ago and the family trust that owned the building had a fiduciary agent tasked with selling it," Rowe stated. It sold about [a] year and a half ago to a team of property investors. They have been great and supportive during the pandemic and we wish them well. Our rent was pretty low compared to some property in the area, and they do need to cover their investments. We weren't able to consider the higher rate, but we were able to get an extension till now at our old rate."

In spite of the move, Rowe wants the club to continue as a Castro institution.

"We hoped to stay in the immediate area and had assistance from Supervisor Mandelman and his great staff. ... We tried to see a number of properties in the Castro, but could only view those that were interested in us as tenants," Rowe stated. "We aren't leaving the Castro, since we hope to be more involved in the Castro LGBTQ Cultural District, Castro Street Fair, and support all our friends and family that reside and visit the area."