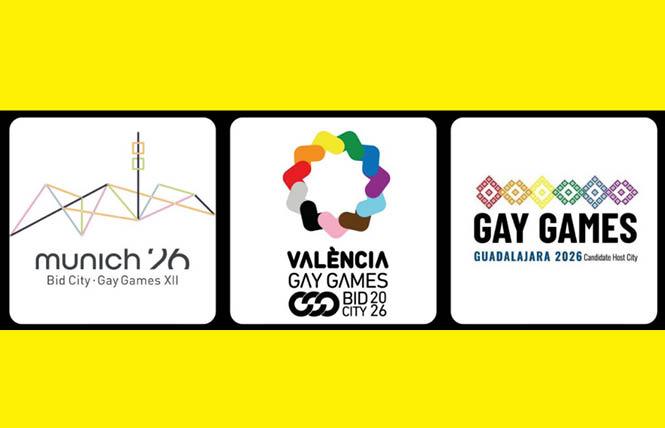 Munich, Germany; Valencia, Spain; and Guadalajara, Mexico are in the running to host the 2026 Gay Games. Photo: Screen composite

Team San Francisco has announced that it is not waiting for final presentations to be made this week by organizations bidding to host the 2026 Gay Games: it is voting for Valencia, Spain.

Update: And apparently most other voters agreed. Valencia has won the bid to host Gay Games XII in 2026. The Federation of Gay Games membership vote was taken Thursday, November 11. Valencia and the FGG will now enter into negotiations to sign a formal, final agreement. The proposed dates are May 27 to June 7, 2026.[End of update.]

"When asked which of the three potential host cities respondents would prefer: Guadalajara in Mexico, Munich in Germany, or Valencia in Spain by a two-to-one margin, the clear preference was for Valencia in Spain," Team SF stated. "As a membership organization therefore, our two Team San Francisco delegates to the Federation of Gay Games Annual General Assembly have been instructed to reflect the preferences of our San Francisco Bay Area athletes and cultural participants by voting for Valencia, Spain."

Site selection uses ranked-choice voting. The Team SF statement did not mention what its second choice was.

Normally, some organizations and board members decide what locale they are going to vote for before the meeting even begins — which, according to FGG protocols, they are not supposed to do — while most wait through the entire process and every opportunity to gather information before deciding how to vote. It is those uncommitted votes the bidding organizations hope to sway when they make the final presentations. In the past, those final presentations have carried crucial weight. In the 2010 Gay Games selection cycle, for example, Paris appeared to be the frontrunner going into the general assembly, but lost out to Cologne, Germany after some testy exchanges between FGG members and the Paris bid representatives. In the next cycle, what seemed to be a two-city race between Boston and Washington, D.C. turned into a runaway hit for Cleveland, Ohio's very lively and folksy presentation.

Then again, these are not normal times. COVID-19 concerns and restrictions forced the FGG's 2020 assembly to be held virtually in early 2021 instead of in person in late 2020. It forced the FGG to cancel its plans for an in-person 2021 meeting in Hong Kong, setting up the current hybrid event in Brighton, United Kingdom with some participants attending online rather than in-person. That limits the opportunities for FGG members to have candid side discussions about the bids to exchange thoughts and observations.

Representatives from Guadalajara, Munich, and Valencia will make presentations to the assembly and answer questions Wednesday, November 10, immediately followed by a presentation from FGG site selection inspectors. On Thursday, November 11, the FGG will discuss a SWOT analysis (strengths, weaknesses, opportunities and threats), a final question and answer session will be held with the bidders, and the selection vote will be held at the end of the day.

The bidders have already presented extensive written bids, responded to rounds of questions, and been visited by site selection officials who met with host organizers and inspected proposed venues. The formal presentations tend to be fairly extensive and endlessly enthusiastic to provide each bidder with one last chance to convince voters to select them.

FGG board members each have one vote in site selection. Full assembly members — regional multi-sport organizations and international single-sport or cultural organizations — each have two votes.

The Team SF statement did not say how many members participated in the survey, what percentage of its membership that represented, or what sports provided the most or least responses. It did not indicate why its members wanted Valencia to host the Gay Games rather than Munich or Guadalajara. It did say that 53% of the respondents said inclusion of their chosen sports was a primary factor in choosing and "only 29% felt LGBTQQI+ rights or expanding the Gay Games model into new territories was a primary factor."

That's pretty much the opposite of what FGG member organizations are asked to do when they vote on any FGG matters.

FGG voters are supposed to set aside personal or provincial concerns when they vote. They are supposed to be concerned with the growth and effectiveness of the Gay Games mission to make sports more accessible and inclusive for those who are too often blocked from the benefits of sports by other organizations and events.

They are supposed to be selfless.

Reality is any of the three bidders appears to be capable of putting on a successful Gay Games that will serve its participants well. Once that threshold is met, it becomes more important to step back and think in terms of broader mission goals and values. What potential host represents the best chance to fulfill and expand the mission?

Heading into the final presentations, I would say that Guadalajara is strategically the best choice.

Rightly or wrongly, the FGG chose Hong Kong to host Gay Games XI because it wanted to enter the vast but underserved, virtually untapped Asian market. The political climate and COVID-19 have thrown a monkey wrench into those plans and we must wait until 2023 to see how it all works out, but the concern about wanting to bring Asia into the fold was understandable.

However, there is little existing LGBTQ sports infrastructure in Asia on which to build Gay Games efforts. By contrast, there is a strong, growing LGBTQ sports infrastructure in Latin America that is attuned to the Gay Games brand and mission. Clubs and individuals have turned out in respectable numbers in past Gay Games. Representatives have attended FGG meetings and made attempts to get involved.

Guadalajara represents the first best chance to tap that market and serve those potential constituents. Every Gay Games thus far has been in Western Europe or in a former British colony. Guadalajara would break that pattern and open the Gay Games experience to an entirely new language group.

Valencia would also open up the Spanish-speaking market, but either it or Munich would be the fourth time the Gay Games has been in Western Europe since competitive bidding was introduced for the 1994 quadrennial, compared to three times in North America, once in Australia, once in Asia, and never in Africa, Central America, or South America. Selecting Munich would also make Germany the only country other than the United States to host the Gay Games more than once.

In other business, the FGG will elect new officers, consider bylaw changes and hear reports from Hong Kong organizers.