LGBTQ candidates score milestones in elections across US 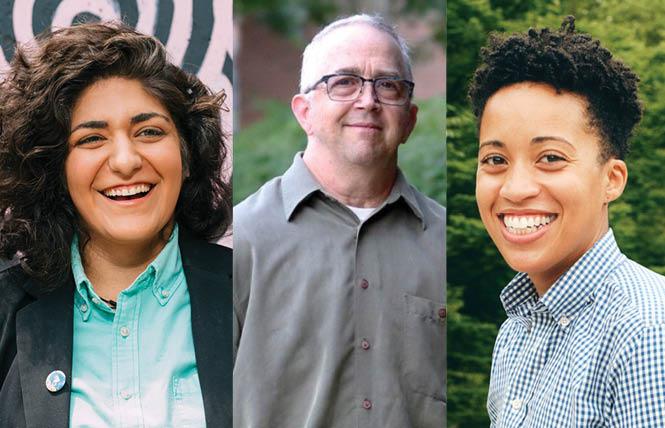 Liliana Bakhtiari, left, won a seat on the Atlanta City Council; Dion Manley won a seat on an Ohio school board; and Crystal Hudson became one of two Black LGBTQ women to win seats on the New York City Council. Photos: Courtesy the campaigns

It was a hard night for Democrats November 2, as candidates for governor in two heavily Democratic states lost enormous support — and at least one of the two seats — to Republicans. But LGBTQ candidates scored some milestones according to preliminary returns.

The LGBTQ Victory Fund, a national group that promotes and supports campaigns of openly LGBTQ candidates, said it was tracking at least 242 openly LGBTQ candidates who were on the November 2 ballot. Although not all the races it was tracking had reported by press time on the morning of November 3, it noted that, so far, 59 had won, 50 had lost, and 22 had advanced to runoffs.

Big fights in little races
Local school boards have in recent weeks become the focus of much attention, with part of the Republican political strategy involving tapping into resentment, or stirring up controversies, about LGBTQ books, abortion and the teaching of critical race theory. Republican candidates in larger races then use those controversies to pull in moderate voters.

Virginia's Republican gubernatorial contender, first-time candidate Glenn Youngkin, laser-focused on parents in the final weeks of his successful campaign. He was able to play on stories circulating in the more-Democratic northern parts of the state — such as alleged gay pornography books in public school libraries and alleged sexual assaults by a transgender student. He promised parents he would make sure they were part of the decision-making process for local school curricula.

The Democratic gubernatorial candidate, former governor Terry McAuliffe, was drawn into the alleged transgender assault report when, during a September debate, a moderator noted that McAuliffe had expressed agreement with the state's policies in support of transgender students and the right of local governments to make their own policies. McAuliffe tried to walk a careful line, saying he likes allowing local governments to have input but that "the state will always issue guidance as we do from the Department of Education."

Youngkin, who was widely praised for running a campaign that kept former President Donald Trump at a studied distance, also walked a narrow political line when asked about the transgender story. He said "we are called on to love everyone" and that not only should local districts make such decisions, but parents should be included in dialogue about such policies, including what books are included in libraries.

The bottom line of that controversy and similar ones, noted one commentator Wednesday morning on CNN, was that "it reminds voters that Democrats are too liberal."

McAuliffe has a strong record of supporting equal rights for LGBTQ people and released a "Bold Plan to Advance LGBTQ+ Rights." In his first term as governor, McAuliffe, in 2017, vetoed a bill seeking to give state-funded charities the right to refuse services to LGBTQ people.

Log Cabin issued a statement saying Youngkin "has demonstrated his desire to listen to and work with the LGBT community."

Like the Republican gubernatorial candidate in Virginia, Ciattarelli sought to stoke controversy over LGBTQ issues in public schools, saying "we're not teaching sodomy in sixth grade and we're going to roll back the LGBTQ curriculum."

While the results of the 10 school board races were mostly still unreported at deadline, in a small district in the middle of Ohio, candidate Dion Manley scored the first victory for a transgender candidate for office in the Buckeye State. "Dion shattered a lavender ceiling in Ohio," stated Victory Fund President Annise Parker. She stated Manley's victory was "especially significant given efforts by anti-trans activists across the nation to target trans students at school board meetings."

Liliana Bakhtiari became the first openly LGBTQ Muslim to win election in Georgia, succeeding in her second bid to serve on the Atlanta City Council. Although two other openly LGBTQ candidates lost their bids for the council, voters elected Alex Wan, a gay man, to return to a seat he previously held.

All six openly LGBTQ candidates for the New York City Council won, including Crystal Hudson and Kristin Richardson Jordan, the first two Black LGBTQ women to be elected to the 51-member body. Two of the six had uncontested general election races, but all six were first-time candidates for their seats.

In Minneapolis, Sheila Nezhad, a former policy analyst for the Williams Institute, an LGBTQ think tank at the UCLA School of Law, was still in the top two in her bid to become Minneapolis mayor. The city has ranked-choice voting and results were not yet complete at deadline.

In Buffalo, New York, India Walton, who identifies as queer, was not able to parlay her stunning primary win of the Democratic mayoral nomination into victory in the general election. Incumbent Democratic Mayor Byron Brown mounted an aggressive write-in campaign that overwhelmed Walton, a first-time candidate. Local news analysts suggested Walton was "the most progressive of the progressives."

In Atlanta, with a field of more than a dozen candidates for mayor, gay current City Council member Antonio Brown came in fifth, with only 2% of the vote. The Atlanta Journal Constitution noted that Brown had been saddled with an indictment, charging that he had engaged in bank fraud. He denies the charges but is scheduled for trial next year. Brown was the only openly LGBTQ mayoral candidate not to earn the Victory Fund's support in Tuesday's election.

And in Bozeman, Montana, Christopher Coburn won election to the City Commission, becoming the first openly LGBTQ black person to be elected in the state.