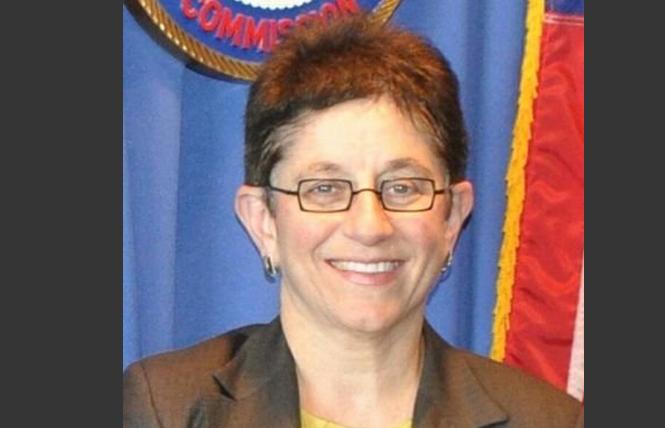 Gigi Sohn has been nominated to the Federal Communications Commission. Photo: Courtesy Twitter

On Tuesday, President Joe Biden announced that he intends to nominate Gigi Sohn to fill a vacant seat at the Federal Communications Commission. If Sohn is confirmed by the U.S. Senate, she would be the first openly LGBTQ FCC commissioner. She is well qualified for the post, and is one of the nation's leading public advocates for open, affordable, and democratic communications networks, according to a White House news release. For over 30 years, the release noted, Sohn has worked to defend and preserve the fundamental competition and innovation policies that have made broadband Internet access more ubiquitous, competitive, affordable, open, and protective of user privacy. In addition to Sohn, Biden nominated Jessica Rosenworcel as chair of the FCC. If confirmed, she would be the first woman to chair the panel. (She has been serving as acting chair and has been on the FCC since 2012.) These are both historic nominations and bode well for consumers and privacy advocates.

Sohn is no stranger to the FCC and that should be a benefit in her confirmation hearings. From 2013-2016, she served as counselor to former FCC Chairman Tom Wheeler, and from 2001-2013 was co-founder and CEO of Public Knowledge, a leading communications and technology policy advocacy organization serving the interests of consumers. She was previously a project specialist in the Ford Foundation's Media, Arts and Culture unit and executive director of the Media Access Project, a communications public interest law firm. Sohn holds a B.S. in broadcasting and film, summa cum laude, from the Boston University College of Communication and a J.D. from the University of Pennsylvania Law School. Currently, Sohn is a distinguished fellow at the Georgetown Law Institute for Technology Law & Policy and a Benton senior fellow and public advocate.

The FCC impacts all of us. It regulates interstate and international communications by radio, television, wire, satellite, and cable in all 50 states, the District of Columbia, and U.S. territories. An independent U.S. government agency overseen by Congress, the commission is the federal agency responsible for implementing and enforcing America's communications law and regulations.

According to NPR, Rosenworcel and Sohn are expected to push for returning to Obama-era net neutrality rules, which would prohibit internet providers from slowing internet speeds or blocking content. The agency also has the responsibility to set rules for everything from 5G technology to how much prisoners can be charged for phone calls. Rosenworcel has also worked to combat illegal robocalls, NPR noted in its article, though that is an ongoing issue, as anyone who has received unwanted calls to renew an expiring car warranty knows.

The LGBTQ Victory Institute, an arm of the LGBTQ Victory Fund, advocated for Sohn's nomination through its presidential appointments initiative. According to a news release, it organized more than 30 LGBTQ organizations to call for her nomination in a letter sent to the White House's presidential personnel office. Sohn is the latest high-level LGBTQ nominee in the Biden administration, which reports that 15% of its appointees identify as LGBTQ. Biden is adhering to his commitment to forming an administration that looks like America.

"Gigi is poised to make history as the first out LGBTQ commissioner at the FCC, but more important is that nobody is more qualified than her to tackle the breadth of issues the FCC faces in the near future," stated Ruben Gonzales, executive director of the institute. "Not too long ago, appointing an LGBTQ person to such a key position would be considered a political liability. Yet the Biden administration is building the most LGBTQ-inclusive administration ever and is proving they can do it while appointing the best possible people for each position."

Now it's up to the Senate to swiftly confirm Sohn and Rosenworcel. The five-member FCC is currently deadlocked with two Republican and two Democratic commissioners. Additionally, Rosenworcel's present term expires when the current session of Congress ends, as NPR reported. If the nominations are not acted upon, there may be a GOP majority. Democrats expressed frustration a month ago that Biden hadn't nominated anyone to the vacant seat. Now, there are only a few more weeks before Congress adjourns at the end of the year.

The Senate should quickly hold confirmation hearings for Sohn and Rosenworcel and Senate Majority Leader Chuck Schumer (D-New York) should set a vote. These nominations are too important to let slide. This is one more example of Biden working to undo policies put in place by his predecessor, and in this case, consumers will benefit from a Democratic-controlled FCC. Even those opposed to Biden should realize the importance of a fast internet and consumer protection policies.