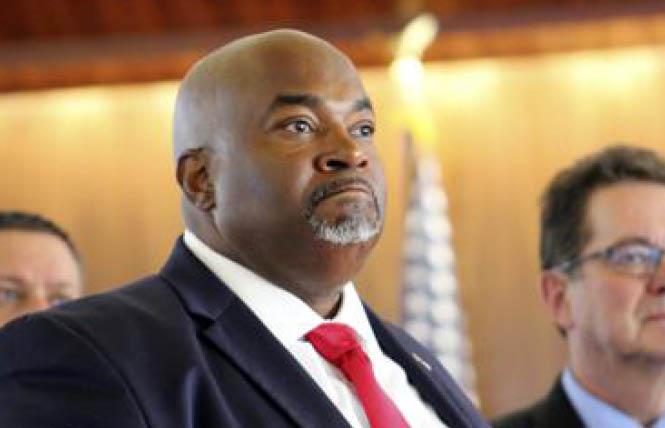 The lieutenant governor of North Carolina is doubling down on statements that led fellow officials and LGBTQ advocacy groups to call for his resignation.

On October 6, Right Wing Watch — an initiative of People for the American Way, the Washington, D.C.-based liberal advocacy nonprofit — posted a video to Twitter of Mark Robinson, who became the lieutenant governor of the Tar Heel State earlier this year, addressing the Asbury Baptist Church in Seagrove, a town of 285 in central North Carolina, over the summer.

North Carolina Lt. Gov. Mark Robinson says Christians must take control of public schools because children are being abused by being taught "filth": "There's no reason anybody anywhere in America should be telling any child about transgenderism, homosexuality, any of that filth." pic.twitter.com/aXjCPFKTs0— Right Wing Watch (@RightWingWatch) October 6, 2021

In the video, Robinson said that it is "child abuse" to force children to attend school when, if there, they'll be taught about "how to hate America," "why they're racist," or "transgenderism and homosexuality."

"I'm saying this now, and I've been saying this, and I don't care who watches it," Robinson said on the video. "There's no reason anybody, anywhere in America should be telling any child about transgenderism, homosexuality, any of that filth. And if you don't like me calling it filth, come see me, and I'll explain it to you."

Robinson said that this "abuse" will continue until "the people of God stand up" to stop it.

Robinson, the highest-ranking elected Republican in the state, faced immediate calls to resign.

Governor Roy Cooper (D), said it would be "appropriate" if Robinson left his position. (The two were not elected on a ticket.) Deputy White House press secretary Andrew Bates, speaking on behalf of President Joe Biden, stated "these words are repugnant and offensive. The role of a leader is to bring people together and stand up for the dignity and rights of everyone; not to spread hate and undermine their own office."

"We are calling on Lieutenant Governor Mark Robinson to resign for his disgraceful, hateful statements directed at LGBTQ+ people," Madison stated. "If Lt. Governor Robinson still doesn't understand how anti-LGBTQ+ rhetoric is received in North Carolina, he should ask former Governor Pat McCrory. This is not the first time Robinson has shared his discriminatory views, but it should be the last time he gets away with it as an elected leader.

"North Carolinians deserve better than these dehumanizing comments," Madison continued. "This incident only reaffirms the serious need for comprehensive non-discrimination protections that would outlaw discrimination and make North Carolina a safer place for LGBTQ+ people to live."

Kori Hennessey, the director of education and programs at the LGBT Center in Raleigh, told WTVD-TV that Robinson's remarks were "pretty hard to hear."

At a fundraising event for Republicans in North Carolina's Wilson County, Robinson doubled down on his statements, according to WNCT-TV.

"I believe that homosexuality is a sin," Robinson said. "That comes from my deeply held religious convictions. But I also believe adultery is a sin and fornication is a sin. I believe putting pornography in a kid's school is a sin. ... I am not going to sit silent while you put pornography in schools and present it to children."

"I believe that we need to send the ideas and the decisions of what our children are taught here in North Carolina, back to North Carolina and the parents," he added.

Robinson, the first Black lieutenant governor of North Carolina, was elected narrowly (51.6%-48.3%) over Democrat Yvonne Lewis Holley, who was then a member of the state's House of Representatives. His political career began after he went viral making a speech against gun control at a Greensboro City Council meeting in 2018, following the Marjory Stoneman Douglas High School shooting in Parkland, Florida that year.

After the June 2016 mass shooting at the LGBTQ Pulse nightclub in Orlando, Florida, Robinson stated that "Homosexuality is still an abominable sin and I will not join in 'celebrating gay pride.'"

Robinson was also accused of anti-Semitism after claiming that a cabal of "international bankers" such as the Rothschild family control the central banking system of each nation.

Robinson's office did not return a message seeking comment.