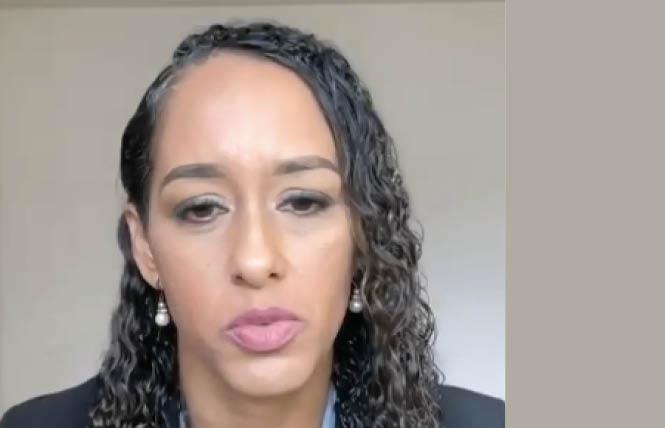 With the effort to recall District Attorney Chesa Boudin likely to go before San Francisco voters sometime next year, two assistant district attorneys who recently resigned from the DA's office announced that they are now working for his removal.

"My decision to resign was the result of a growing belief that Chesa Boudin lacks the desire and willingness to prosecute crime effectively in San Francisco," Brooke Jenkins, who resigned October 15, said in an October 25 virtual news conference. "He has proven his policies and his approach is anything but progressive. We have seen crime increase, justice wane, and lives being lost."

Boudin, who had been a reform-minded public defender, was narrowly elected DA in 2019, beating three more moderate candidates, including Suzy Loftus, who'd been appointed the city's top prosecutor by Mayor London Breed in the weeks before the election after the elected district attorney, George Gascón, abruptly resigned and moved to Los Angeles, where he is now that county's DA.

During the campaign, Boudin — whose parents were incarcerated when he was an infant; his mother was paroled and his father was granted clemency by former New York Governor Andrew Cuomo — drew heavy criticism from his rivals and forces such as the San Francisco Police Officers Association for some of his views on criminal justice reform, such as his opposition to gang-related sentencing enhancements.

But Safer SF Without Boudin — the group leading the recall effort and that held the news conference — insists that Boudin's problem isn't that he's a progressive prosecutor.

"Both [former SF DAs] Kamala Harris and George Gascón were progressive prosecutors because they created programs to prevent crime and to keep our youth out of the criminal justice system," said Don du Bain, the other former assistant district attorney who recently resigned. "Chesa Boudin does none of that. He simply declines to charge crimes. He releases criminal offenders prematurely and impetuously, and even releases those already convicted. So I chose to join the recall campaign. I urge you all to do so as well."

Safer SF Without Boudin's submission deadline was October 25, but campaign organizers submitted the petition's signatures October 22 — some 83,000, over 30,000 more than were required for ballot access. The city's elections department has 30 days to check the veracity and eligibility of the signatures before an election date is set; it likely could be combined with next June's primary ballot.

Safer SF Without Boudin, in contrast, is led by former San Francisco Democratic Party County Central Committee chair Mary Jung, who at the news conference attempted to distinguish her effort from Republican-led recalls such as that which targeted Governor Gavin Newsom last month.

"I have dedicated my life to Democratic [Party] values to improve and uplift our communities," Jung said. "San Francisco is my home and I deeply care about my community. Every San Franciscan should feel safe in our community, but with Chesa Boudin this is just not possible."

Boudin responded to a B.A.R. request for comment October 25 through Julie Edwards, a spokeswoman for the Friends of Chesa Boudin Opposing the Recall committee.

"Addressing public safety is District Attorney Boudin's top priority and the facts are clear: the overall crime rate is lower today than before DA Boudin took office and his prosecution rates are higher than his predecessor and comparable to other Bay Area DAs," Edwards stated. "Meanwhile he's put in place innovative solutions, like suing ghost gun manufacturers, to make San Francisco safer."

Overall crime was indeed down in 2020 and thus far in 2021, contrary to popular perception. However, gun-related violence, homicides, aggravated assaults, burglaries, auto break-ins and thefts are all up in 2021.

Boudin filed a lawsuit against the makers of so-called ghost guns, which was joined by California Attorney General Rob Bonta, earlier this year. The term "ghost gun" refers to unserialized guns that can be purchased online, often in disassembled forms.

Edwards' statement did not address specific allegations made against Boudin by Jenkins and du Bain, rather focusing on Republican opposition to Boudin in particular and progressive prosecution in general.

"This recall committee (funded and endorsed by the Republican Party and opposed by the Democratic Party) will do anything to hide these facts," Edwards continued. "The Republican Party-endorsed recall has already spent more than $1 million, using unethical and dishonest tactics, to force an unnecessary and wasteful recall on San Francisco. These same tactics have been deployed against progressive district attorneys in Los Angeles and Philadelphia and are just more political games from individuals who have shown they will mislead the public for political revenge."

ADAs give reasons for departing DA's office
Jenkins and du Bain painted a picture of an office without clear leadership.

Jenkins said two incidents in particular persuaded her to resign her position. The first was after her husband's 18-year-old cousin was killed in July 2020 in the Bayview neighborhood.

Jenkins claimed that there were two shooters among a possible four individuals who were involved in a gang.

"As a result, it's very difficult to prosecute under a simple murder charge," Jenkins explained. "What we know is that, therefore, the DA's office should have charged for gang conspiracy. ... Instead, Chesa and his staff declined to charge the case outright initially."

After Boudin was persuaded to file charges, the gang-related charges were "dismissed without explanation less than 30 days later," Jenkins claims.

"Chesa touted his position on not using gang charges or enhancements was to help the Black and Brown community in San Francisco," Jenkins said. "In reality, it has had the opposite effect. ... Blacks and Latinos in San Francisco deserve the same protection as everyone else."

Jenkins said that the second incident occurred when a deputy public defender asked Boudin to override a deal Jenkins had made with them.

"He allows public defenders — his former colleagues — to contact him, their former colleague, directly, to get the result they'd like for their client," Jenkins said. "He is nothing like most of the progressive DAs you see in California, including the one who hired me, George Gascón."

Du Bain also claimed to have had two inflection points.

The first was the hit-and-run case that touched off the Greenberg-led recall effort, when Troy Ramon McAlister, 45, allegedly struck and killed Elizabeth Platt, 60, and Hanako Abe, 27, while they entered a crosswalk at Mission and Second streets, while he was driving under the influence in a stolen vehicle.

"I ask Chesa Boudin: what is so progressive or reform-minded about releasing someone with eight prior felony convictions into the streets so he can be in the position to take the lives of two residents?" du Bain rhetorically asked.

The second incident occurred when du Bain alleges he was told via an intermediary that Boudin wanted a lesser sentence for a man who, on his fourth domestic violence conviction, was found guilty of non-fatally shooting his girlfriend in the stomach.

"As a result of this decision by Chesa Boudin, rather than follow that directive, I chose to withdraw from the trial," du Bain said. "Never in my career of 136 jury trials have I ever withdrawn."

Du Bain and Jenkins said many of their former colleagues feel the same way. About one-third of the office has left since Boudin was sworn in last year, the San Francisco Chronicle reported.

"Over 40 assistant DAs have left the office voluntarily since Chesa took over," Jenkins said. "While I can't speak for each and every one of them, it is clear there is commonality in our reasoning. They felt they could not continue to prosecute crime in light of Chesa's radical approach. Between that and concerns about the high turnover from a number of [assistant] DA's, and cases that may have discovery issues because they are changing over so frequently, a large number of people who've left have left because of concerns about how cases are being managed."

Du Bain and Jenkins both had concerns that crime victims are not being included in prosecutorial decisions.

The B.A.R. inquired of both du Bain and Jenkins' current employment status.

Du Bain said he is not planning on obtaining new employment, devoting his efforts instead to the recall effort. Jenkins said she will be working for "several nonprofits" but did not say which ones.

The POA did not respond to a request for comment.

SF school board recall
Boudin isn't the only city official who may get booted from office. On February 15, San Francisco voters will decide whether San Francisco Unified School District board President Gabriela López, Vice President Faauuga Moliga, and Commissioner Alison Collins should keep their jobs.

Also on the same ballot will be the special election for the city's assessor-recorder.