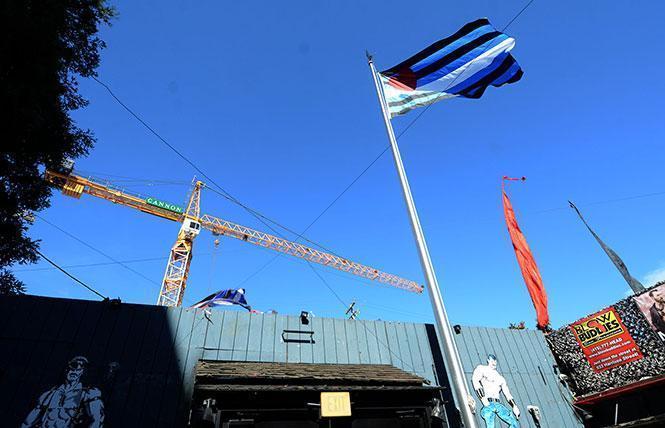 San Francisco's gay-owned Eagle bar is one step closer to being the second leather bar in the U.S. of the same name to become a local landmark. The city's Board of Supervisors granted preliminary approval for doing so at its meeting Tuesday, its first during LGBTQ History Month.

Because it is an ordinance, the supervisors will need to vote a second time at the board's October 19 meeting to make the city's first landmark related to leather history official. It will also be the city's third gay bar location to be landmarked and the eighth property in San Francisco with ties to LGBTQ history to be designated a city landmark.

Atlanta officials christened their Eagle bar, which opened in 1987, a city landmark in December 2020. San Francisco's Eagle bar, under different ownership than that of its East Coast counterpart, first opened in February 1981 at 396-398 12th Street at Harrison in the South of Market neighborhood.

The area had earned the nickname of the "Miracle Mile" due to the numerous businesses catering to the LGBTQ community on Folsom and Harrison streets in the 1970s and 1980s. While that part of western SOMA is now part of the Leather and LGBTQ Cultural District, the Eagle is one of the few leather bars remaining.

It was shuttered for two years between April 2011 and March 2013 when Lex Montiel and his late business partner Mike Leon took over the ownership and management of the bar. Montiel has voiced his support for landmarking the Eagle, which is best known for its Sunday beer bust fundraisers on its outdoor patio.

District 6 Supervisor Matt Haney, who represents the area, instigated the landmark process for the bar last year shortly after the roughly 5,153 square foot, irregularly-shaped rectangular lot where it is situated was put up for sale. The property, listed at just shy of $3 million, has yet to sell.

Noting that the Eagle "is a cornerstone of the Leather and LGBTQ Cultural District, an important historical asset, a cultural institution, and a community anchor that deserves all of the protections and privileges that the city can provide," Haney said Tuesday that "it is imperative that we acknowledge this significance, and that we endeavor to prevent this rich history and essential part of SOMA from being erased due to the de-stabilizing pressures of ongoing gentrification and development."

SF employment SOGI data vote delayed
The supervisors had also been expected to give preliminary approval Tuesday for tracking how many LGBTQ people are employed by, and are applying for, city and county jobs. But the item was sent back to the board's Rules Committee in order to clarify how the sexual orientation and gender identity data would be collected.

As the Bay Area Reporter first reported in June, city leaders want to strike a restriction in the city's municipal code that forbids it from inquiring into the "sexual orientation, practices, or habits" of city employees. Known as Chapter 12E, the City Employee's Sexual Privacy Ordinance of the Administrative Code, it was enacted in 1985 during the height of the AIDS epidemic as a way to protect LGBTQ applicants and city employees from being discriminated against.

With those fears no longer a concern, and SOGI data routinely asked of people seeking various city services and in public health settings, Mayor London Breed and gay District 8 Supervisor Rafael Mandelman introduced legislation during Pride Month that would repeal that section of the Administrative Code. Once passed, it will be up to the city's Department of Human Resources to implement it.

The Rules Committee, on which Mandelman serves, had approved doing so at its September 27 meeting. But an issue was flagged ahead of the full board's voting on it October 5.

The SOGI data will not be collected anonymously, as Breed and Mandelman had said it would be in announcing the change to the code. It will be collected confidentially in a way that protects the privacy of respondents.

"The city attorney and DHR wanted to make sure we are very, very clear about what the expectations are given the privacy concerns," Victor Ruiz-Cornejo, a gay man who advises Breed on LGBTQ policies, explained to the B.A.R. in a phone interview ahead of Tuesday's board meeting. "As written, it says anonymously. It is not kept anonymously; it is kept confidentially."

The Rules Committee is now expected to pass the revised ordinance language when it next meets Monday, October 18. The full board could take up the matter at its meeting the next day or on Tuesday, October 26. Because it is an ordinance, the board must twice vote to approve the code change for it to become official.

SF arts commission approves new Milk plaza design
The full San Francisco Arts Commission has given its support to the latest redesign plan for the public parklet named after gay slain supervisor Harvey Milk in the city's LGBTQ Castro district. It did so unanimously without comment at its October 4 meeting.

The commission's Civic Design Review Committee had unanimously voted September 20 to back the current modifications for the project. The committee members praised the new design for Harvey Milk Plaza as a "breath of fresh air" and an "astounding" change from previous proposals they had voted on, as the B.A.R. reported last month.

The Friends of Harvey Milk Plaza is aiming to reimagine the entrance area into the Castro Muni Station to make it more user-friendly and better honor Milk, the first out LGBTQ person elected to public office in San Francisco and California. He was killed November 27, 1978 inside City Hall 11 months into his first term along with then-mayor George Moscone by disgruntled former supervisor Dan White.

City officials named the plaza in honor of Milk, a vocal public transit advocate during his lifetime, in 1985. But the windswept area has long drawn complaints that it doesn't provide much usable space for the public to enjoy.

For several years the friends group has been seeking city approval to transform the area. The latest plan calls for a smaller stairway leading to the underground subway station with a rose-colored, transparent overhang above the escalator that goes to the Muni station to protect it from rainwater.

A new spiral podium feature would be built at the entrance of the plaza at the intersection of Castro and Market streets. Quotes of Milk's would be embedded throughout the plaza.

A memorial grove with 11 trees, of different kinds, symbolizing Milk's time in office would stand at the plaza's entrance from Collingwood Street. In the same area would be a "hope grove," symbolizing the candlelight vigil that took mourners from the Castro to City Hall the evening that Milk and Moscone were assassinated.

The construction costs for the project have yet to be finalized, with earlier estimates saying it would be at least $10 million. Although it has broad support among Castro civic groups, the project also has its detractors who say improving the memorial aspects can be achieved by less intrusive cosmetic changes done for less cost.

The design still needs additional approvals from various city oversight panels and transit agencies. The friends group also has yet to secure funding to pay for the construction.


Web Extra: For more queer political news, be sure to check http://www.ebar.com Monday mornings for Political Notes, the notebook's online companion. This week's column reported on the historic candidacy of a lesbian gubernatorial candidate in Oregon.