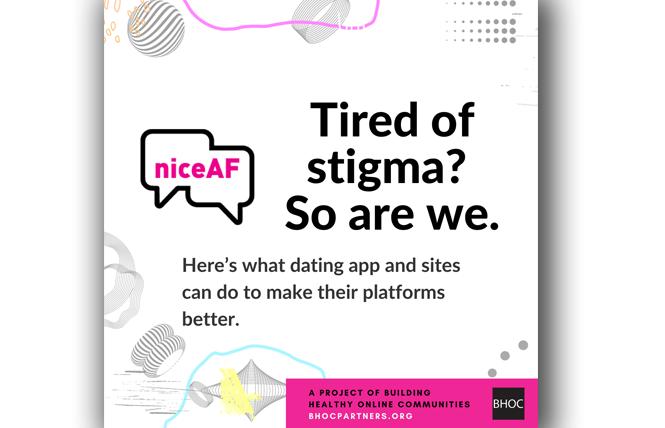 The NiceAF campaign — which encourages people to be nicer to one another on GBTQ dating apps — has released in a report the results of a survey about what app users want to see to facilitate kinder and better communication.

"The No. 1 recommendation from app users was that they want unlimited blocks and we don't want to have to pay for it," Jen Hecht, a queer woman who is the co-founder of Building Healthy Online Communities, told the Bay Area Reporter last week.

As the B.A.R. reported last year, popular dating and pickup platforms such as Grindr, SCRUFF, and Jack'd joined together with BHOC to create the NiceAF campaign. The campaign launched with a video competition that ended July 2, 2020 asking folks to share their personal experiences with stigmas (such as racial, HIV status, or body shaming) and belligerent behavior on the apps.

Subsequently, Hecht said, the campaign conducted a survey from April-June 2021 that ultimately included 5,500 responses from app and site users.

"While gay, bi, and trans people have long been subjected to discrimination, stigma, and hate speech from outside our communities, the way we treat each other online can also cause harm," the report's executive summary states. "Queer dating app and site users can harm others because of their race, gender identity, age, body size, disability, or because they're living with HIV."

App users' negative language has derogatory impacts on others, the summary states.

As a matter of fact, studies have shown that in-group discrimination in queer communities is more detrimental to an individual's mental health than discrimination from non-LGBTQs.

Preferential phrases such as "No fats," "No femmes," and "Clean only" [no HIV] and "their derogatory implications are all too prevalent," the executive summary states. "Yale University researchers John Pachankis, Ph.D. and Charles Burton, Ph.D., found that for some gay and bi men, being repeatedly rejected by other gay and bi men online is associated with greater risk for HIV and symptoms of depression and anxiety."

Said Hecht: "We know queer people face discrimination externally, but when negativity happens within the community that can have a negative impact on mental health and well-being ... more harmful than the external negative experience."

Dan Wohlfeiler is a gay man who has been working in HIV and STD prevention since 1987. He co-founded BHOC with Hecht.

"This is the first time anyone has brought all the apps together on things that have a big impact on the mental health of their users," Wohlfeiler told the B.A.R.

Wohlfeiler said that many people internalize negative experiences that could be mitigated by changes in the design of the apps.

"I was struck by the number of guys who put all the responsibility on the user," Wohlfeiler said. "'Just grow a pair,' 'don't be a pussy.'"

While toxicity in queer online spaces is "not a new phenomenon," Wohlfeiler said, "it's not that hard to work with the apps to provide them with tools that with very little effort can make the experience easier for everyone."

Recommendations
The 36-page report gives recommendations for the apps going forward based on the survey respondents' opinions.

These include unlimited blocks, more options for customizing individual profiles, expanding filtering functionality, allowing people to use pre-written phrases for different situations, and prioritizing the needs of users who experience stigma in future development and implementation.

Wohlfeiler said that, in development, apps especially need to "prioritize people of color and trans people," who often bear the brunt of discrimination in app settings. As one trans respondent stated in the survey, "Many of us who are trans see slurs in people's profiles. Many of us are in vulnerable positions. People will attack you. We should have protection."

"The apps can structurally never be 100% neutral," Hecht said. "There are ways the apps can change."

For example, pre-written phrases can "make it easier for someone to reply in a positive way [to someone] they're not interested in."

Unlimited blocks could also be helpful at preventing harassment. As one survey respondent put it, it isn't right to make people "pay more money to put up with less abuse."

Some apps, such as Grindr, put an end to users' ability to filter by race/ethnicity last year amid the national upheaval following the police murder of George Floyd in Minneapolis, Minnesota.

However, such moves have proved to be unpopular.

"A significant percentage of people of nearly all races wanted to filter others by race or ethnicity," the report states. "Many POC users voiced their disappointment that filtering by race was removed by some apps and wanted the option to only see users of specific races or ethnicities. As one focus group participant noted, 'When I'm searching for someone, I want to talk with people who know my culture. Where I live, there are no Asians. I'm looking for people who are interested in my culture. It's not always about sex.'"

Among Black respondents to the survey, a majority (55%) wanted to be able to filter others by race and ethnicity.

"In our focus groups, some Black participants wanted to only meet other Black people to avoid racism, particularly being fetishized or rejected based on their race," the report states.
Not everyone felt that way, though, with a plurality of Latinx users saying they didn't want to be filtered by race/ethnicity. White users were split 35%-35% on the matter.

"Some brought up how filtering by race created uncomfortable dynamics," the report states. "One focus group participant summarized it by saying, 'I don't want to be found by my race. I don't want to educate anyone on the Black experience.' Other POC users objected to being 'filtered out of the grid,' believing it encouraged sexual racism and discrimination. However, a few POC users in our focus groups expressed not minding being 'filtered out' by white users; for them, filtering out people based on their race or ethnicity was a red flag indicating racist attitudes which could lead to mistreatment."

Hecht called it a "complex and nuanced issue" with "no one clear directive everyone agrees on."

Hecht also said that "we will be working with [the apps] in the future about how to implement" the recommendations. Grindr stated it is considering the results of the report in making future changes to the app.

"This is an issue we take seriously," Alice Hunsberger, the senior director of Grindr's customer experience, stated. "We are already looking at ways to implement the ideas that BHOC was able to solicit from users."

SCRUFF and Jack'd did not respond to requests for comment.