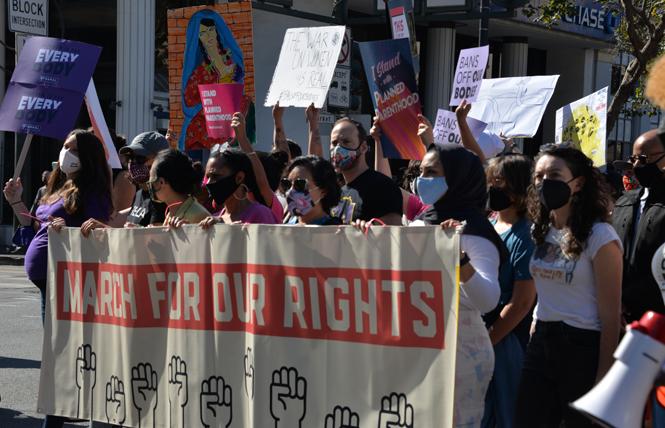 San Francisco District Attorney Chesa Boudin, center, shown here at the October 2 women's march, and his office are working with a nonprofit organization to establish a truth and reconciliation commission. Photo: Bill Wilson

More than a year after San Francisco District Attorney Chesa Boudin announced the creation of a truth, justice and reconciliation commission amid 2020's nationwide protests stemming from the police murder of George Floyd, an Oakland nonprofit is putting the panel together.

Though final plans won't be finalized for several weeks, "people are focusing on sharing the truths about systemic disinvestment and the Black disappearance we've seen in San Francisco since 1970," according to attorney Fania Davis, who is involved with the project and is the sister of out professor and activist Angela Davis.

As the Bay Area Reporter reported July 1, 2020, Boudin joined the top prosecutors in Philadelphia and Boston, along with two civil rights advocates, to announce the formation of truth, justice, and reconciliation commissions, or TJRCs, in each of the cities — during the nationwide protests following the police murder of Floyd in Minneapolis, Minnesota — to review and officially acknowledge long-standing systemic racial inequities in the criminal justice system.

But one would be mistaken in thinking that just because Boudin announced the commission that means it'll be run out of his office. Instead, the W. Haywood Burns Institute, a local nonprofit, will head up the efforts. Boudin's office did facilitate $150,000 in private funding to be paid by one nonprofit to another for the commission, which his chief of staff, David Campos, a gay man, said is a "public-private initiative."

The money came from the San Francisco-based Grassroots Law Project and went to the Burns institute. James Bell, an attorney who focused on representing incarcerated youth for over 20 years, founded it in 2001.

Bell told the B.A.R. that in a September 17 meeting, the institute's design team would be deciding what the commission will be focusing on.

After that meeting, Bell referred the B.A.R. to Davis, who said that due to "emergencies" the design team didn't make a final decision that day.

"The stars just weren't aligned," Davis said, adding that one member of the design team had a death in the family and that the team didn't want to make final decisions without their input.

Davis said that the general sense of the design team is that they want to set up spaces where individuals affected by the displacement of San Francisco's Black community can share their stories and demand accountability, either in public testimony or one-on-one interviews.

Davis also said that the team wants to set up spaces for landlords and developers to account for their actions.

"We want responsible parties to take responsibility for the harm they've caused," Davis said. "We want healing spaces and to promote respect and dialogue."

Davis said that the commission will also look at police killings, which she said is the main focus of the other cities' commissions.

The exact state of the East Coast commissions is unclear, however. The Philadelphia District Attorney's office has not responded to multiple emails and phone calls from the B.A.R.

When asked via email if the commission had been formed, had met, and if not, why, Brelis stated: "The office under DA Rachael Rollins has always had a restorative justice approach in how we handle things.

President Joe Biden has chosen Rollins to serve as the next U.S. attorney for Massachusetts, according to a story on WBUR. If confirmed by the Senate, Rollins would become the first Black woman to serve as the top federal law enforcement official in the state. The station reported that the Senate Judiciary Committee subsequently deadlocked in an 11-11 vote along party lines on Rollins' nomination, forcing Democrats to bring the vote to the full Senate.

SF commission
Bell said it's up to the design committee to decide the form the San Francisco commission will take.

"They'll be making two decisions: first, what the conversation should be, and second, what is the vehicle to get input from people," Bell had said in an earlier interview. "A committee with testimony? Several committees? South Africa-style or Canada-style? So we're going to decide that, have one more meeting and go live."

While the San Francisco commission's meetings will be open to the general public, the design team's meetings are not.

"It [the commission] is not an entity while we're still during the planning process," Bell said. "The planning goes better when we can deliberate."

Davis said hopefully the final topic will be made official at the October meeting, which Bell said will go over logistical issues, such as whether commission work should be on Zoom, or in-person, or a combination of the two.

The DA's office reported the $150,000 that went from the Grassroots Law Project to the Burns institute as a behest payment "in an abundance of caution," according to Arcelia Hurtado, a bisexual woman who is the managing attorney in charge of diversity, equity, and inclusion at the DA's office. A behest payment is one made with the cooperation or solicitation of a public official — in this case, Boudin.

Hurtado also told the B.A.R. that she is involved in the TJRC project "as a representative of the DA."

The B.A.R. reached Boudin directly August 31. When asked why he announced the commission if it is going to be a nonprofit enterprise, he twice said he did not understand the question before saying he had to hang up, citing the impending birth of his child.

The B.A.R. followed up by speaking with Campos, who said that it was always the intention that this commission would be spearheaded by a third party.

The Burns institute is a nonprofit organization "working to transform the notion of what justice means in a country with the history that we share ... through challenging racial hierarchy and the social control of communities of color by the justice sector and other public systems," according to its website.

Bell had told the B.A.R. in August that the form the commission would take would be decided by the beginning of September.

"We pulled together a group of folks — representatives of the community — to decide how we want to go forward," Bell said. "Will it be a commission that hears testimony? Several panels people can listen to? So, we haven't decided on the vehicle."

Bell said that the DA's office reached out to him and Davis.

"The district attorney's office was the entity that was reached out to by the funding source and the office was like 'we're not the most appropriate to do this,' so they reached out to Davis and to Burns, to us," Bell said. "Chesa was like 'we are interested in this but we aren't the folks to do this.' When Chesa got this he said it should be done by somebody else."

Bell said that the planning meetings are not covered by the Brown Act because "we are not an official city body in any way," but that commission meetings will be public. Once the format of the commission is determined, members will be selected, Bell said.

Bell did not know the projected end-date of the commission.

Graduate paper published
Public records from the DA's office requested by local gay activist Michael Petrelis stated in a July 9 email that a group of graduate students at Berkeley Law's international human rights clinic "provided research assistance on the formation of [truth, justice and reconciliation commissions] generally, both domestically and internationally. The clinic's students are in the process of finalizing a 200-page white paper based on their research which will be published this fall and will serve to guide the work of the TJRC's design team, as well as the formation of other TJRCs across the country."

(Petrelis said he only received answers from the DA's office after showing up with a bullhorn to an event where Boudin was speaking in person.)

This email describes Hurtado as the liaison to the students, and Bell referred the B.A.R. to Hurtado for questions about the graduate students' work.

From Bell's understanding a month later, this paper relates to "the history of the Black community with law enforcement."

"I don't know that the focus is going to be police misconduct and Black people," Bell said.

Hurtado confirmed in August that the paper "relates to the Black community and the police in S.F."

Finally, on October 4, the San Francisco DA office's Twitter account announced the publication of the paper, titled "Forming a San Francisco Truth Commission" — 15 months after that initial press announcement about the formation of the commission.

SF DA's truth commission pushed back, yet again
Sign up!