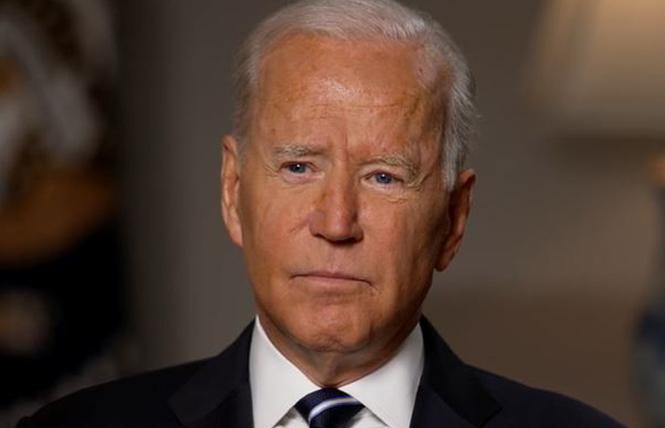 President Joe Biden and his administration need to step up efforts to help queer Afghans resettle in the U.S. or allied countries. Photo: Courtesy ABC News

President Joe Biden defended his decision to pull troops out of Afghanistan last month, but lost in the ensuing debate has been the fate of LGBTQ Afghans now living under the homophobic Taliban regime. As LGBTQ outlets, including the Bay Area Reporter, have reported, the latest development is that a coalition of six global LGBTQ organizations have called on the Biden administration to protect and resettle vulnerable groups, including queer Afghans.

The Council for Global Equality; Human Rights Campaign; Immigration Equality; International Refugee Assistance Project; Organization for Refuge, Asylum, and Migration; and the Rainbow Railroad sent a letter to Biden earlier this month. In it, they pointedly stated that as the withdrawal from Afghanistan will be part of the president's legacy, so will the actions the administration takes to ensure the well-being of vulnerable populations such as LGBTQ Afghans. The coalition of LGBTQ organizations correctly stated that although same-sex activity was criminalized before the Taliban re-took control, the new regime's "mandate to rule with Sharia law makes the fate of LGBTQI Afghans even more precarious."

"There are already alarming reports from LGBTQI Afghans about their fear of living under Taliban rule, with many saying that they have gone into hiding in fear for their lives," the organizations wrote. In July, Taliban Judge Gul Rahim told German magazine Bild that there were only two punishments for homosexuals under Sharia Law: execution by stoning or a wall falling on them. Reports of LGBTQ Afghans being executed by Taliban soldiers had been making headlines around the world before the U.S. completely withdrew from the country.

The coalition is "deeply disappointed" that the administration did not press to extend the August 31 deadline to evacuate more at-risk refugees from Kabul, but it noted that Biden has pledged to continue to support refugee evacuation and resettlement. Unfortunately, in the weeks since the September 9 letter, the administration has said little publicly about what it will do.

The coalition's call to action comes after 64 members of Congress called upon Secretary of State Antony Blinken to protect LGBTQ Afghans. In a September 13 statement, Blinken announced the U.S. is providing nearly $64 million in new humanitarian assistance.
The 10-point plan issued by the coalition is straightforward. One of the most important is that the administration "provide and effectively implement 'Priority 2' (P-2) access to the U.S. refugee program for the highly vulnerable population of LGBTQI individuals fleeing Afghanistan" and to waive the application fee for any queer Afghan applying to relocate to the U.S. on an expedited basis via humanitarian parole."

It also calls for a new program of temporary protected status for Afghans in the U.S., including those paroled into the country on an emergency basis. These requests are critical because the Taliban regime is quickly reverting to its old ways. Women, especially, are bearing the brunt of the Taliban's renewed crackdowns on education. As the Associated Press reported September 28, "Women are already feeling restrictions. Female employees in the Kabul city government have mostly been told to stay home, and high school girls have not been allowed back to class." The New York Times reported that Kabul University's new Taliban chancellor has barred women as instructors or students, which, of course, is reminiscent of Taliban rule in the 1990s.

Make no mistake that the situation is dire for queer Afghans, for whom hiding their identity is necessary for survival. Nemat Sadat, who became the first Afghan to publicly come out as gay and ex-Muslim in 2013, has been helping queer Afghans.

"Afghanistan's LGBTQIA community has been fighting on the frontlines in the global war on radical Islam. For the past two decades, LGBTQ+ Afghans have risked it all to legitimize the democratic experiment and usher social progress in Afghanistan, even though they were themselves criminalized under the law and benefited the least from the billions in aid that flowed into the country," he wrote in a recent statement to the B.A.R. "When Kabul fell and the Taliban took over, the incremental gains that LGBTQ+ Afghans had made reversed overnight and now they also face an imminent threat of extermination under Sharia law."

U.S. officials must heed the 10-point plan and help queer Afghans get to the U.S., even if it means temporarily staying in a third country, which is also one of the recommendations. Other countries are stepping up. The Times reported this week that Canada, which previously stated it will include LGBTQs in its resettlement plans, will double its Afghan resettlement program target to 40,000 people.

The Biden administration does not seem to have a plan to assist queer Afghan refugees and asylees trying to leave the country. U.S. leaders should have had programs in place; it was no secret that the Taliban were working to retake the country, which it did in short order and forced the Afghan government to collapse. The administration should be working with our allies and non-governmental organizations that have been reliable in identifying and recommending LGBTQI Afghans to the State Department for protection, as the coalition's plan states.

Locally, Bay Area cities have stepped up. Groups such as Oakland-based Refugee and Immigrant Transitions and Jewish Family and Community Services East Bay are helping welcome Afghan refugees, although it is not known how many identify as LGBTQ. The San Francisco Board of Supervisors passed a resolution September 28 to support Afghan refugees. Policymakers in Washington, D.C. and elsewhere must keep in mind that LGBTQs living in Afghanistan are in an untenable situation. They can't live as their authentic selves, and risk imprisonment or even death at the hands of the Taliban. The U.S. must step up its efforts to aid those most vulnerable of persecution because LGBTQ rights are human rights.

Editorial: An expensive lesson for VA school board
Sign up!