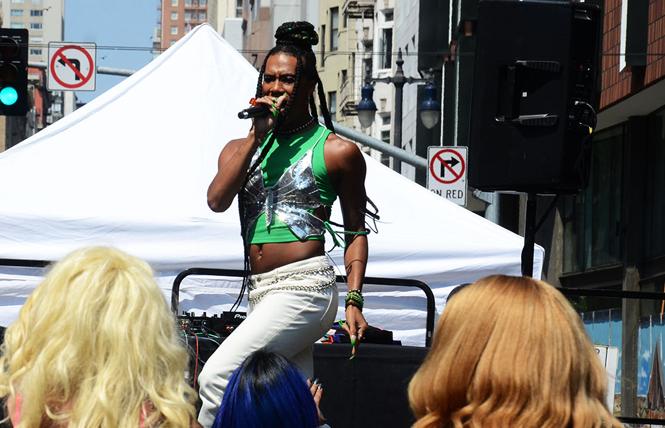 Saturn Rising was part of the stage entertainment during The Riot Party in San Francisco's Transgender District August 29. The district was one of 17 organizations that received COVID-related grant funds from Horizons Foundation. Photo: Rick Gerharter

Horizons Foundation has announced 18 Bay Area LGBTQ nonprofits were recipients of a total $250,000 in grants from the foundation's LGBTQ Resilience and Recovery Fund. These grants will fund direct services for the most underserved in the Bay Area LGBTQ community, who continue to face significant challenges in meeting basic needs during the COVID-19 pandemic, a September 20 news release stated.

"These organizations act as nothing less than a lifeline for many of the most underserved in our community," stated Francisco O. Buchting, Horizons' vice president of grants, programs, and communications. "The LGBTQ community is as resilient as ever, but the need remains vast — and targeted support is what's needed most."

Aria Sa'id, president and chief strategist of the Transgender District, wrote in an email that it will address food insecurity issues.

"We just did an amazing partnership with the Okra Project and DoorDash to address food insecurity in Black transgender communities, and provided gift cards to Black trans women across the country," Sa'id wrote. "We're hoping to replicate that partnership to fit more local needs of trans community in terms of housing and food."

Openhouse, the LGBTQ senior agency in San Francisco, and Lavender Seniors of the East Bay each received $15,000.

The LGBTQ Resilience and Recovery Fund is only Horizons' latest effort in its response to the pandemic; last year, the foundation awarded over $1 million in emergency grants to Bay Area LGBTQ nonprofits, the release stated.

People can make a donation of any amount to attend. For more information, click here.

Horizons is the world's first LGBTQ community foundation, according to the release. It invests in queer organizations, strengthens a culture of LGBTQ giving, and builds a permanent endowment for the future. For more information, click here.

LGBTQ community conversation on America's 250th birthday
America250, the nationwide commemoration of the country's 250th anniversary in 2026 led by the U.S. Semiquincentennial Commission, will hold its next community conversation Thursday, September 23, at 1 p.m. Pacific Time. This meeting is for members of the LGBTQ community, who are invited to share their hopes for the celebration. According to a news release, the forum is designed to provide all communities the opportunity to speak about and shape America250 activities.

"Actively engaging and having open, honest conversations with the many diverse communities that make up our country is tremendously important," stated Megan Springate, Ph.D., director of engagement at America250 Foundation. "We look forward to working together to ensure America250 is the most inclusive commemoration in history and represents the unique experiences, viewpoints, and hopes of the LGBTQ+ community."