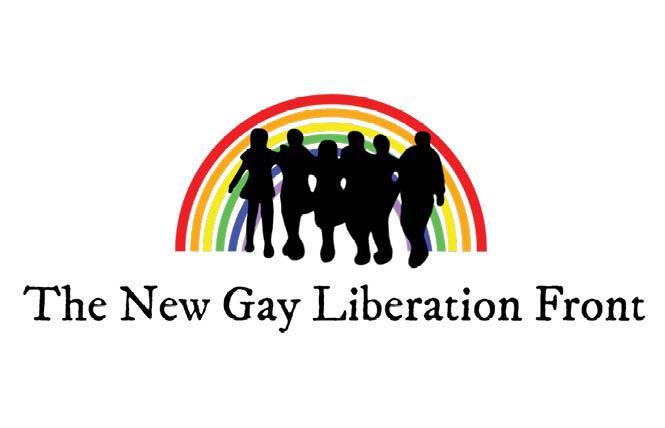 The New Gay Liberation Front group held a launch event September 19 and is being criticized for its stance on trans rights. Photo: Courtesy NGLF

A new national group taking the name of a Stonewall-era gay liberation organization is not the same as that historic organization and is raising eyebrows for its positions on transgender rights.

The New Gay Liberation Front had an online launch event Sunday, September 19. It is named after the original Gay Liberation Front, which was founded in the aftermath of the 1969 Stonewall riots in Manhattan, which kicked off the modern movement for LGBTQ civil rights.

A news release states that the purpose of the New GLF is to "bring awareness of the harms lesbians and gay men face from modern day issues like gay conversion therapy, increased hate crimes in the USA, and a new wave of homophobia that has emerged, thinly veiled by inclusivity and disguised as a 'human rights movement.'"

"Homosexual people's dignity and autonomy are under direct attack by gender identity ideology, radical trans activists, and major institutions — and the NEW GAY LIBERATION FRONT is here to fight back," the release states.

The Bay Area Reporter spoke with two founding members of the group ahead of the launch event: John Worth, a gay man, and Belissa Cohen, who identifies as same-sex attracted.

When asked how they plan to bring awareness to conversion therapy and hate crimes, Cohen claimed that much of the modern LGBTQ rights movement is now homophobic. Conversion therapy is the widely debunked practice of attempting to change a person's sexual orientation, gender identity, or gender expression. California bans the practice on minors, as do many other jurisdictions.

"The new homophobia we're saying is about the erasure of single-sex spaces that lesbian and gay men need to find partners, and the medicalization of gay youth," Cohen said. "We're just getting started. Our goals are to defend homosexuality, defend biological sex, and defend single-sex spaces."

Cohen referred to trans men as women and trans women as men. When asked, Cohen said the group doesn't use the term "transgender." It also doesn't use cisgender to describe people who identify with their birth sex.

"Cis is a slur meant to insult people," Cohen said. "Women are women and men are men. It's objectifying people who are just normal."

When asked what's wrong with referring to people by the terms they identify themselves with, Cohen said that "it is only their self-perception."

When asked to name specific LGBTQ rights organizations that are being homophobic, Cohen said, "I think all of them."

"I can't think of a single LGBT organization or formerly lesbian rights organization looking out for the interests of lesbian and gay men," she said. "We used to have lesbian bars, gay male bars, and now they're all 'queer.'"

LGBTQ orgs push back
Mark Segal, a gay man who was a founder of the original GLF and is now the owner and publisher of the Philadelphia Gay News, was critical of the new group when asked about it.

"Defend homosexuality ... what are we in 1950?" Segal wrote in an email. "Anyone who describes themselves as a homosexual ... something wrong! We in the real GLF fought against that word and the identity society gave to it."

Segal wrote that he doesn't "think they did their homework on who we were and what we stood for."

"We were the first organization that allowed each person to self-identify, not pit one identity against another," Segal wrote. "Are they the identity police?"

Jupiter Peraza, a trans woman who is the director of social justice and empowerment initiatives at San Francisco's Transgender District, told the B.A.R. when a reporter called that she was currently right across from the Stonewall Inn in New York City.

"It's quite surreal," Peraza said. "I'm in Christopher Park, right across from the Stonewall, visiting a new Marsha P. Johnson bust placed here. ... It's full circle. Having an organization like that is incredibly historically inaccurate. The original gay liberation movement took the work and advocacy of trans people, of trans people of color, and that's how the modern LGBTQ movement came about. So to have an organization like that called the New Gay Liberation Front is incredibly tone deaf, historically inaccurate, and divisive."

(Johnson, who died in 1992 at the age of 46, was among the prominent participants in the Stonewall riots who went on to become a beloved vocal advocate for gay and transgender issues up until her death.)

Peraza said that the new group is "so sad."

"It does not give you hope or offer inspiration," Peraza said.

Gwendolyn Ann Smith, a trans woman who is the B.A.R.'s Transmissions columnist and the founder of the Transgender Day of Remembrance, stated that that the group "given a chance will set LGBTQ rights back for decades."

"This group, from their deliberately misleading acronym to its sole focus on anti-trans ideology, tells the LGBTQ community exactly what this group is setting out to do: divide our community in a time of great need for us all," Smith wrote.

Ethan Rice, a senior attorney with the fair courts project at the Lambda Legal Defense and Education Fund, stated that it'd be wrong to pit parts of the LGBTQ community against each other.

"It is important for people to understand that this is not a zero-sum game," Rice wrote. "There is not less justice available for LGB people when we win a case on behalf of a transgender person. In fact, usually it means more justice for everyone. Right now, transgender people, particularly youth, are under intense attack from state governments around the country. It is very sad that the attacks are coming from inside the community as well."

Rice said that historically homophobic attacks are now being weaponized against trans people.

"Some of the very same attacks that were leveled at gay men and lesbians (i.e., that they shouldn't be in the same restroom as straight people) are what transgender people are facing in this moment," Rice wrote. "There is zero evidence of any kind that sex-separated spaces are less safe when transgender people are able to access the facilities that match who they are. Zero. Just like there was no evidence that gay men and lesbians made restrooms less safe for straight people."

Rice wrote that some of the group's ideas are "rather baffling."

"Every day we are working to ensure the equality of people in same-sex relationships," Rice wrote. "We are also working on behalf of people who are gender-nonconforming whether they are transgender or cisgender. And certainly, many transgender people also identify as lesbian, gay, bisexual, or queer. I hope everyone in the LGBT community can understand that the more freedom and protection from discrimination we win the better for all of us."

The Los Angeles LGBT Center, which the New GLF members criticized by name in an interview, did not respond to multiple requests for comment.

New GLF responds
Kurtis Tripp, a gay man and founding member of the New GLF, responded to these criticisms in an email September 20. Responding to Segal's remarks, Tripp stated, "We have support from original GLF member and first gay Pride co-organizer, Fred Sargeant: he attended our launch event yesterday and spoke several words of support, as well as posting about us on social media in support. To be clear, the original GLF was made up of many smaller grassroots groups."

When asked about Sargeant, Segal said that he was not part of the original GLF, adding that "his views sadden me."

For his part, Sergeant confirmed he was not in the original GLF but said he was in the Homophile Youth Movement. He said he'd already corrected the mistaken listing of him as an original GLF member.

"I support full civil and health care rights for trans people, as my many transgender and transsexual supporters would confirm, if you wish," Sergeant said. "I do not support stripping women of the sex-based rights or the medicalization of predominately LGB youth. This is a complex discussion, a discussion that one side does not want to have. The other side frequently edits my statements to mischaracterize my views, a topic that I would be glad to discuss later this week."

Responding to Lambda Legal's criticism, Tripp replied, "It isn't pitting anyone against another by simply advocating for our rights as homosexuals."

Following up, Worth wrote, "I agree with Lambda that it is counterproductive when one segment of the community pits itself against another."

"It's intellectually mendacious to blame the targets of divisiveness for simply responding to it. We stand by our assertion that all people deserve the same right to psychologically safe spaces," Worth continued. "Safe spaces are not a zero-sum ideological war. Queer spaces, and single-sex spaces, can coexist in harmony."

Responding to Peraza's criticisms, Tripp replied that "it's inappropriate for transgender-focused organizations to tell homosexual-focused organizations how to advocate for themselves. If they wish to be allies to homosexuals, they're welcome to join us in working to build resources that focus on self acceptance rather than medicalization to deal with gender dysphoria in same-sex attracted people and especially youth; and to actively and vocally condemn transgenderist homophobia. These two issues, along with the dismantling of single-sex spaces, are in every way, the next fight for gay rights."

Responding to Smith's criticism, the New GLF stated, "To answer Gwendolyn Ann Smith, the goal of NGLF is the opposite of 'dividing the community.' We are all part of the community and our work advocating for the rights of non-trans people is not divisive."