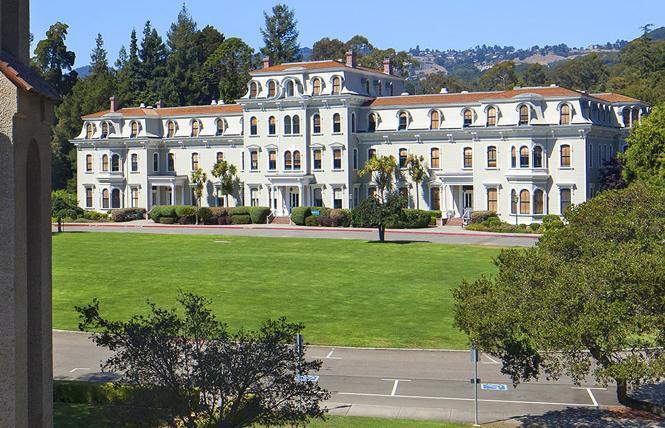 After a legal battle and community opposition, Mills College will be merging with Boston's Northeastern University after all, ending almost 170 years of women's-only undergraduate education at the Oakland institution.

The Mills College Board of Trustees voted to approve the merger September 14. It will be effective July 1.

"This is a big leap for Mills and an exceptional opportunity for our entire community," lesbian Mills College President Elizabeth L. Hillman stated. "An alliance with Northeastern empowers Mills to continue doing what it has done since its founding in 1852 — offer exceptional educational opportunities to students who want to make a difference. It also means that the Mills campus will remain a vibrant center of learning with deep and meaningful connections with the broader Oakland community. As we embark on a new path, we will honor our roots as a historic women's college."

But it would be a mistake to think that means it will continue as a women's college. Rather, the new Mills College at Northeastern University (the name of the school to be on all degrees after the July merger) will be "gender inclusive."

The cash-strapped, majority-LGBTQ college (58% during the 2020-2021 school year, according to official statistics) had announced last spring it would be closing shop in 2023; but shortly thereafter, Hillman changed course and announced a plan to merge with Northeastern University, a much larger private research university.

As the Bay Area Reporter subsequently reported, Mills College alumnae sued, alleging that Viji Nakka-Cammauf, Ph.D., who sits on the college's board by virtue of her position as president of the Alumnae Association of Mills College Board of Governors, was not given adequate access to records she'd need to review before she could vote on the merger.

The lawsuit alleged that by restricting how Nakka-Cammauf could view the records (in person at the college, without counsel, and without making copies), it was depriving her of the ability to make informed decisions.

But a few weeks after records were supplied electronically to Nakka-Cammauf, Pulido's temporary restraining order expired, and the merger went forward.

"Tuesday, a majority of trustees voted to approve the Northeastern merger," Pagonas stated. "Many Alumnae and those in the Mills community are disheartened that the trustees decided to forgo their fiduciary duties by blindly voting to approve this merger without a full and clear picture of Mills' financial situation or a finalized term sheet as it relates to the deal. Dr. Viji Nakka-Cammauf will continue to do everything in her power to uphold her fiduciary duties to the entire Mills community and protect the legacy of the college."

During a protest last month, alumnae invoked memories of when they were able to stop undergraduate admission of men in the early 1990s (though the school did start to allow graduate male admission in the 1990s, and gender-nonconforming people are admitted at all levels).

Northeastern President Joseph E. Aoun said this will be the beginning of a one-of-a-kind partnership.

"Together we have an opportunity to create something truly unique in higher education," Aoun stated. "We aspire to build a comprehensive, bicoastal university that leverages the complementary strengths of Mills and Northeastern for the benefit of students and society. Our world is in desperate need of what great colleges and universities provide: knowledge, discovery, innovation, inclusion, and service. By joining together, Mills and Northeastern can reach new heights and have broader impacts on our world."

Some other things will be changing, too, due to the merger.

"Mills and Northeastern will provide transition counseling and financial support to help each student evaluate options for continuing, and funding, their degree work. That support will enable currently enrolled students to complete their degrees without increases in anticipated costs," a statement reads. "Northeastern will honor and abide by the terms of tenure of Mills faculty who hold a tenured position or a continuous contract and will offer tenure-track faculty and adjunct faculty opportunities for employment. ... Northeastern will support Mills alumnae to engage with their alma mater through reunions and campus events. Northeastern will continue to support the Reinhardt Alumnae House. Alumnae of Mills will be eligible for benefits available to Northeastern graduates including a 25% tuition discount on degree programs in the Northeastern campus network."

Mills College Board of Trustees Chair Katie Sanborn stated that Northeastern has been respectful of Mills' mission.

"From the onset of discussions, Northeastern has consistently demonstrated that it respects and values the vital contributions that Mills offers, voicing strong support for integrating the powerful mission of Mills through the Northeastern network," Sanborn stated. "The Board sees the merger as a positive step forward that will enable the legacy of Mills to endure."

Nadine Dixon, a self-described dyke who was a member of the class of 2009, told the B.A.R. that under Northeastern's aegis, Mills will become "exactly what we've been educating women for 170 years not to be."

"There are benefits from this from a capitalist perspective: don't get me wrong, I'm not naive," Dixon said. "But what makes this place truly valuable to the world will be desecrated, and it's already begun.

"I basically feel like patriarchy, capitalism, and misogyny have won out against a revolutionary entity," Dixon added. "Mills College was creating women leaders and was an inclusive place. Now it has been sold to its antithesis. It is now owned by robber barons: the rich, white, male, heteronormative elite."

Updated, 9/15/21: This article has been updated with additional comments.