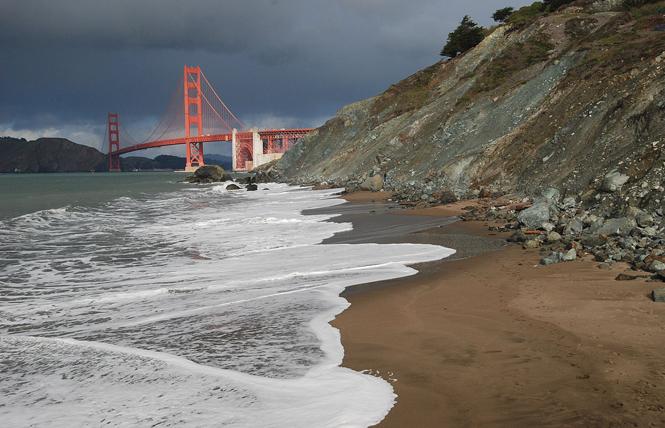 Our Family Coalition will have a town hall and cookout at scenic Baker Beach in San Francisco. Photo: Rick Gerharter

Our Family Coalition, the Bay Area-based organization for LGBTQ families and their children, will have a town hall and cookout at scenic Baker Beach in San Francisco Sunday, September 26, from 10 a.m. to 1 p.m.

An email announcement stated that OFC wants families to safely reconnect and it wants to hear from them about how they are doing and what they'd like to see from the organization moving forward. The in-person town hall will be safely distanced and there will also be a virtual component for those who want that.

As the Bay Area Reporter recently reported, OFC has playgroups for queer parents of newborns and toddlers in a new dedicated room at its San Francisco office. The play space is packed with toys and children's books as well as comfortable adult-sized seating. Free for parents to use largely on a drop-in basis four days a week in the mornings and early afternoons, donations are also accepted. Those who do stop by will have their temperature checked and be required to wear a mask due to the ongoing COVID-19 pandemic.

The agency also brought back one of its former program directors, Shareena Clark Ascher.

At the upcoming cookout, Executive Director Mimi Demissew will be slinging the burgers, hot dogs, and veggie burgers.

There is no cost to attend. To RSVP, click here.

The program, "United by Love-Divided by Law" coincides with History San José's current exhibition, "Coming Out: 50 Years of Queer Resistance and Resilience in Silicon Valley" that was spearheaded by gay former Santa Clara County supervisor Ken Yeager. According to a news release, Rickard will discuss her work to strike down the former federal Defense of Marriage Act and her advocacy for same-sex binational couples. Rickard fell in love with an English immigrant, Karin Bogliolo, and the couple married in 2008. But their union was not federally recognized because of DOMA, a 1996 federal law that defined marriage as between one man and one woman. Because of that, Rickard could not legally apply to sponsor her spouse.

Rickard worked with the DOMA Project and wrote a book, "Torn Apart: United by Love, Divided by Law," about her experience. After the U.S. Supreme Court overturned a key provision of DOMA in 2013, Rickard immediately sponsored her wife for a green card. That same year, the release noted, then-President Barack Obama recognized Rickard as a Cesar Chavez Champion of Change for Immigration, and she spoke on a panel at the White House.

Constitution Day is being held in honor of the delegates to the Constitutional Convention signing the document September 17, 1787.

Rickard will be joined at the San Jose event by Ann Raval, former chair of the Federal Communications Commission, and former Congressman Mike Honda (D-San Jose). Remarks from Congresswoman Zoe Lofgren (D-San Jose) will be read. After the program, guests will be able to take home a free pocket copy of the Constitution (available in English and Spanish).

The program is free, but people are urged to reserve tickets ahead of time.

Castro COVID center ends for now
The Castro LGBTQ Cultural District has had to end its Saturday COVID testing and vaccine station at Noe and Market streets.

Stephen Torres, secretary of the cultural district's board, wrote in an email that it is working to find another location in partnership with the Department of Public Health and the Castro Merchants Association. Torres wrote that the district and health department were scheduled to do a site assessment September 15 and are hoping to have third doses of the vaccine available for those living with HIV by September 18. (The B.A.R. will update information on its website when available.)

COVID shots in the East Bay
Meanwhile, immunocompromised residents in Alameda County can begin scheduling a third vaccine dose, according to an item in Supervisor Nate Miley's newsletter.

It stated that third doses are authorized for moderately to severely immunocompromised people who have received two doses of Moderna or Pfizer (mRNA vaccines).

Immunocompromised individuals are encouraged to speak with their health care provider before getting the third dose, and they must sign a self-attestation indicating that they qualify. The attestation form can be signed electronically when making an appointment. Individuals must wait 28 days or more after their second dose and must register for the same vaccine (e.g., two doses of Moderna must be followed by a third dose of Moderna).

Miley's newsletter points out that neither the federal Food and Drug Administration nor the Centers for Disease Control and Prevention have yet authorized or recommended boosters or additional doses for anyone other than those who have immunocompromising conditions.

The county is following the science and awaits federal and state public health guidance before administering boosters, the newsletter states. In the meantime, Alameda County-supported vaccination clinics will continue?focusing?on eligible residents who are not vaccinated or not fully vaccinated. If boosters are authorized and recommended for the general public, Alameda County will prioritize people at highest risk for severe illness or exposure, the newsletter states.

Dining Out for Life-East Bay
Project Open Hand will benefit from Dining Out For Live-East Bay Thursday, September 30.

Those who enjoy meals at participating restaurants, which will donate a percentage of the day's proceeds, will help Open Hand and its HIV/AIDS services that are provided in the East Bay. Project Open Hand also provides services in San Francisco.

According to a flier, participating restaurants are located in Fremont, Alameda, Emeryville, Berkeley, and Oakland, where the event started three years ago. In keeping with changes due to the COVID-19 pandemic, many of the participating eateries include outdoor dining and take-out options.