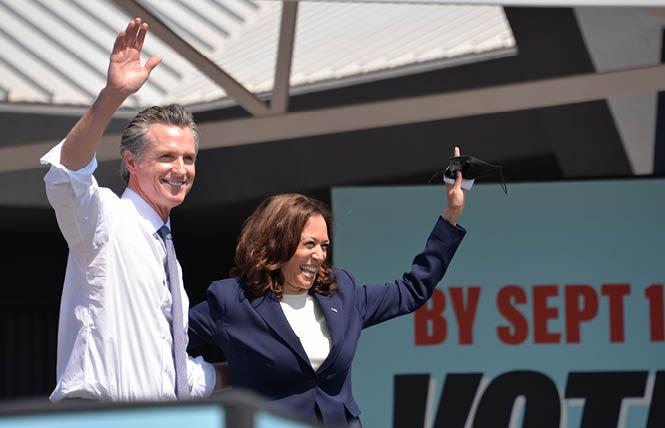 Injecting some much-needed political star power into the race to save Governor Gavin Newsom's political career, Vice President Kamala Harris flew to the Bay Area Wednesday to rally supporters ahead of the September 14 recall election.

Arriving outside the International Brotherhood of Electrical Workers-National Electrical Contractors Association Joint Apprenticeship Training Center in San Leandro midday September 8, Harris began her remarks by speaking about Newsom's courage in supporting same-sex marriage in San Francisco in 2004, back when he was the mayor and she was district attorney.

"That Valentine's weekend in 2004," Harris wistfully recalled. "Gavin didn't hear 'it can't be done.' He had the courage — as he's had his entire career — to believe in and see what is possible. To see what can be unblinded by what has been. That's the kind of leadership this daughter of Californians wants."

Harris said it was nice to see the Bay Area, her native region, from her plane.

The nation's first female vice president said that while watching the morning news earlier, she caught a clip of Texas Governor Greg Abbott (R) speaking about a controversial new law in the Lone Star State that bans abortions after six weeks.

She went on to say that Republicans are funding the recall effort because they are afraid of how effective Newsom is as governor.

"They wouldn't be trying to recall him except that they know he is a national leader," Harris said. "This is why they are putting so many resources and time into trying to take out Gavin Newsom. It is because of his vision. It is because of the agenda."

And California could be a dress rehearsal of efforts to oust Democratic officials in other states, too, if the recall succeeds, Harris claimed.

Newsom, saying that "this is a consequential election," said that if he loses both COVID-19 safety measures and women's reproductive freedom are in danger, bringing up Texas' anti-mask and extreme anti-abortion policies as a warning.

"If we're not successful at rejecting this recall, Larry Elder will be sworn in as your next Governor," Newsom said, eliciting boos.

Elder is the leading candidate of those running to replace Newsom. A radio show host, Republican Elder has vowed to reverse mask and vaccine mandates and pledged to anti-abortion advocates that he'd use line-item veto power to stop public funding of the procedure.

"It is both pathetic and telling that Vice President Harris and Governor Newsom think political campaigning is a better use of time today than working to rescue California children and families, Americans and allies who were abandoned in Afghanistan by the Biden administration," Patterson stated. "One thing Harris and Newsom have in common is that they have utterly failed those they were elected to serve, and voters won't forget it. On September 14, Californians will vote to recall Gavin Newsom, set new priorities and fix our broken state."

She landed at 11:15 a.m. in Oakland and was greeted by Congresswoman Barbara Lee (D-Oakland) on the tarmac before her motorcade made its way to San Leandro.

Lee spoke before Harris and Newsom, welcoming people to her district.

"Even as our vice president is working side by side with President Biden to beat back the pandemic and protect America's interests around the world, she stays rooted in her community," Lee said. "We're so proud of you and you'll always have our support."

Dem regulars line up to back Newsom
Speaking before Lee was a constellation of Democratic elected officials and partisans.

Assemblywoman Mia Bonta (D-Oakland) — who was just sworn in Tuesday to represent Alameda, San Leandro, and a portion of Oakland in the Assembly — said that it is Newsom's progressive record that created such enmity against him in the GOP.

"Republicans have launched this recall attack against him," Mia Bonta said. "The Trump Republicans who seek to replace Governor Newsom, like Larry Elder, pose a great threat to Californians. We can't go backwards here. There's too much on the line. Vote No September 14."

Bonta's husband, state Attorney General Rob Bonta, also spoke. He'd preceded her in the Assembly before Newsom appointed him as the state's top prosecutor earlier this year, and thanked him for leading the state amid the COVID-19 pandemic.

"Let's make no mistake," Rob Bonta said. "Governor Gavin Newsom has championed more progressive policies than any other governor in the history of California."

Insurance Commissioner Ricardo Lara, the first openly gay person ever elected to statewide office, said that defeating the recall is essential to protecting LGBTQ rights in the Golden State.

One of those attending the rally was Honey Mahogany, a queer trans nonbinary person who is the chair of the San Francisco County Democratic Party and a legislative aide to District 6 Supervisor Matt Haney. Mahogany told the Bay Area Reporter that it is nice to see the vice president supporting local Democrats.

"It's clear there's been a nationwide strategy to oust Democrats and progressives across the spectrum," Mahogany said. "So it's nice to see our federal representatives standing with our electeds when they're under attack."

When asked to give examples of this strategy, Mahogany said, "I've been paying much attention to what's going on locally — phone banks, door knocking with all our Democratic clubs — but across the nation our governors are being attacked, school boards, and our DA [Chesa Boudin]. Republicans are funding the undermining of Democrats in elected office."

The recall ballot asks two questions: whether Newsom should be removed from office and then a vote for one of the 40-plus candidates to replace him. The California Democratic Party, Newsom, and many others have urged people to vote no on the first question and to leave the second one blank. Newsom, who's in his third year of a four-year term, is barred from running as a recall candidate. Golden State residents have until next Tuesday to mail in or drop off their ballots.

Recent polling has found that conservatives have had difficulty in expanding their base of support for ousting Newsom, but several earlier surveys had shown a very close race on the first question of whether to remove Newsom from office.

In a sign of the huge stakes in the race, President Joe Biden is expected to campaign with Newsom Monday, most likely in Southern California. (Updated: On September 9, the Newsom/No on the Recall campaign announced Biden would be appearing in Long Beach for the final rally.)

Harris walked back on to her plane at Oakland International Airport at 2:36 p.m. According to a White House pool report, Air Force Two served California favorite In-N-Out Burger en route back to D.C.

There were 192 people in the audience, plus 70 members of the press, the White House pool report states.

Outside the event space, a number of protesters expressed their disapproval of both Newsom and the Biden administration's handling of the Afghanistan withdrawal last month, with several waving the flag of the Islamic Republic of Afghanistan, which was overthrown by the Taliban some weeks ago.

The protesters were urging support for continued U.S. action against the Taliban and support for women in the central Asian country.

Margie Vanderhave was among those outside advocating for the recall.

"Newsom has done nothing for our state," she told the B.A.R. "There's homelessness everywhere, taxes, and his son goes to a private school while our kids we have to send to school with masks on."

Updated, 9/8/21: This article has been updated with a statement from the state GOP chair and additional comments.

Updated, 9/9/21: This article has been updated to note that President Biden will be in Long Beach on Monday for the Newsom/No on the Recall's final rally.