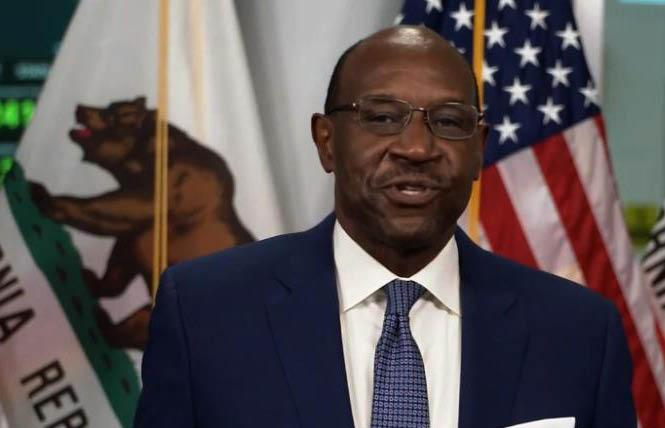 The first-ever openly gay Supreme Court of California justice, Associate Justice Martin Jenkins, is not only the first openly LGBTQ justice on the high court, he's also only the third Black man ever to serve on it.

Jenkins grew up in San Francisco the son of a nurse and a janitor. He was a pro football player briefly after college, before being convinced by a coach and a college dean that he'd be a great lawyer. In his mid-20s, after serving in the Alameda County District Attorney's office, he prosecuted police misconduct, Ku Klux Klan cross-burnings, and other racial violence in states across the country for the U.S. Department of Justice.

Jenkins, 67, came out as gay in his 50s. When he accepted the Supreme Court nomination, he addressed young people "struggling with their identity." He said coming to terms with being gay had been "perhaps the greatest challenge of my life" but that he had gone on to greatness "because of the struggle," not in spite of it.

"Struggle brings you to grips with the reality of who you are," he elaborated on this week's Out in the Bay Queer Radio and podcast: "The lack of struggle does the opposite: it allows us to believe things about ourselves that are not anchored in reality. ... When you can show up as who you are, authentically, that's a power beyond measure."

Other highlights Justice Jenkins shared on Out in the Bay:

On a dying good friend inspiring Jenkins from his deathbed to finally come out: "He said if he had one wish for me, it would be that I begin to live my life as I truly was. ... That was difficult to throw off, to dismiss it and go back to a life of fear."

On the importance of being a Black gay man on California's Supreme Court: "There are times when life experience ... can illuminate the fabric of the law as it's being discussed. The law is about people and for people. ... That kind of cross pollination [and] education about the impacts of what we're deciding is crucial."

On how his white Santa Clara University football coach motivated him: "He encouraged me to go to law school and invited several African American law students from Santa Clara to come to talk to me." That encouragement and many others underlay Jenkins devotion to mentoring and other community service: "I realize how ... that kind of support can change the trajectory of someone's life."

Out in the Bay: Friday broadcasts start with 'The Guncle' interview
Sign up!