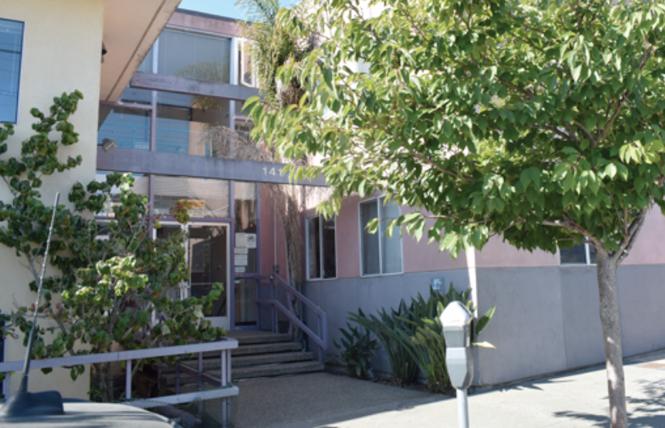 The entrance to Leland House, which will change to a transitional model beginning in October. Photo: Courtesy Elizabeth McLachlan Consulting

Leland House, the second-largest HIV/AIDS housing facility in California, will be managed by PRC beginning October 1 as it changes from a facility for the chronically ill to becoming a site of transitional care. It is an acknowledgement that 40 years into the AIDS epidemic, most people living with HIV are living longer, relatively healthier lives.

The Visitacion Valley building on Leland Avenue is currently owned by Mercy Housing California, which bought it in 1996, and is operated by Catholic Charities, which opened the current facility there the following year.

Some people at the 45-bed facility who do require more intensive care will have to be relocated to other facilities, according to Brett Andrews, a gay man who is the CEO of PRC.

"For those still in need of a high level of medical care, they are being repositioned in the system of RCFCI care," Andrews said, referring to a residential care facility for the chronically ill.

An RCFCI is the type of facility Leland House is and will be until the end of next month. At that point it will become a transitional residential care facility, or TRCF.

Peter Claver Community is an RCFCI run by Catholic Charities in the Western Addition.

However, over the years the needs of the HIV/AIDS population in San Francisco have changed, both Andrews and Hand said. Catholic Charities is in the best position to run an RCFCI while PRC is better suited to run a TRCF, they said.

"It's a really positive change and for us it's bittersweet not to be running Leland House," Hand said. "But we have absolute confidence in PRC and we still maintain our vital work with HIV/AIDS."

Focus on transitional housing
Andrews said that the new Leland House will be focused on transitional housing. There will be renovations to the 20,000 square foot building to make it amenable to that purpose, including removing some medical components, and "moving into programming that can help people become more independent — literacy, cooking classes."

Andrews did not say how many people will need to be moved, though he said that it is currently not at capacity, and that those who do will be relocated to either Peter Claver, or Maitri Compassionate Care in the Duboce Triangle neighborhood.

"For the remainder, they will stay at Leland House and will be there through our renovations," Andrews said. "We will stage it in a way folks will be able to stay."

Following the renovations, there will still be 45 beds. People will be able to stay for 18-24 months, according to Andrews, who also stated, "If needed, we will determine (case by case) whether a client needs to stay a bit longer beyond a 24-month time period and make exceptions."

The renovations will take "a few months," though Andrews could not say when it will be completed more specifically.

"There could always be a surprise when you open up the walls," Andrews said.

The cost is currently being assessed, he said. The renovation funds will be coming from the Mayor's Office of Housing and Community Development's capital projects division, Andrews said. A consultant's report listed various issues and put the estimate of repairing "immediate need" items at nearly $2 million. Big-ticket items include the roof, elevator, and flooring.

"We are going to do a more complete assessment," Andrews said. "Right now, our priority with Catholic Charities is to move these folks who need a high level of care so there's as little a disruption as possible. After that, we can put meat on the bones of what the renovation would look like."

Andrews said that the change of hands came about after a strategic assessment from the MOHCD.

"The Mayor's Office of Housing and Community Development is committed to housing choice and opportunity for residents living with HIV/AIDS," stated gay MOHCD Director Eric Shaw in a news release. "We heard from the community and service providers regarding the need to advance new models for care and housing and we look forward to partnering with PRC to implement a new care model at Leland House."

Shaw's office did not respond to a request for comment for this report.

Mercy Housing stated its support, too.

When reached for comment, Maitri Executive Director the Reverend Rusty Smith, a gay man, stated in an email that "I am not trying to be evasive but Maitri has remained focused on excellence in clinical care and the people we serve."

"I do not have a comment or any insights that I can share regarding repositioning," Smith continued. "Maitri has not played a big role in the repositioning design process. We continue to provide hospice, respite, and restorative care in line with our history and mission and we have not changed our program or process."

Challenges
Bill Hirsh, the executive director of the AIDS Legal Referral Panel, wrote about the challenges of converting RCFCIs in general during this month's highlights email from the nonprofit.

"As with ALRP's legal services, some other models of care supporting people living with HIV have needed updates to meet clients' changing needs," he stated. "Recent efforts to transition residents of Residential Care Facilities for the Chronically Ill (RCFCIs), a type of licensed facility established early in the epidemic to provide housing with an intensive level of health care support for those with acute needs, have highlighted the complexities of such transitions."

Hirsh stated that ALRP "stepped in to ensure that the system of care was responsive to their needs."

"We stood fast in our commitment to ensuring that all clients had access to an affordable housing unit, and got the support they needed to make the transition," he stated.

Speaking with the B.A.R. August 30, Hirsh said that "we were not really clear on how quickly the plan to move folks was going to go, and rather suddenly, we got calls from a number of clients concerned they were going to lose their housing."

"Most of the folks housed in these places have had serious health challenges and have been living there for years," Hirsh said. "We made sure the ones who needed a subsidy and support for the transition got the support they needed. Change can be hard — it is understandable that folks who've received a high level of health care support and housing would be anxious when at risk of losing that housing. But it's been good seeing the city come together to make sure people have the housing and care they need going forward."