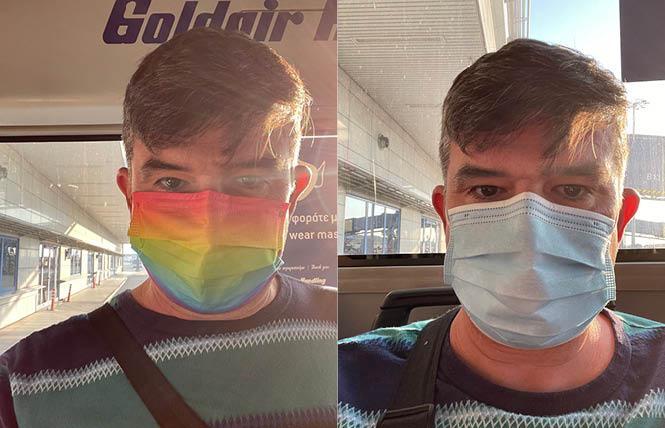 In response to a gay passenger's complaint he was ordered to take off a rainbow-colored mask on a Lufthansa flight, the German-based airline is clarifying that its staff have discretion over enforcement of its face covering policy imposed to protect its crew and travelers from COVID-19.

As the Bay Area Reporter reported online July 26, West Hollywood resident Scott Schmidt was ordered to remove the rainbow-hued surgical mask he was wearing by a Lufthansa gate agent at the Athens International Airport. He was preparing to board a bus to take him and his fiancé from the terminal to the aircraft waiting on the tarmac when the woman scanning his ticket inquired about the mask.

It was the same style of surgical mask adorned with the colors of the international symbol for the LGBTQ community that Schmidt had worn with no problems on his Lufthansa flight leaving Los Angeles International Airport July 16. Nonetheless, the gate agent in Athens told him he had to put on "a normal mask."

Luckily, a hotel the couple stayed at had left a safety pack in their room containing hand sanitizer and several blue-colored surgical masks. As he likes to keep the freebies hotels provide their guests, Schmidt had grabbed it when they checked out and was able to put it on in order to board his return flight home via Munich to Los Angeles.

After he landed in California Schmidt posted about the mask incident on Twitter and tagged Lufthansa on it. He also included being ordered to remove the rainbow face covering in a Facebook post about the couple's weeklong sojourn.

Monday, having gotten no response to his Twitter post, Schmidt emailed Lufthansa a complaint via the airline's website. He also emailed several LGBTQ advocates in Europe and Greece to inform them of his experience.

And Schmidt contacted the B.A.R. to help publicize the incident and inform other LGBTQ Americans who may be traveling overseas this summer or fall that they may want to pack generic facemasks along with any masks bearing special patterns or designs.

"They weren't providing them for people," Schmidt told the B.A.R. in terms of the airline having an approved style of mask it could have given him to wear. "I think for travelers, it is important to respect the laws and rules in other countries. We have all been through this pandemic in different spaces and different experiences; I was trying to do my best to comply and do it with my own style.

The B.A.R. had reached out to Lufthansa spokespeople both in the U.S. and Europe on Monday but did not get an initial response until close to midnight from a woman who handles press inquiries related to Europe, the Middle East, and Africa. She asked for Schmidt's flight number in order to look into the matter.

Wednesday, July 28, Christina Semmel, the airline's manager for corporate communications in North America, sent the B.A.R. a more detailed reply via email. She noted that because check-in and gate agents at the Athens airport are service providers, Lufthansa has no report of Schmidt's occurrence from the morning of July 24.

Semmel did explain that all personnel working for, or on behalf of, Lufthansa have discretion over ensuring that passengers are abiding by the airline's COVID protocols, such as wearing the appropriate style of face coverings on its flights.

"All masks must conform to the required standard, and if our cabin crews or ground staff, as well as external service providers, cannot distinguish between a surgical mask and a cloth mask, they will insist on the customer switching to a medical mask, since we simply cannot take any chances," explained Semmel. "When available, a medical mask is promptly provided." 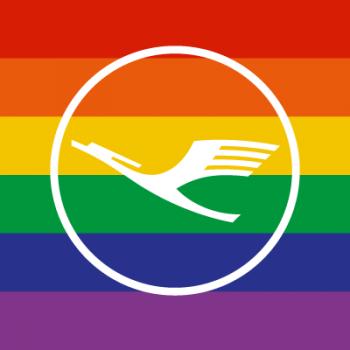 According to the mask policy posted on Lufthansa's website, German federal and state legislations require passengers to wear the same face masks that are "worn in everyday medical practice, also known as surgical masks. They are medical products and were designed for the protection of others."

"As an international aviation company, the safety and security of our passengers is, by far, a main priority," wrote Semmel. "As safety relates to our mask regulations, on Lufthansa Group flights, passengers are required to wear a protective medical mask — either a standard surgical mask or an FFP2 mask/ KN95/ n95 mask with the KN95/N95. German federal and state legislation requires the wearing of these masks — also known as surgical masks — during boarding, while inflight and when leaving the aircraft."

In response to a request for comment for this story, Schmidt told the B.A.R. since he complied with the order to change his mask there wasn't an incident to report so the airline wouldn't have a record of it.

In an email he sent to one of the airline's customer service representatives and had earlier shared with the B.A.R., Schmidt explained he reached out to Lufthansa so it was "aware of your airport representative's actions and could take steps to ensure that other LGBT passengers did not face similar discrimination in the future."

As for support of the LGBTQ community at Lufthansa, which currently uses a rainbow-themed logo for its corporate Twitter accounts, Semmel told the B.A.R. it is part of the company's core principles.

"Diversity and equality are core values for the Lufthansa Group and our corporate culture," she wrote. "In fact, as a global company, diversity is one of our leading pillars. The appreciation and acceptance of all people (employees, customers, suppliers, etc.), regardless of their gender, age, ethnic origin, religion, nationality or sexual identity, is one of Lufthansa Group's guiding principles."

UPDATED 7/28/2021with a response from passenger Scott Schmidt.