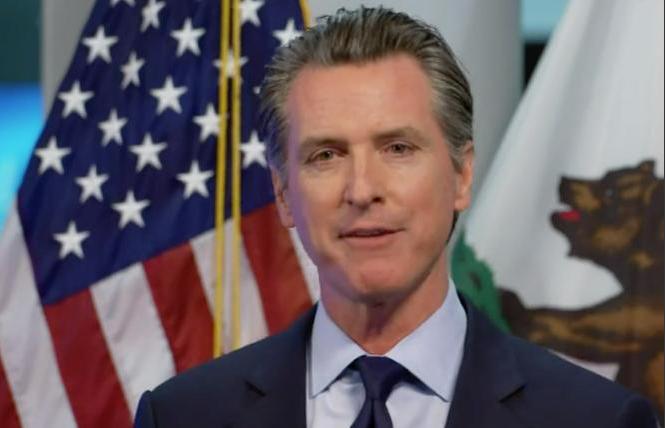 The authors of two bills benefiting Californians living with HIV are praising Governor Gavin Newsom for signing their legislation into law. He did so without comment on July 23.

Senate Bill 283, authored by Senator Lena A. Gonzalez (D-Long Beach), strengthens the Equal Insurance HIV Act of 2020. It imposes a prohibition as of January 1, 2023 on a life or disability insurance insurer from considering an applicant's occupation in determining whether to require an HIV test. It also clarifies that limiting benefits payable for a loss caused or contributed to by HIV is allowed if it was part of the original underwriting risk.

And the law also makes clear that the misdemeanor for willful, negligent, or malicious disclosure of HIV test results to a third party is now punishable by imprisonment for a period not to exceed 364 days.

"This prioritizes equity for Californians living with HIV," tweeted Gonzalez, who also thanked gay state Insurance Commissioner Ricardo Lara and his staff for assisting with the bill.

Under SB 258 older people with HIV will be considered of "greatest social need" when it comes to programs and services administered by the California Department of Aging. Gay state Senator John Laird (D-Santa Cruz), a founder and former executive director of an AIDS agency in his coastal city, authored the legislation taking effect January 1.

"We must ensure that LGBTQ seniors have the affirming care and support so they can age in peace with dignity," stated Laird. "It's incumbent upon us to not force individuals back into the closet for them to access adequate care. Once again, I'd like to applaud the governor for his continued support of the LGBTQ community and to my colleagues for making this a priority bill."

"Many older people with HIV are long term survivors of the AIDS epidemic. They have lost countless loved ones and entire networks of social support. They also continue to face discrimination and alarming levels of stigma," Thompson noted.

"Language matters and it's about time we update our laws to reflect the diversity of our state, and its current and future leaders," stated Lara. "Embracing gender-neutral language in our laws reflects the hard work that so many are doing for a better, more inclusive society."

Newsom has now signed into law five of 12 bills related to LGBTQ concerns in this legislative session. Earlier this month he had signed Bauer-Kahan's AB 439 allowing deceased Californians who are nonbinary to be identified as such on their death certificates.

LGBTQ Dem club to revote on Assembly race nod
Ahead of the June special election for the East Bay's open 18th Assembly District seat, no candidate was able to secure an endorsement from the East Bay Stonewall Democratic Club. Now the LGBTQ political group will revote on backing one of the two women who advanced to the August 31 runoff race.

The Stonewall club will hold a virtual endorsement meeting the evening of August 3 to see if either of the two candidates can now nab its nod in the race. Only those members who had paid their annual dues by this past Tuesday, July 27, can vote.

The club intends to post 10-minute recorded interviews with each candidate to its website by Friday, July 30, to help the eligible endorsement voters make up their minds.

Alameda Dems to take up pro-LGBTQ endorsement policy
Leaders of the Democratic Party in Alameda County are expected to vote at their August 4 meeting on banning endorsements for anti-LGBTQIA+ candidates seeking elective office. It is believed the local party would be the first in the state to adopt such an endorsement ban.

The Alameda County Democratic Central Committee, which sets policy for the local party, passed a resolution in June supportive of not backing candidates with a history of opposing LGBTQIA+ rights or who won't commitment to support LGBTQIA+ rights if elected. Since then committee members have been working to make it official policy by enacting a bylaws change.

According to a copy of the proposal shared with the Bay Area Reporter, candidates will be deemed anti-LGBTQIA+ for voting "against a show of solidarity with the LGBTQIA+ community" or for policies "harmful or exclusionary to the LGBTQIA+ community," or if they've made public comments against LGBTQIA+ issues even if they didn't act upon those views.

For details about the meeting next Wednesday, click here.

Web Extra: For more queer political news, be sure to check http://www.ebar.com Monday mornings for Political Notes, the notebook's online companion. This week's column looked at the housing policy stances of the candidates in the special election for the East Bay state Assembly seat.