Swan Song: remembrance of things past 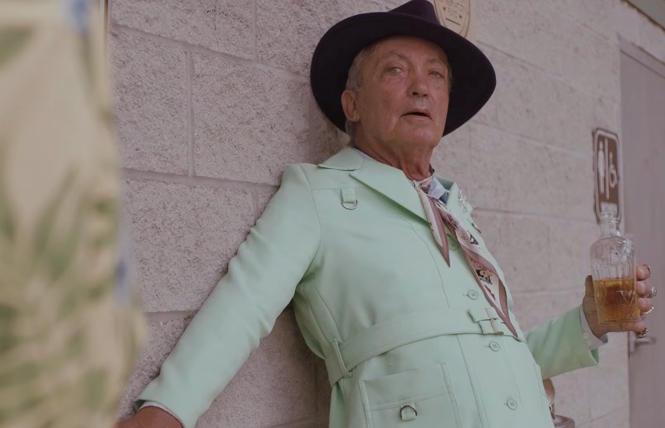 If the mayor of Sandusky, Ohio hasn't done so yet, he should definitely present gay filmmaker and native son Todd Stephens with a key to the city. Stephens has managed to make Sandusky, which Charles Dickens described as "sluggish and uninteresting...something like the back of an English watering-place out of the season," somewhat captivating.

He did so in David Moreton's beloved, queer 1996 flick Edge of Seventeen (for which Stephens wrote the screenplay), as well as his 2001 directorial debut Gypsy 83 and 2006's over-the-top comedy Another Gay Movie.

Sandusky also figures prominently in Stephens' wonderful award-winning new movie Swan Song (Magnolia Pictures). "Inspired by a true icon" (Pat Pitsenbarger, 1943-2012), Swan Song stars Udo Kier as Mr. Pat, the formerly famous hairdresser known for the magic he worked with a brush, a comb, and hairspray on the heads of the city's socialites.

Retired for years, following a series of bad breaks, including a stroke, Pat is reduced to residing in an assisted living facility, wearing sweatpants and gym shoes with Velcro straps, sneaking a few puffs on a More cigarette when he can. An obsessive who steals napkins from the dining hall and spends hours folding them just so, Pat has one ally in the place, the catatonic Gertie (Annie Kitral).

Pat's fortunes could potentially change following a visit from lawyer Shanrock (Tom Bloom), who tells him that not only has his richest former client Rita (Linda Evans) died, but that she stipulated in her will that she wanted Pat to do her hair and make-up, for which he will be paid $25,000.

Pat, who hasn't "pulled hair in years," initially declines because he had a falling out with Rita, when she ceased to be his client and went to the salon across the street run by his competitor (and former employee, Dee Dee, played by a restrained Jennifer Coolidge). Pat tells Shanrock, "Bury her with bad hair." 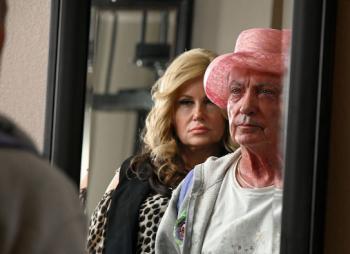 After a restless and emotional night, Pat has a change of heart. He digs out his fanny pack, stuffs it and his pockets with some Mores, favorite rings, a check from the government, his scissors, and other accoutrements, and slips out of the home.

As Pat flies the coop, Swan Song becomes a road movie on foot. On his route to the funeral home, Pat pops into a convenience store, stops off at the cemetery where his lover David is buried, pays a visit to his former beauty supply store which is now a black hair salon (one of the best scenes in the movie) and jumps rope with some kids.

When he gets to the former location of his and David's old house, he's heartsick to discover that it's been torn down.
Because David, who died in 1995, didn't have a will, everything went to his nephew, leaving Pat with nothing.

To add insult to injury, Pat's former salon is empty with "for rent" signs in the window while Dee Dee's shop, Kharma, is thriving. Making matters worse, Pat finds out from Shanrock that it's a six-month wait until he gets the $25k for doing Rita up for the wake. Shanrock gives Pat some money to cover beauty supply expenses.

Inside Kharma, Pat and Dee Dee have a showdown (another marvelous scene), but Dee Dee relents and gives Pat the bottle of once-popular shampoo for which he's been hunting. After this victory, Pat swings by a resale shop where he encounters clerk Sue (Stephanie McVay, a Stephens regular) who recognizes him ("Who could forget the Liberace of Sandusky?") and sends him on his way in a mint green leisure suit.

A couple more significant happenstances — one with Rita's gay grandson Dustin (Michael Urie) and a marvelous visit to a local gay bar on its closing night (after 41 years!) — as well as what appears to be a reunion with old friend Eunice (Ira Hawkins), and the stage is set for Pat's final meeting with the deceased Rita.

Stephens' masterful Swan Song screenplay proves that he hasn't lost his gift for comedy and drama, something he first demonstrated in Edge of Seventeen. Swan Song is the kind of movie where you laugh out loud, have a good cry, and then laugh so hard you cry.

Kier gives a career-high performance and deserves to be remembered during awards season. Coolidge and the rest of the supporting cast are all exceptional, allowing Swan Song to take wing and soar.

Frameline45 : homos, where the heart is