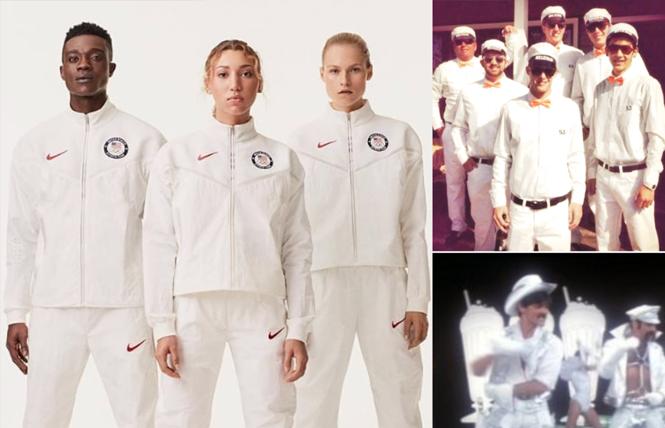 "We have been cornered into a situation where we cannot even stop now. We are damned if we do, and damned if we do not."
— Japanese Olympic judo medalist Kaori Yamaguchi

There's something decidedly queer about the Summer Olympic Games set to open in Tokyo this weekend, and it has little to do with the record number of openly LGBTQ athletes who will be competing.

For sure, many of us are rightfully celebrating this Olympics as being the gayest ever. According to lists compiled by Outsports and various other organizations, 15 openly gay, lesbian, or bisexual athletes competed in the Summer Olympics in 2008 in Beijing; and 23 in the Summer Olympics in 2012 in London. That number jumped 68 athletes who were either openly gay or lesbian during the 2016 Summer Games in Rio de Janeiro or came out shortly thereafter.

This year? The number skyrockets to at least 157, including the first two openly transgender athletes — more than the number of openly LGBTQ athletes in all previous Summer Games combined.

The explosion in numbers is in and of itself a triumph of Olympic proportions. It signifies the bravery of past athletes to come out and speak up. It is a testament to tireless work that has gone into education, support, and advocacy for equal rights and acceptance. It gives individuals in our community extra incentive to watch, cheer, and celebrate their comrades in sports.

But in the more classic sense of the word queer, so much else about this Olympics is odd or off-putting.

• More than 11,000 athletes will spend the next two weeks in Japan in a spectacular array of tournaments and matches showing athletic prowess that would trigger spontaneous cheers of wonder and delight from the crowds if anyone were actually in the stands to see them.

The Summer Games of the XXXII Olympiad were delayed a year because of the COVID-19 pandemic. The lack of spectators in the stands is because a staggeringly low percentage of host Japan's population has been vaccinated and the city of Tokyo remains in a health-crisis lockdown. The reason why the event has not been canceled outright, despite polls indicating that the vast majority of Japanese residents want it to be stopped because of the risk they face of the Olympics superspreader event, is because the International Olympic Committee stands to lose billions of dollars (which, by the way, for the most part never find their way to the pockets of the athletes whose talents generate the cash) in advertising and sponsorship revenue if they fail to produce an event.

The decision to hold the Olympics despite the ongoing pandemic is so unpopular in Japan that this week Toyota Motor Company said it was pulling all of its local television advertising for the duration of the Olympics.

• Already COVID cases have been playing heavy with Olympic rosters. American tennis star Coco Gauff and gymnastics alternate Kara Eaker tested positive this week for the virus and will miss the Olympics. USA Basketball announced that Katie Lou Samuelson will be unable to play in the women's three-on-three competition because of health and safety protocols. Two-dozen people with the South African soccer team in the Athletes Village, as well as one of the country's rugby coaches, have tested positive — all five days before the start of the Olympics.

• Athletes were warned they could be fined, disqualified, or deported if they violate social distancing protocols or engage in optional physical contact — and were also given 160,000 free condoms. Guess we can expect a lot of spontaneous water balloon fights.

• Many of the athletes were surprised when they arrived at the village and discovered they would be sleeping on cardboard beds. Rumor immediately spread the beds were made from cardboard so athletes would think they were too flimsy to hold up under the weight of two or more people on them having sex with or without those condoms. Athletes have since proved that rumor false by posting videos online of them jumping up and down on the beds and we are told cardboard was used so the material can be recycled after the Olympics are over and the athletes have finished jumping up and down on them throwing water-filled condoms at each other.

• Organizers pledge the opening ceremony is built around the concept of "Unity in Diversity."

Not sure if Japanese lawmakers ever got that memo. A national ban on same-sex marriage has been ruled unconstitutional in court but it still is not legal in Japan; Japanese law requires transgender adults to be sterilized if they want to be legally recognized by their gender identity; and the legislature went into recess from its latest session without passing a popular promised anti-discrimination bill.

Not sure if the international governing body for swimming ever got the message either. In late June, it ruled that swimmers cannot use a newly designed swim cap that accommodates natural Black hair because international swimmers had "never used, neither require to use, caps of such size and configuration," and that it did not follow the "natural form of the head."

Not that it offered a competitive advantage — they just hadn't ever allowed it before.

Who knows? Maybe they're not racist, just really fussy about headwear.

• The dominant star of the Summer Olympics, of course, will be the same it always is: the national and international cartel of aristocratic politicians and dealmakers who control the profits, policies, and power structure of the Olympics — the ones who hear the motto "Citius, Altius, Fortius" and think, "More for Us, More for Us, More for Us."

For them, control of the Olympic movement is the ultimate addiction. They will do all they can to preserve everything around them exactly as it has always been in their pristine bubble world in order to maintain what they have.

Had a bit of weed to self-medicate depression and loss in your personal life? Hey, we know it gives you no competitive advantage, but we don't like it so you're off the team.

Feel the need to speak out against violence and racism while you have the public's attention? We got your back, but don't pull that crap on our watch. We own your 15 minutes of fame and don't want you to say or do anything that would offend viewers or sponsors who do not want to be bothered to think about the issues.

• Worried America is too deeply divided these days, with red and blue now symbolizing regional and parochial partisanship rather than national unity? Then you'll be glad to know Team USA will march into the opening ceremony in uniforms of pure gleaming white. Not sure if that sends any message regarding unity or diversity — or swim caps, pot smoking or political protests — but the white-on-white jacket and pants ensemble definitely lacks fashion sense. I can't decide what look they were going for: the Village People in the milk commercial scene in the movie "Can't Stop the Music" or the "Melk Men" who blessed SF Giants home games in 2012 to cheer on outfielder Melky Cabrera during another World Series run (before he was suspended for failing a drug test).

Can't make this crap up.

NHL prospect comes out
Luke Prokop, a former Western Hockey League player from Edmonton, Alberta who was selected by the Nashville Predators in last year's NHL draft, announced on Twitter this week that he is gay. This makes him the first openly gay player under an NHL contract.

"Today I am proud to publicly tell everyone that I am gay," Prokop, 19, wrote on Twitter July 19. "It has been quite the journey to get to this point in my life, but I cannot be happier with my decision to come out. From a young age I have dreamed of being an NHL player, and I believe that living my authentic life will allow me to bring my whole self to the rink improve my chances for filling my dreams."

Gary Bettman, the NHL commissioner, issued a statement about the prospect's disclosure, writing, "I share his hope that these announcements can become more common in the hockey community. LGBTQ players, coaches and staff can only perform at their absolute best if they live their lives as their full and true selves. We do not take the meaning and importance of this announcement lightly."

Jock Talk: The evolution of the B.A.R.'s sports coverage
Sign up!