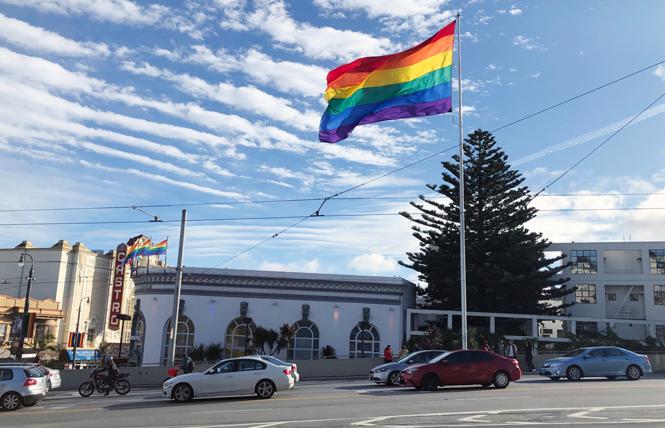 The Castro LGBTQ Cultural District announced it will launch a community survey later this month, to be followed by a town hall, on the subject of raising a more contemporary Pride flag at Castro and Market streets.

This comes weeks after the Castro Merchants Association, which pays for and maintains the 20 by 30 foot flag, proposed installing a second flagpole in the Castro neighborhood to fly a Pride flag design newer than Gilbert Baker's rainbow flag.

"We believe it is absolutely time for us to show our Black, Brown, and trans siblings how much representation matters to us on this board by raising a contemporary Pride flag that prioritizes and highlights diversity and inclusivity, atop Harvey Milk Plaza," the cultural district stated in the July 12 news release. "The future flag we seek to fly proudly at the gateway of Castro's main street does not take away from the legacy of Gilbert Baker and the gay rights movement of our queer predecessors, but honors that legacy by affirming our emerging and intersecting racial and sexual, gender and nonbinary identities, while acutely addressing the current realities we collectively face today."

The release, survey, and town hall come after the cultural district's advisory board voted last month 7-2 that the Baker-designed rainbow Pride flag that currently flies above the plaza should be replaced with the Progress Pride flag.

The Progress Pride flag (which includes a chevron with the colors of the transgender flag, as well as brown and black stripes) was unveiled in June 2018 by nonbinary designer Daniel Quasar.

Last month, many cities in San Mateo and Alameda counties flew the Progress flag in lieu of the rainbow flag as part of annual Pride Month commemorations.

"The Castro LGBTQ Cultural District recognizes the importance of representation and visibility for our LGBTQ+ communities in the neighborhood and across the city," Elizabeth Lanyon, the co-chair of the cultural district's advisory board, stated in the release. "As the LGBTQ movement continues to evolve, we will do our part to be sure every LGBTQ person who comes to the Castro knows they are safe, celebrated, and welcome. We are eager to hear from you, our neighbors, business owners, visitors and friends, about what this means and how we can be part of an inclusive and thriving Castro."

Tina Valentin Aguirre, a genderqueer Latinx person who is the manager of the district, told the B.A.R. that the release, survey, and town hall (tentatively set for August or September) follow up on the vote the advisory board took last month.

Aguirre said that it is hoped the survey, which goes live on the district's social media platforms July 26, and town hall will showcase a desire for change in the neighborhood.

"It's pretty clear we want change; we want a flag that is more representative of us in the Castro," Aguirre said. "I hope people show up with open minds and open hearts to participate in a dialogue as we talk about how the flag and its evolution is important, in the interest of representation."

The merchants group has long maintained the flag that has flown at Castro and Market streets since the flagpole there was dedicated on November 7, 1997 (though over the years there have been occasions when other flags have temporarily been hoisted). The business association ultimately adopted a policy that the Baker flag would fly full-staff, 24/7, year-round.

Castro Merchants President Masood Samereie, a straight ally, stated to the B.A.R. that the group appreciates the district's interest.

"As previously shared, we stand by our recent statement supporting a second flag pole to fly other LGBTQ+ flags and/or symbols at Harvey Milk Plaza or elsewhere in the Castro," Samereie stated. "We appreciate the Castro LGBTQ Cultural District's efforts to further community discussion through a planned survey and town hall."

Former Castro Merchants president Daniel Bergerac, who identifies as a self-described "practicing homosexual," told the B.A.R. that the survey and town hall are "skirting the big issue."

"It's not their flagpole," said Bergerac, who now sits on the board of the Castro/Upper Market Community Benefit District. "It's just telling to me that here's a new, special district that can spend city money and this is where they put time and effort into."

Bergerac noted that almost as many members of the board were absent from the Zoom meeting when the district board decided to endorse the Progress flag (that is, five) as those who'd showed up to vote in favor of the change (seven).

"You have to work together," Bergerac said. "You can't throw people under the bus."

Bergerac called it "backwards" that the survey and town hall are taking place after the board endorsed the Progress flag.

As of press time, Aguirre has not responded to an inquiry as to whether they have been in touch with the merchants on the flagpole issue.

The B.A.R. last August editorialized in favor of "a flag design that expands inclusivity" being flown from the Castro flagpole. Several online petitions at the time collected signatures in favor of replacing the flag as well.

New York-based group seeking to landmark flagpole
Baker's rainbow flag came about when late gay supervisor Harvey Milk had urged Baker, a gay artist, to design a symbol for the 1978 San Francisco Pride parade. With the help of his friends Lynn Segerblom, who now lives in Southern California, and James McNamara, who died of AIDS-related complications in 1999, Baker came up with a rainbow flag design that had eight colored stripes, with one version also sporting a corner section of stars to mimic the design of the American flag.

He died unexpectedly in 2017, and the foundation created in his name recently donated a segment from one of the first rainbow flags that flew in front of San Francisco City Hall during the 1978 Pride parade to the GLBT Historical Society Museum in the city's Castro district, where it is now on public display.

The office of gay District 8 Supervisor Rafael Mandelman has told the B.A.R. it's receptive to the idea of landmarking the flagpole, though no formal request to start the landmarking process has been submitted to city officials.

Charley Beal, the president of the New York-based Gilbert Baker Foundation, has been pushing behind the scenes with both Mandleman and Mayor London Breed's offices for the flagpole to be landmarked, according to communications released as part of a disclosure request to gay activists Michael Petrelis and Bill Wilson. It is not eligible to be landmarked, however, until next year, according to Samereie in a guest opinion for the B.A.R.

"We feel that Supervisor Mandelman would be a perfect candidate for initiating this project at the [Board of Supervisors] level," Beal stated in a March 30 email to Breed's office.

Victor Ruiz-Cornejo, a policy adviser for Breed, responded that it would be best if a landmarking effort was community-led. Beal wrote back that he'd prefer an effort led at the Board of Supervisors.

"Directing our funds toward a community-led landmarking effort will deprive us of other services we need and the opportunity to financially support other institutions like the GLBT museum which currently houses the Gilbert Baker Collection," Beal stated.

When asked for comment, Beal directed the B.A.R. to an online statement from the Gilbert Baker Foundation.

"As Gilbert Baker's sole remaining permanent art installation, the rainbow flag at Harvey Milk Plaza deserves landmark status," the statement reads, in part. "It is a beacon of hope for all people — especially for those who live in oppressive countries. It is also the most significant piece of LGBTQ+ art in San Francisco — perhaps in the world — and a 'time capsule' that marks and commemorates those activists (Black, white, Latino, Asian and Native born) that fought for the rights we have today."

Mandelman, and Breed's office did not respond to requests for comment by press time. Aguirre stated that they are not in touch with Beal about the flagpole.

Updated, 7/27/21: This article has been updated to include the survey link.