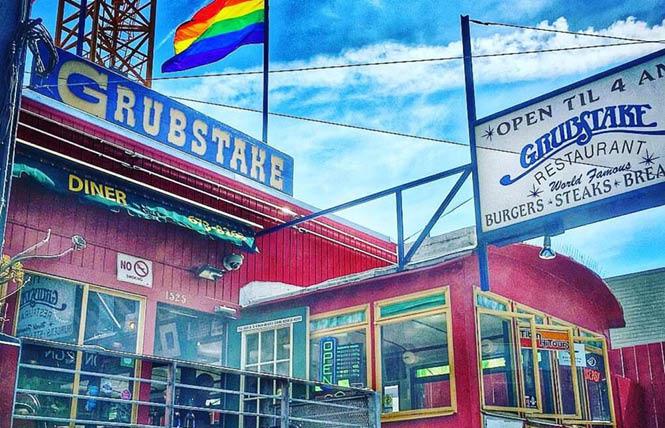 A proposal to build housing and renovate Grubstake Diner is expected to be heard by the San Francisco Planning Commission July 22. Photo: Courtesy Facebook

Almost 70 LGBTQ and allied community members have signed on to a petition to the city planning commission supporting Grubstake Diner in its planned rebuilding project, which will include the construction of 21 apartments above the Polk Gulch late-night eatery popular with the queer community.

The planning commission is expected to hear the matter and can make a decision about the project at its July 22 meeting.

Diner owner Jimmy Consos proposed a plan to rebuild the diner on the bottom floor of a mixed-use building that would also feature affordable housing some years ago, as the San Francisco Chronicle reported in 2016. However, the petitioners state he has faced community opposition from residents in nearby condos.

"The residents of the neighboring Austin condominium building have tried in every way possible to file appeals to various aspects of the project while their sole intent is to block any additional height adjacent to their building," the petition states. "The residents were told when they bought their condos at the much larger Austin just a few years ago that the Grubstake was in the process of being redeveloped and would include additional height to allow for the housing units — to try to undo that work now only serves to postpone the redevelopment of this community asset."

Consos and the Austin condominium building at 1545 Pine Street did not respond to requests for comment by press time. The petitioners state that the eatery is operating in good faith and that Consos is pursuing the project "to make the salvaging of this historic LGBTQ+-friendly venue financially feasible."

"The Grubstake team has worked tirelessly to address any issues brought forth by the Austin residents and we hope that you see the true value of this project in its proposed form," the petition states. "Please move this project forward as soon as possible."

The Grubstake Diner, currently open till 2 a.m., has been operational since the 1960s — around the time Polk Street became one of the city's LGBTQ meccas. Though Polk Gulch's LGBTQ prominence has diminished in comparison to the Castro and South of Market neighborhoods in recent years, the late night diner nonetheless has a strong footprint of support in the community.

One of those supporters is drag queen and activist Juanita MORE!, who signed the petition.

"I've been part of the Grubstake family for at least 30 years and am proud to say my picture is still hanging proudly over one of its booths," MORE! wrote to the Bay Area Reporter. " It has been a haven for the LGBTQ+ community for many years. In some ways, this was the place where the party continued well after the bars had closed.

"Most times, when I would arrive at 3 a.m. on a Saturday, there would be a line down the block to get in — I would sneak around the back and enter through the kitchen," added MORE! "My table was always ready for me."

Cal Callahan, a gay man who is the manager of the Leather and LGBTQ Cultural District, also shared memories of the diner.

"There was the night when my roommate at the time and I were coming home from a club," Callahan wrote. "Our cab driver decided Grubstake — and I assume the two of us looked so good that he went off-duty and joined us."

Callahan stated that supporting the diner is imperative considering the decline in both LGBTQ-specific businesses and late night diners, which for decades have filled an important role in queer nightlife culture.

"Grubstake has always filled a niche to support late-night entertainment in San Francisco," Callahan wrote. "As those options have diminished, each remaining business becomes more and more important."

Indeed, the news release announcing the petition noted the closures of It's Tops on upper Market Street, which shuttered in 2020, and Sparky's Diner on Church Street, which preceded it in death four years earlier. Orphan Andy's continues to operate on 17th Street.

"Leaders of the LGBTQ+ community were consulted five years ago by Mr. Consos to assist him with plans for this project with the goals to keep Grubstake Diner a safe haven and welcoming space for the LGBTQ+ community and nightlife industry; and to preserve the historic ephemera and architectural elements of Grubstake Diner," the release stated. "He incorporated all of our suggestions in his plans and went to great length and expense working with preservationists and architects. The project fully qualifies with CA AB 2345, the California State Density Bonus Law, and the Housing Accountability Act. LGBTQ+ venues continue to be threatened and we've experienced the closure of several of the few remaining late-night restaurants in recent years such as Sparky's Diner and It's Tops."

Peskin's offices did not respond to requests for comment, but Mandelman and Wiener did.

"Since conditional use authorizations are appealable to the Board of Supervisors, I don't take positions on any project requiring a CU so that I can still vote if it comes before the board," Mandelman stated. "That said, the very long list of LGBTQ leaders and organizations who have signed on in support of this project is a strong signal of just how important Grubstake is to the queer community."

Wiener spokesperson Catie Stewart said the senator is declining to comment since "he doesn't usually take positions on individual projects."

Updated, 7/14/21: This article has been updated with comments from Supervisor Rafael Mandelman.

Updated, 7/15/21: This article has been updated with a comment from state Senator Scott Wiener's office.

Bestie Dining :: Your Fave Places to Eat, Drink and Be, Mary
Sign up!