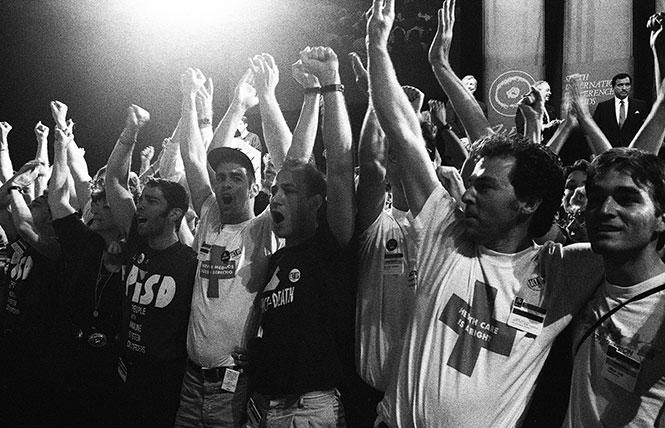 In a taste of the week ahead, AIDS activists welcomed conference delegates during the June 20, 1990 opening ceremony of the Sixth International Conference on AIDS. Then-San Francisco Mayor Art Agnos is onstage, background, at right. Photo: Rick Gerharter

The Sixth International Conference on AIDS, held in San Francisco in 1990, erupted in protest as activists took to the streets and the conference hall demanding a voice. Now, a new exhibition at the city's reopened main library looks back at that historic event.

Photographer Rick Gerharter, a freelancer whose photos have graced the pages of the Bay Area Reporter for decades, was in the streets and inside the convention with members of ACT UP and other activists, documenting their demonstration against discriminatory U.S. immigration policies, lack of attention to women with AIDS, and inadequate funding to support the San Francisco model of community-based care.

"The protests were intersectional before the word was widely used, bringing up issues such as homophobia, racial justice, sex workers' rights, and reproductive rights," a news release from the library states.

The exhibit features a representative selection of Gerharter's photographs from the week of action. Text by veteran HIV journalists Liz Highleyman (also a B.A.R. freelancer) and Tim Kingston sets the stage for the protests, with comments from participants and conference organizers. The show also includes memorabilia such as posters, conference materials, T-shirts, and other items. The release stated that the exhibit was initially scheduled to run concurrent with the 2020 International AIDS Conference in San Francisco and Oakland last July, but was postponed due to the COVID-19 pandemic. (Last year's AIDS conference was held virtually.)

"We are excited to invite the public back to the main library, which is now open on all seven floors, to experience this moving exhibit," Tom Fortin, chief of the main library, stated. "The activism that took place during the early days of the HIV/AIDS epidemic had a lasting impact on our city, and, in many ways, helped shape our successful response to the current pandemic."

Gerharter told the B.A.R. that the exhibit shows the importance of two things. "One, that the AIDS world now is so different than it was 30 years ago, and two, just how influential and powerful the demonstrators were." He added that at the closing ceremony, then-Health and Human Services Secretary Dr. Louis Sullivan was speaking and was shouting down by protesters.

Highleyman said the exhibit is meaningful.

"As we commemorate 40 years since the first medical reports of AIDS, this selection of photos and memorabilia highlights the important role activists played in raising awareness about the epidemic and ensuring people living with HIV get the care and treatment they need," she stated.

The free exhibit, "When the Conference Heard from the Street: Scenes from the Sixth International Conference on AIDS, 1990," is on view on the sixth floor of the main library, in the Skylight Gallery, 100 Larkin Street, through October 9.

Newsom recall set for Sept. 14
California voters will head to the polls September 14 to decide whether Governor Gavin Newsom (D) should be removed from office, and if so, who should replace him. Following an analysis of the costs of the recall and other actions, Lieutenant Governor Eleni Kounalakis (D) set the September date last week. It is earlier than a traditional November election, but some Democrats were in favor of the recall vote taking place as soon as possible. County elections officials had told the state that September 14 would be the earliest they could be prepared.

Newsom, a strong supporter of LGBTQ rights, has been criticized by recall proponents for his aggressive handling of the COVID-19 pandemic. However, as the state reopens, many credit the governor for helping California stem the coronavirus outbreak. The state also leads in vaccination efforts, though health officials remain concerned about the new Delta variant, especially among those who are not fully vaccinated.

Several Republicans have announced they are candidates seeking to replace Newsom. They include Kevin Faulconer, a former mayor of San Diego who said he voted for President Donald Trump in 2020; John Cox, a businessman who lost to Newsom by 18 points in 2018; and Caitlyn Jenner, a transgender woman and reality TV star who is part of the Kardashian-Jenner clan.

Candidates have until July 16 if they want to file to run in the recall election.

New digital exhibit on MCC-SF
A new online exhibit has been unveiled about Metropolitan Community Church-San Francisco. Titled "The Pink and Purple Church in the Castro" because of MCC-SF's longtime former home at 150 Eureka Street in the LGBTQ neighborhood, the exhibit uses archival audio along with text and images to evoke this queer congregation and how it faced AIDS in the years before treatment.

According to an email, the exhibit is a project of the American Religious Sounds Project, housed at Ohio State University.

MCC-SF celebrated its 50th anniversary last year. It is currently located at 1300 Polk Street (at Bush) but is holding all services via Zoom due to the COVID-19 pandemic, according to its website. For more information, visit https://mccsf.org/