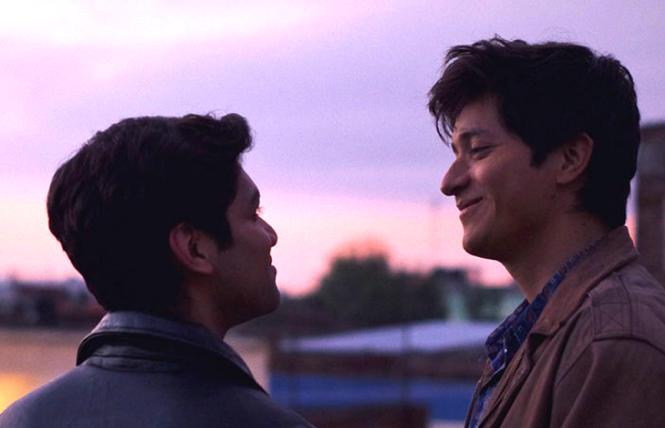 Director Heidi Ewing, director and co-writer, of the new film I Carry You With Me (Te Llevo Conmigo), would undoubtedly agree with Harris trying to put a human face on such a contentious problem, since she attempts to accomplish a similar goal in her new hybrid movie.

Ewing, known for her documentaries (Jesus Camp; Norman Lear: Just Another Version of You), has based her first narrative feature on the real-life experiences of a gay couple's dramatic story of homophobia, love, illegal crossing over to the U.S., and undocumented life in New York City which she encountered while eating at their restaurant. She has created a tender, frustrating, sporadically agonizing, and heartbreaking film that has wisdom to impart on this dire and bitterly divisive subject.

It is Puebla City, Mexico in 1994. Ivan (Armando Espitia) is a gay man, separated from his wife with a young son, barely making ends meet by working long shifts as a busboy/janitor at a restaurant. A graduate of a culinary school, he longs to be a chef, but the owner is reticent to give him a chance. Ivan must remain closeted, for if his wife knew he was gay, he wouldn't be allowed to visit his son.

Frustrated with his life, along with his childhood friend Sandra (Michelle Rodriguez), he seeks refuge in an underground gay bar, where he's immediately attracted to Gerardo (Christian Vazquez), a graduate student/teaching assistant from a well-to-do land-owning family in Chiapas.

Before long they begin a passionate affair. But Ivan's wife discovers the romantic relationship and since he won't be able to see his son, tired of facing bigotry, and desiring to mount a career as a chef, he decides to move to the U.S.

He begs Gerardo to accompany him but he declines, wanting to establish his academic career and fearing "the place that destroys people with loneliness." Instead, Sandra will join him for the harrowing journey across the border.

Ivan naively thinks he will automatically be hired as a chef in a kitchen, send back money for his son, and then return to Mexico a success, but instead he can only find work washing cars and delivering meals for a restaurant. Eventually, Ivan will become a celebrated chef and own his own restaurant. Gerardo misses Ivan terribly and eventually chooses to join him in New York. And his journey is treacherous as well.

Time after time
The film is nonlinear, operating on three timelines, jumping abruptly between them, which can be jarring. Ewing flashbacks to traumatic childhood scenes of Ivan wearing his sister's quinceanera gown and make-up, crushing his father with disappointment when he discovers him.

Gerardo's sadistic father takes the crying child to a cornfield in the middle of the night, threatening that "men like him, get killed," leaving him there to find his way home. The point made is that it's dangerous to be gay in Mexico, especially later when Ivan and Gerardo are attacked by straight hooligans on an empty street.

Ewing then switches gears to documentary mode, with a shaky hand-held camera cinema-verité style, with current-day real-life Ivan in his 50s riding a subway as he narrates his poetic thoughts out loud. This interlude occurs periodically through the film to little effect, disrupting the flow of the more engrossing romance courtship section. 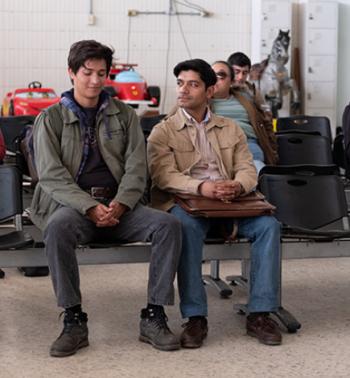 Only in the final segment of the movie —when Ivan reflects on his accomplishments, the severe price he had to pay, leading to a stunning conclusion— will this genre-bending realist approach finally yield dividends. We start to understand what is being carried per the film's title.

Ewing is at her best when contrasting the dangers of being gay with the menacing uncertain threat of deportation, as well as the isolation and painful sacrifices suffered by undocumented aliens, as if exchanging one type of oppression for another. The fear and loathing experienced by emigrants is not so different from the fear and loathing LGBTQ people sometimes undergo here.

Where the film stumbles a bit is that the two decades in-between when Ivan leaves Mexico until today is mostly left blank. It's as if overnight he became an acclaimed chef and owner of award-winning, four- star restaurants. Surely there must have been ordeals to reach such fanfare, but the audience must fill in the gaps themselves.

Also, the movie is primarily centered on Ivan and the more defiant Gerardo's trials fade into the background, despite his story being just as compelling as Ivan's. Espitia and Vazquez are terrific, exuding warmth, intelligence, vulnerability, and sensuality especially in their love affair scenes. One surmises the jerky changes in time, mood, and location (cinematically from pastoral Mexico to gritty New York) mirror the cultural and emotional breaches the characters are forced to navigate.

The film excels in revealing, from an undocumented perspective, the steep cost paid for being uprooted, even if Ivan and Gerardo have realized the stereotypical American dream. Yet Ewing is not-so-subtly asking the audience to redefine what the American dream means in 2021 and if any non-citizen can really achieve it. And how does one measure success today?

But even if their lives are not picture perfect, Ivan and Gerardo are resilient, sustained by their mutual love for each other. The bittersweet I Carry You With Me mostly triumphs because it feels emotionally accurate and captures the poignancy and complexity of an often-anguished no-win situation.

One can only hope Vice President Harris and the legislative branch can devise a plan so other undocumented people won't have to endure the same indignities, perils, and psychic toll that plague Ivan and Gerardo.