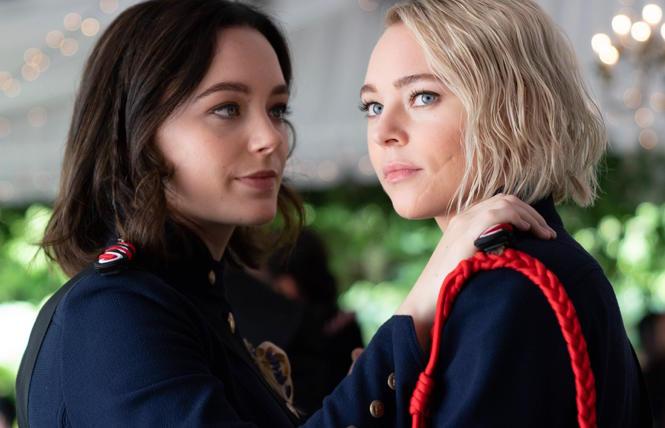 Pride 2021 has drawn to a close with some high-profile comings out splashing across America's TV screens. Carl Nassib is the first active NFL player to come out. He donated $100,000 of his personal cash to The Trevor Project to support LGBTQ kids coming out. In a surprise move the NFL matched those funds.

Olympic sprinter Sha'Carri Richardson came out and thanked her girlfriend after making the Olympic team. Professional wrestler Toni Storm came out as bisexual.

Trans actor Isaiah Stannard, 16, who stars on NBC's Good Girls where he plays Ben Marks, a transitioning teen, came out as trans at 12. But this week he opened up about being trans, speaking about femininity as a trans man and "taking space" in People magazine's Pride series.

Stannard did a Q & A with the magazine and his mother, Kristin. He spoke about attempts to binary block trans people and said he was feeling more relaxed about who he was. He credited some trans TV for helping with that self-expression.

"I feel a lot more comfortable expressing myself in different ways. I used to not wear pink or paint my nails or do certain feminine things that bring me a lot of joy now," Stannard said.

He explained that, "Watching Euphoria and Hunter Schafer's character Jules spoke to me a lot. I just thought it was really beautiful and encouraged me to just kind of continue disregarding the boundaries of gender and expression." (We wrote about Euphoria in June 2019)

Thanks for all the celebs coming out and modeling authenticity for not just our LGBTQ youth, but for folks who have been closeted for years, and just coming out now in their 40s, 50s and beyond. 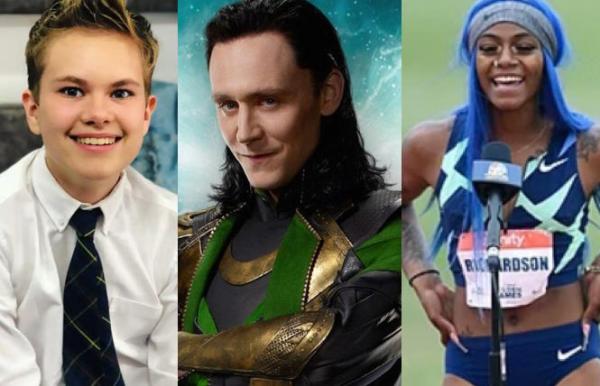 It is never too late to be your true self. A charming film about this is Beginners, for which Christopher Plummer won the Academy Award for Best Supporting Actor for his role as Hal Fields, a man in his 70s just coming out. You can see it on Apple+, You Tube or Amazon Prime.

Oh and Loki's bisexuality was officially confirmed in the Disney+ series, which was also pretty big, considering the audience.

Remember that Pride is a celebration, but living your best life is a gift and the truest form of self care.

Free Britney
Singer Britney Spears hasn't been able to fully live her own life for 13 years, trapped in a court-sanctioned conservatorship. Britney was forced into the conservatorship in 2008, when her mental health struggles and fight with fame were playing out in the tabloids and on late night TV.

We wrote here then about how only CBS's Craig Ferguson stood up for her at that time (see video). He spoke about how he was 15 years sober and what his life choices looked like at 25. Ferguson called out his fellow late night comedians. And noted that what Britney was going through wasn't joke-worthy at all.

Those same comedians and tabloid shows are all suffering from collective amnesia now, commiserating with Britney as she cries out to get her life back.

We all knew Britney was living a restricted life, we just didn't know what unmitigated hell it was. After Britney's explosive testimony at a conservatorship hearing in Los Angeles on June 24, we know now. The same tabloid TV shows that were active participants in her landing in this ongoing trauma are now using her for voyeuristic headlines again.

What a horror of a life Britney has been trapped in, from forced medications to forced contraception to forced six or seven day work weeks. She's 39 years old, but not allowed to get married, have another baby, which she wants to do, or even get new cabinets for her kitchen. Women in Saudi Arabia finally got the right to drive. Not Britney. 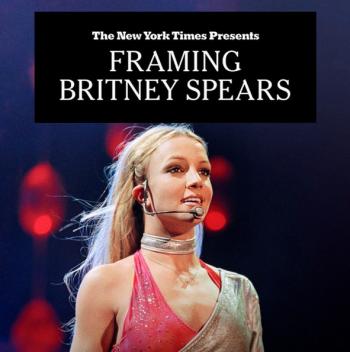 Britney makes a huge amount of money, but she's not allowed to spend it. She can't even reject new dance moves in a show without being put on more medication. She described being forced to work with a fever and being forced onto Lithium after she refused to do a double show. She said the medication made her feel drunk.

Though not millionaire performers like Britney, these personally imperiling and restrictive aspects of conservatorship are what a couple million disabled and mentally ill Americans are also forced to endure, many of them LGBTQ.

Brava to Britney for speaking out in detail about how this happens and how harsh her life as been.

Framing Britney Spears, a documentary by The New York Times that first debuted in February, examines what the public might not know about the star's court battle for control of her estate—and her own life.

You can watch this searing and heartbreaking look at the star and her life on Hulu or YouTube. It's absolutely gutting and one of the most misogynist exposés in recent memory.

Motherland, set in a fictional near-future America, follows the witches of Salem, led by General Sarah Adler (Lyne Renee), who made a pact 300 years ago with the nascent colonial government to save their lives by agreeing to use their powers to benefit the country, in perpetuity.

Their daughters and their daughters' daughters would be the heirs to a paramilitary witch force with supernatural powers. These witch warriors have grown up in "matrifocal" enclaves, devoid of men or men's influence, pedagogy and oppression. The witches' role is to protect the country from terrorists--foreign and domestic.

These are the gender-nonconforming women of our wannabe future. They're smart, cunning, strong and powerful. They are built to heal as well as fight. Their powers are multi-faceted, and so are their desires, which include Raelle's lesbianism.

The witch as metaphor is striking in Motherland: In a society that others women, these women have embraced their otherness and turned it into a dynamic strength.

In an interview last year, Williams said, "I love the female empowerment in this show. We want other women to be empowered from our show, and we want to tell them that they can be anything they set their mind to. You have a voice."

Finally, if you are still hungering for Pride-level feel-good-ness, Love Victor and Feel Good are sweet and funny and rom-com-y and just the kind of thing to help mitigate against that post-pandemic aura of trauma that hasn't quite left us yet. Oh and check out the latest American Horror Story trailer.

For the out and the proud, you really must stay tuned.