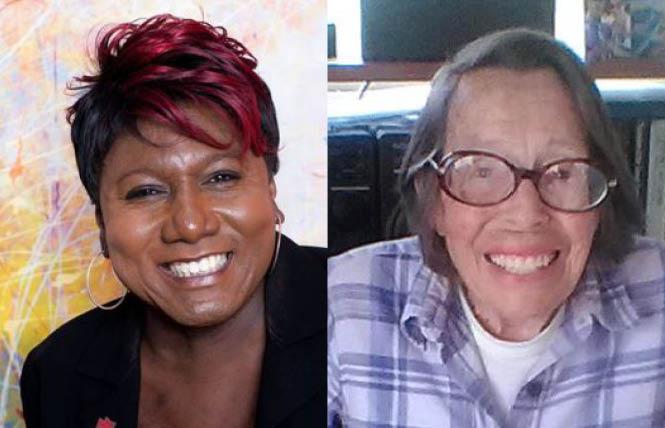 Monica Roberts, left, and Phyllis Lyon are two of the honorees on the Wall of Honor at the Stonewall Inn in New York City. A total of 10 people will be inducted June 24, five for 2020 and five for 2021. Photos: Roberts, courtesy Twitter; Lyon, Joyce Newstadt

Ten names of late queer heroes will be added June 24 to the National LGBTQ Wall of Honor at the Stonewall Inn in New York City, kicking off Pride weekend celebrations.

This year's honorees are lesbian artist and activist Ivy Bottini; lesbian Women's Building founding director Carmen Vázquez; Ruth Ellis, who at the time of her 2000 death was the oldest surviving out lesbian; Jimmy Pisano, who reopened the Stonewall space as an LGBTQ bar in 1990 several year before his death from complications due to AIDS; and Monica Roberts, a trans woman who was the founding editor of TransGriot, a blog focusing on issues facing trans women of color.

Those people will join the five names selected last year that could not be added then due to COVID-19 pandemic restrictions. As the Bay Area Reporter previously reported, the 2020 honorees were Phyllis Lyon, who helped launch the first lesbian organization, Daughters of Bilitis, in 1955 and a trailblazer from San Francisco; Sean Sasser, AIDS activist and educator known for his appearances on MTV's "The Real World: San Francisco" that depicted his relationship with Pedro Zamora, who was named to the wall of honor in 2019; Lorena Borjas, a trans and immigrant rights activist known as the mother of the trans Latinx community in Queens, New York; Aimee Stephens, a Michigan resident whose historic U.S. Supreme Court case paved the way to LGBTQ nondiscrimination protections in employment; and Larry Kramer, playwright, author, and LGBTQ and AIDS activist who founded Gay Men's Health Crisis in New York City.

As the B.A.R. previously reported, the honor wall began in 2019 as a collaboration between the International Imperial Courts of the USA, Canada, and Mexico and the National LGBTQ Task Force. That year, 50 names were added to the wall to commemorate the 50th anniversary of Stonewall riots.

Nicole Murray Ramirez, Queen Mother I of the Americas for the Imperial Court organization, told the B.A.R. that both the 2020 and this year's honorees will be added to the wall during a short ceremony at 8 a.m. Pacific Time June 24.

Deceased individuals are included on the wall, Murray Ramirez explained. He said as a Latino activist he's particularly pleased to see Vázquez, who died earlier this year, honored.

"She was quite a fiery Latina activist leader," he said. "There weren't too many out Latino and Latina activists and so she certainly filled a big void. She was very well respected and it's a tribute to her activism and leadership in the LGBTQ community and also in the Latino community. I'm excited that we have a lot of people of color who also built bridges to their own communities that we [LGBTQ people] are also their brothers and sisters."

Cathy Renna, the communications director of the National LGBTQ Task Force, told the B.A.R. that the addition of Roberts — a Black trans journalist who died at age 58 last October — comes much too soon.

"It's just really tragic that we are adding her," Renna said. "Monica was an icon who required accountability from law enforcement for anti-trans violence. Her blog was the resource whenever we lost a member of the community to violence."

Renna said she last saw Roberts just prior to the COVID-19 pandemic lockdowns.

"I knew her personally and last saw her, actually, at [the] Creating Change [Conference] in Dallas in January 2020," Renna said. "So, not too long before everything shut down."

Kate Kendell, the former longtime executive director of the National Center for Lesbian Rights, said she was pleased to learn Lyon's name will be added. Lyon's wife Del Martin, who died in 2008, was among those added to the inaugural wall in 2019, when Lyon was still alive.

"I suppose you don't get on the honor wall unless you're already deceased, which is too bad since it's something I'm sure Phyllis would have loved to have seen," Kendell said. "What they [Lyon and Martin] did together for queer culture — especially for lesbians — was unmatched for its time."

As the B.A.R. reported last month, the two-story cottage that Lyon and Martin shared for more than five decades at 651 Duncan Street in Noe Valley became the first local LGBTQ historical property protected solely for its ties to lesbian history when it was approved as a San Francisco city landmark. That designation became official June 21 with landmark No. 292.

"It's enormously important for queer people to remember our history and on whose shoulders we stand because the entirety of the predominant culture wants to act like we don't exist or never existed," Kendell said. "So staking out what is true about where we come from is how we preserve that legacy, honor it and create more of our own."

Murray Ramirez had a similar sentiment. He said that while San Francisco does a good job of honoring LGBTQ trailblazers, many other cities lag behind.

Murray Ramirez said he might be inviting controversy to the June 24 gathering — a police officer from the New York City Police Department's LGBTQ affinity group is scheduled to speak.

As the B.A.R. previously reported, uniformed police officers have been banned from several Pride parades around the country due to concerns over present and past police brutality, including in San Francisco and in New York City.

"I got beaten and arrested by police," Murray Ramirez said. "They beat the hell outta me. I know what it is, but I also know the progress we have made. In the 1970s if you'd have told me we'd have trans police officers and LGBT police officers, I'd have said you were on LSD. So I stand my ground on that: we have to acknowledge progress."

Renna said that it was not yet decided whether the in-person event would be livestreamed.