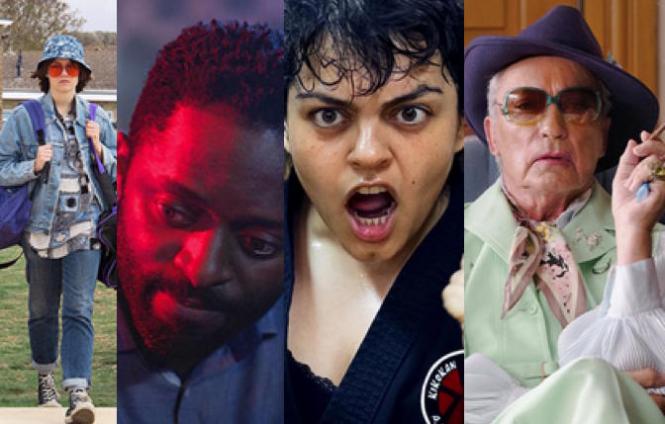 Frameline announced that after the state published their new COVID-19 guidelines on June 15, capacities for the Castro and Roxie Theaters have been boosted up to 50% instead of 30%. Masks are still required. Later this year, Frameline will feature its first-ever Fall Showcase, so we can expect more LGBTQ movies to usher in the holiday season.

One idiosyncrasy of Frameline45 is that the international films are superior to the US/English language movies, especially because of their daring content. In fact the bulk of the latter titles are musicals (In the Heights, Everybody's Talking About Jamie, Summertime) and while well executed, the content isn't exactly cutting edge, though Summertime's use of slam poetry is inventive, even if it starts to wear out its welcome by the film's conclusion.

International queer films have come a long way in the last decade. Previously they tended to be gloomy, where the protagonist committed suicide, was killed, or suffered a dreary closeted life in silence. There seems to be a creative explosion in subject matter. So we have an all-female cast re-envisioning Shakespeare's As You Like It, not afraid to explore gender-bending in Taiwan's whimsical and satirical As We Like It.

Agnieszka Holland brings to life the still controversial Czech closeted gay herbalist and healer Jan Mikolasek whom some see as a precursor to modern-day holistic medicine while others claimed he was a fraud. He was later brought to trial by the Communists in the 1950s, but Holland leaves it up to the viewers to decide if he was genuine or not. Lola is no trans Rebecca of Sunnybrook Farm and can be as unpleasant and stubborn as her bigoted father, not afraid to shoplift to get what she needs. 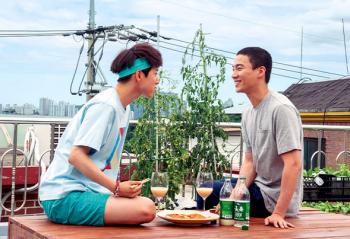 'Made on the Rooftop'

Ha-neul in Made on the Rooftop is an over-emotional, self-centered malingerer, downright nasty to his boyfriend who is supporting him. Nico is willing to use karote violence to prevent another vicious attack by xenophobic hooligans. David in Francois Ozon's Summer of 85 has no boundaries in satisfying his own pleasures and getting what he wants, no matter whom he hurts. And Adrian must defy his family, church, employer, and hometown just to be true to himself, not always noble in his dealings with those he loves in Walking with Shadows.

Milkwater, the title derived from an Anne Sexton poem, concerns Milo (Molly Bernard), a lonely unattached straight woman with a lesbian roommate and gay best friend (the fabulous Robin de Jesus, Boys in the Band), meets an older gay man Roger (Patrick Breen) in a bar. On a whim she decides to act as a surrogate so Roger can become the dad he has always wanted to be. 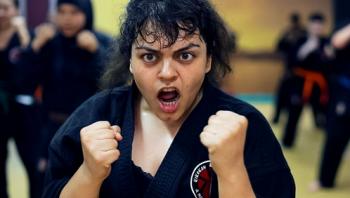 Bernard marvelously balances sassy pluck and neediness, but her character isn't likable, an almost borderline personality who alienates everyone around her. Roger makes clear from the get-go that this is a business partnership and he wants to raise the baby alone, despite Milo wanting Roger more as a friend and potential co-parent. Funny in spots especially with witty dialogue (though few in real-life talk this cleverly) it's predictable as Milo struggles to maturity. Periodically insightful on the complex messiness of modern families, Milkwater doesn't quite hit the mark.

Nico is a film I'm glad was made because it shows the corrosive effects of xenophobia, a condition the U.S. suffers from vis-à-vis undocumented aliens. However, it's a German movie involving a Berlin lesbian of German-Persian ancestry working as a home health caregiver for elderly patients. 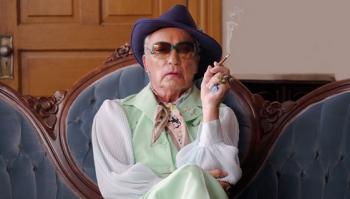 The carefree compassionate Nico is savagely attacked by four German thugs, lands in a hospital, begins a long journey of recovery, leading to emotional problems, especially with her best friend Rosa. Realizing she isn't as accepted as she once thought and feeling unsafe, she opts for self-empowerment through a karate course and draws strength from a budding relationship with a mysterious carnival worker, a Macedonian refugee illegally living in Germany.

Sara Fazilat is amazing as Nico, as she circumnavigates a wide spectrum of emotions. Nico's solution to violence is bound to engender vigorous post-movie discussion. At 73 minutes, this engrossing film takes on an issue of increasing importance as record numbers of refugees attempt to find homes in foreign countries.

Lola is the best trans film at the festival, a Belgian-French movie about a volatile 18-year-old transgender girl ready to undergo sex reassignment surgery, yet interrupted by the sudden death of her mother. Her mother wanted her ashes scattered along the Belgian coast, so Lola must reunite with the father who disowned her years ago, throwing her out into the streets.

Reluctantly, they travel together, so Lola becomes a road movie in which predictably both characters are transformed by their journey. Trans newcomer Mya Bollaers scores a home run in her debut, quite capable of keeping up with veteran actor Benoit Magimel, splendid as her father. A meditation on grief and loss, Lola offers insights on how to incorporate a painful past on the way to learning how to live authentically.

Swan Song is another must see, mainly for the tour de force performance of Udo Kier who finally has a lead role worthy of his talent. Kier plays retired hairdresser/make-up artist Pat Pitsenberger. Wasting away in a nursing home, he's offered $25,000 to fix up the corpse of a rich estranged friend Rita (Linda Evans), who posthumously tries to make amends for past transgressions. At first refusing, Pat reconsiders by escaping and hitchhiking to his old hometown of Sandusky, Ohio where he once ran a beauty salon that catered to a rich clientele. 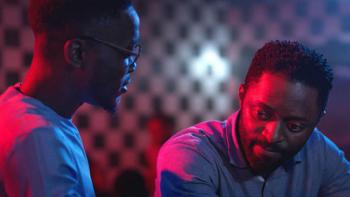 However, in his return he must face old demons such as: his dead partner, a former hairdressing assistant (played by a sassy conniving Jennifer Coolidge) who stole Pat's top clients to start her own salon, the drag bar now closing where he once headlined in his heyday, Rita's gay grandson (Michael Urie), and the self-realization of how Pat contributed to his own decline.

The openly gay 76-year-old Kier, was once the teenage lover of German director Rainier Werner Fassbinder, appeared in low budget horror movies like Andy Warhol's Dracula, and acted in all Lars von Trier's films since 1987. His Pat is the type of role an actor waits an entire career to embrace. He pours a lifetime of experience into this golden opportunity offered to him by director Todd Stephens (the classic Edge of Seventeen).

Quite simply, Kier's Pat is one of the greatest queer performances ever, alternating between hilarious and heartbreaking, especially in the final scenes, where Kleenex is mandatory. This is why we adore film festivals, to discover gems like Swan Song.

Another unexpected jewel is the queer Nigerian drama Walking With Shadows, based on the Jude Dibia novel. Adrian (Ozzy Agu) and Ada (Zainab Balogun) seem to have the perfect marriage in conservative Lagos, until an anonymous phone call to Ada alleges that Adrian is gay, forcing him to admit he is attracted to men. Ada questions everything about her life and throws Adrian out of their home. 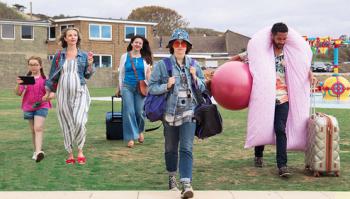 Gossip begins to unravel Adrian's job, church life, resurrect dysfunctional family dynamics, such that he becomes a virtual outcast. This is a very familiar story and the movie seems to be heading to a disastrous conclusion, but surprises you and goes in a different direction.

This is Irish director Aoife O'Kelly's feature debut. She provides a fascinating window on the harsh realities of dangerous contemporary queer Nigeria, which we've rarely ever seen depicted. Agu and Balogun are both marvelous, as we view their lives from their differing sensitive portrayals. Walking is appointment film at its finest.

Introverted, droll 17-year-old AJ (Nell Barlow) is dragged to a summer seaside family holiday against her will by her mother (the wonderful Jo Hartley). Prepared to have a horrible vacation, instead AJ meets Isla (Ella-Rae Smith), a lifeguard, and a romance begins to blossom, allowing AJ to explore her sexual and perhaps gender identity in Sweetheart, an English film.

We've seen this story many times and this is no Edge of Seventeen, Call Me By Your Name, or even Booksmart. AJ is an awkward free spirit trying to re-invent herself, resulting in a buoyant spirit which seems to match the carefree location, aided by a perfect teen pop soundtrack. 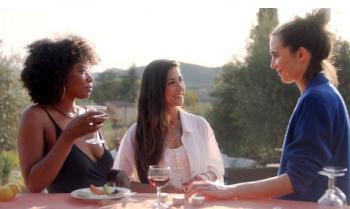 Refreshingly, the mother —who starts out almost villainous— becomes more likeable; we discover more about her history as the film progresses. The movie with its effervescent snarky charms is perfectly timed for summer and is enjoyable as long as you don't expect too much from it.

Ma Belle, My Beauty is one of these films whose premise delivers more than its execution. Polyamory is becoming a more popular theme in movies and here there is a stress on the lesbian side of the triangle. Bertie (Idella Johnson) from New Orleans has recently married long-time beau Fred (Lucien Guignard) and they have moved to the Cevennes region in the south of France.

Fred is a jazz musician with a band and Bertie is their singer. She's in a funk, feeling isolated in foreign surroundings and isn't sure she wants to continue performing. Concerned, Fred secretly arranges a visit from Lane (Hannah Pepper-Cunningham), a former girlfriend with whom Bertie had a relationship the same time as the one with Fred.

Fred hopes the two women will reconnect which might inspire Bertie's creativity in other areas, namely to return singing in his band. Of course complications ensue, especially when Lane meets an Israeli ex-soldier Noa (Sivan Noa Shimon) at a party and they sleep together.

This movie rarely works because the audience isn't privy to what the characters are thinking or their inner conflicts. It's too understated. Also, I'm not sure Pepper-Cunningham is right for her role, as there is no magnetism between her and Johnson, even in their inevitable big bedroom scene which seems rote. Still, Johnson is a delight and a lovely heartfelt singer (her song in the party scene is the film's peak). There's the stunning sunny country cinematography and the jazzy rhythmic music, but in what could've been captivating or daring, instead just disappointingly fizzles to a nebulous conclusion.

Korea gets a melodramatic makeover in the cool comedy Made on the Rooftop, which will appeal to millennials. Ha-neul, a jobless slacker in Seoul, breaks up with his three-year closeted boyfriend Jeong-min leaving behind his beloved cat Ari. The jaded Ha-neul moves into the apartment of his best friend BongBong, a rising online celebrity who has a flippant opinion on every topic. He's pursued by a fan who wants to have a relationship but BongBong doesn't seem interested.

Jeong-min is seriously injured in a car accident for which Ha-neul feels guilty. Both he and BongBong have to face major life challenges, mainly through eating and dancing on the rooftop of the building in which they live. Made could easily have been a musical. This is one of those films that shouldn't work, yet succeeds because of its hipster energy and its ability to laugh at itself despite dealing with serious issues. Similar to Sweetheart in that Made is also ideal summer fare, you get to fall in love with Ari, as much a star as the two male lead actors.

Frameline45 : homos, where the heart is