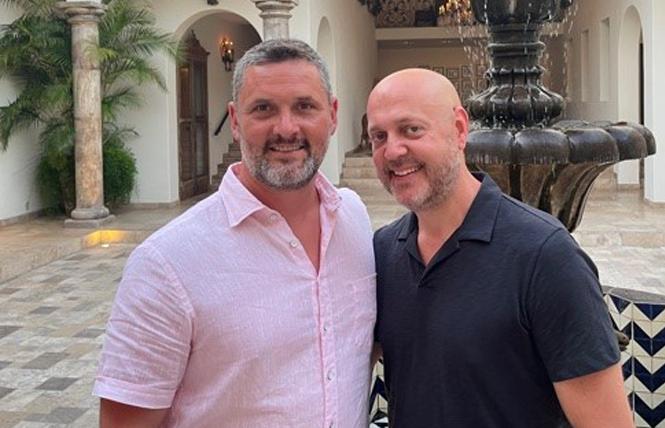 I came out to my family when I was 26 years old. Even though I was certain they'd be loving and supportive once they wrapped their heads around the news, for some reason, the idea of saying "I'm gay" was terrifying. It was something about the word itself: what it meant and how it made people feel. It scared me, and I knew things would change once I said it out loud.

I pushed through it, and after some tears and laughs, it was done.

Once I got those first few conversations under my belt, I began telling pretty much everyone I knew. Across the board, I was met with love and kindness and curiosity. Lots of funny and interesting questions in particular from my college buddies. A personal favorite from my buddy Mike: "Wait, be honest — am I hot or not really?"

I realize how lucky I was, and that my experiences don't reflect everyone's throughout the LGBTQ+ community. So when I think about that, I'm very aware of the opportunity I have to support friends and colleagues who have had it harder and might still be struggling to come to terms with being out at work.

For this reason, I'm thankful to be at Wells Fargo for over a decade. I work for a company where I am celebrated and supported, not only by how I'm treated individually, but also by the intentional actions the company takes to ensure we are equal citizens outside of work, such as supporting the Equality Act. (The federal legislation would add sexual orientation and gender identity to the 1964 Civil Rights Act. It passed the House of Representatives in February but remains stalled in the U.S. Senate.)

That assurance, along with living in a city where I can confidently walk down the street holding the hand of my husband, Bruce Walter, makes me aware of both the privilege I have and the responsibility to support those who aren't in similar situations.

Being out at work is one of the ways I harness the power of my privilege and responsibility and show support for others. Because I'm in a relatively senior role, when I talk about my life openly and honestly, I know it could help those just starting out in their careers or those with friends, family, or loved ones who are grappling with their own identities. The message I hope to convey is that everyone should be exactly who they are — less concerned about any possible adverse impact and more empowered and confident that being themselves is what can actually help with personal engagement and career advancement.

I feel fortunate to be out at work, and I hope we continue to see greater numbers of senior leaders doing the same. Representation matters, and seeing ourselves reflected in greater numbers by those in senior ranks will have an enormous and lasting impact.

Especially when you're younger, seeing people similar to you thriving, no matter what your diversity dimensions, helps build confidence and envision future possibilities. For me, having an out boss when I was 23 and in my first job after waiting tables made me think, "Someday, that could be me."

That's an experience I've never forgotten, and it helped fuel my desire to be out at work and open and proud about my life. Colleagues often talk about their spouses and kids, so I tell them about my husband: a powerful word I use intentionally. They share how they met, and I do the same (at a straight bar!).

Now that I'm in my 40s, living my authentic life is less scary than it was in my 20s. And though much has changed in the 20 years since I came out, I know we're still not fully there in terms of acceptance. So if my being out at work helps anyone, I am doing my job. I know not everyone feels comfortable or safe doing so, and no judgment toward those who choose not to for whatever reason, but I personally see this as a responsibility and a privilege and I am fortunate to have the love and support from friends, family, and colleagues.

Recently, a colleague from Iowa said working for me was the first time she reported to a manager who was out at work. She has a wife and two beautiful children, and said it made her feel safe, welcomed, and celebrated for being her whole self. The fact that this telegraphed to her that it was OK to share her story with colleagues is exactly why I choose to be out at work. It was one of the biggest compliments of my career, and makes me want to do more to be an example for others.

Pride reminds me of my own experiences, but also provides an opportunity to reflect on the reality of others. Having straight allies has been a critical piece of my own journey, and I am committed to doing the work to be that same ally to my transgender and nonbinary friends and colleagues, as well as those from historically marginalized communities. The opportunity to be an active and vocal supporter is right there in front of us, and needed more than ever.

Wishing you all a happy and safe Pride Month. Whether you identify as LGBTQ+ or are one of our allies, I hope we all can be proud, be kind, and look for ways to be an advocate for anyone who could use your support. We really are stronger together.

Matt Hurwitz is executive vice president and head of Commercial Banking Communications at Wells Fargo, where he has worked since 2011. Based in San Francisco, he holds a bachelor's degree from Boston University and a master's in management communication from Emerson College. He and his husband, Bruce Walter, have been married for nine years, and recently adopted Stanley, an Australian Cattle Dog/Pit Bull rescue from Sonoma. You can email him at matthew.s.hurwitz@wellsfargo.com

Guest Opinion: Stop signing up for ageism
Sign up!