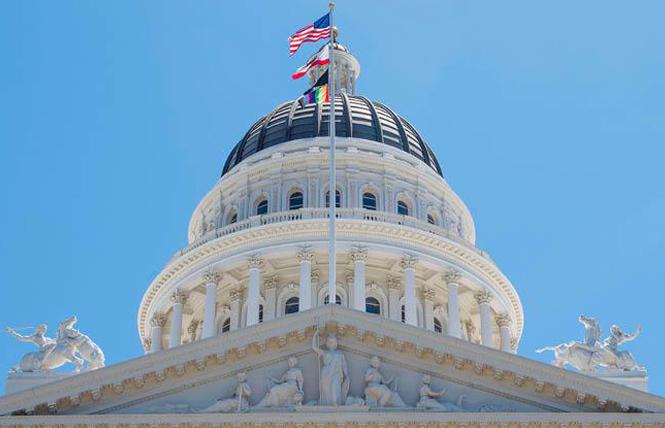 California lawmakers included roughly $52.3 million toward various LGBTQ initiatives in their budget proposal for the fiscal year that begins July 1. Among the items are a historic $15 million investment in transgender health services, $13 million to support LGBTQ youth, and a $19 million boost to fight the spread of HIV, hepatitis C and sexually transmitted diseases.

Legislative leaders also allocated $750,000 to support LGBTQ archives across the state and $1.7 million for a new air circulation and filtration system at the National LGBTQ Center for the Arts in San Francisco as it prepares to reopen to the public as the COVID epidemic ebbs.

The legislators also allocated $365,600 in one-time funding to develop and implement policies related to the Transgender Respect, Agency, and Dignity Act. In addition to giving incarcerated trans and nonbinary individuals a choice in where they are housed, the act requires state prison personnel to record the person's self-reported gender identity, gender pronouns, and honorifics during the intake process.

The Legislature has until June 15 to pass the roughly $267 billion budget and send it to Governor Gavin Newsom to sign. Despite the ongoing health crisis the state's finances have not been negatively impacted, instead state budget analysts have projected a $76 billion budget surplus.

Thus, state lawmakers have proposed finally funding the Transgender Wellness and Equity Fund. It was established in 2020 only after Assemblyman Miguel Santiago (D-Los Angeles), a straight ally who authored the legislation, and trans advocates agreed to strike from the bill the requirement for the state to actually fund it.

In April a coalition of trans groups had sought $15 million over two years, starting in 2022, for the fund, but Newsom didn't allocate any money toward it when he released his revised budget in May. Legislators, however, allocated all $15 million for the fund to be distributed by the state's Office of Health Equity toward programs focused on coordinating trans-inclusive health care for individuals who identify as transgender, gender-nonconforming, or intersex.

Newsom did include $3 million for the state Department of Education to develop LGBTQ+ teacher training, two years after he signed a teacher training bill into law. At the time he had requested that it too be stripped of a mandatory funding provision with the pledge to fund it later.

Under the state lawmakers' budget proposal, $1.8 million of the money would be earmarked for the development of an online LGBTQ+ cultural competency training. An additional $600,000 would go for developing an interactive online platform for the content, while $598,000 would be used for one-time costs incurred by the state.

Boost for HIV, STDs, hep C services
Last year, due to the pandemic's anticipated impact on the budget, a coalition of health services agencies pared back their $52 million request to $3 million to fund a plan to end the overlapping epidemics of HIV, hepatitis C, and sexually transmitted diseases. This year they were seeking at least $19 million, but Newsom did not include any of their funding request in his budget proposal.

Legislators, however, included in their budget proposal the $19 million investment in the End the Epidemics plan. It includes an additional $13 million ongoing investment in state funding for the effort and includes a one-time $6 million increase.

Another allocation of $2.8 million would allow Narcotic Treatment Programs to, among other tests, provide testing for HIV and hepatitis C. The legislative budget proposal also includes using the ADAP rebate fund to help cover the cost of PrEP navigation and retention services to help HIV-negative people with low-to-moderate incomes continue taking the medication that helps prevent the transmission of HIV. There is no dollar amount specified in the budget, though it is expected to be in the millions of dollars.

"We know these epidemics continue," said Craig Pulsipher, the associate director of government affairs for APLA Health in Los Angeles. "They were growing before the pandemic, and we have plenty of signs they have only grown worse over the last year."

The End the Epidemics funding was a priority for the Legislative LGBTQ Caucus, the affinity group for out members of the state Legislature. Gay Assemblyman Evan Low (D-Campbell), chair of the caucus, expressed hope the investments would stem the tide of the trio of epidemics in a statement to the Bay Area Reporter.

"The pandemic has shown both sides of the coin when it comes to our health care system. We have seen massive disparities in access to treatment and services, which were exacerbated by mistrust, poverty, and housing instability," stated Low. "But we've also seen the country's incredible ability to mobilize and expand services in a way that has allowed us to turn the corner on the pandemic. I'm confident that if we apply the same tenets and address funding gaps in California's health care system, we have the ability to fully tackle local epidemics related to HIV, hepatitis C, and sexually transmitted diseases."

UPDATED 6/9/2021 to clarify state lawmakers proposed a $19 million boost in new funds for the End the Epidemics plan, with $6 million being a one-time allocation and the rest of the money ongoing.