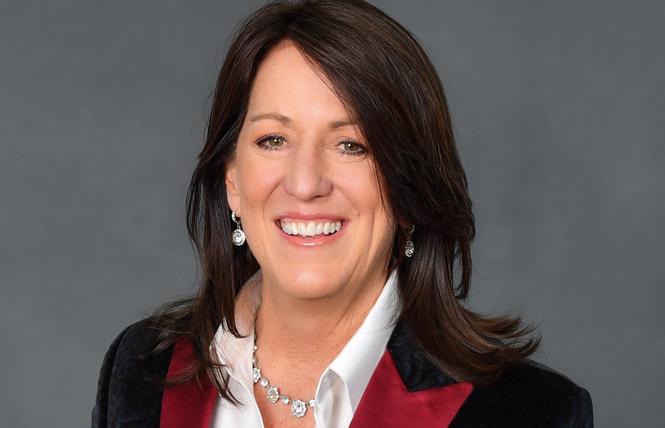 Kate Kendell is now the chief of staff at the California Endowment. Photo: Courtesy Facebook

Kate Kendell, the former longtime executive director of the San Francisco-based National Center for Lesbian Rights, is now the first chief of staff for the California Endowment.

Kendell began the new position June 1, after having served for nine years on the endowment's board of directors, a news release stated.

"The endowment is excited to have Kate Kendell continue to serve our foundation, now as chief of staff," stated Dr. Robert K. Ross, CEO and president of the endowment. "Kate's career is steeped in racial justice, LGBTQ advocacy, and civil rights. She will be a strong leader for our work in the next decade."

According to the release, Kendell's hiring comes after recent retirements of executive team members and a major transition of staff. Kendell will assist and support the executive team, and will play a key role in the development and implementation for the endowment's future work, helping to deepen the racial equity efforts of the organization. She will also support grant making from the CEO's office, and ensure the prioritization of critical issues and required information for the CEO to help facilitate efficiency and provide timely decision-making.

Kendell stepped down from NCLR at the end of 2018. Most recently, she served as interim chief legal officer at the Southern Poverty Law Center.

"After serving on the board of the California Endowment, I am especially excited to join the staff of an organization committed to health and social and racial justice," she stated in an email. "For 25 years the endowment has empowered and partnered with youth and residents to create vibrant communities where all can thrive, including LGBTQ residents. I look forward to helping the passionate and talented team at the endowment deepen and grow that work for all Californians."

The California Endowment has a budget of about $3.5 million, according to the audited financials on its website. It works to provide grants to develop social justice and health equity for all Californians. Learn more at https://www.calendow.org/

"Glide Memorial Church has a long history of LGBTQ+ inclusion," White stated in a news release. "Our congregation has been a spiritual home for the LGBTQ+ community from the beginning. ... We celebrate Pride because we know that the LGBTQ+ stories that make up our beloved community will endure."

There are drag and spirituality shows on Friday, June 11, featuring Afrika America; Monday, June 14, with Lotus Boy; and Monday, June 21, with Honey Mahogany. All start at 7 p.m.

For more information and to register for the events, go to https://www.glide.org/

This is also the first public program offered by the alliance, a 501(c)6 nonprofit with more than 1,200 members that launched last October. According to a news release, it will feature a variety of important topics for potential homeowners, including discussions about down payments, mortgage types, pre-approval, and the lending process. The program will offer insight into selecting an agent, home, and neighborhood while offering perspectives on the offer, negotiations, and the different steps to closing. The alliance will also provide resources to help combat potential housing discrimination against sexual orientation and gender identity.

"Today's market conditions have heightened the challenges facing first-time homebuyers and we believe it is important to provide members of our community with the tools and resources they need to navigate the buying process," stated Ryan Weyandt, CEO of the alliance. "Along with discrimination, and fear of it, we have found a lack of education focused on the LGBTQ+ community that would allow more to better prepare for the process."

Weyandt pointed out that the LGBTQ+ homeownership rate is just 49.6%, according to the Williams Institute, an LGBTQ think tank at UCLA School of Law. This is far below the national mark of 65.6% cited by the U.S. Census Bureau.

One of the featured speakers will be Josh Pringle from Better Homes and Gardens Real Estate Leaskou Partners in Palm Springs. Other speakers include Kassandra Alicea, the alliance's San Antonio, Texas chapter president and an agent with Coldwell Banker's D'Ann Harper Realtors, and Ron Waterson, a loan officer with PrimeLending in Dallas.

There is no cost to attend. To register, go to https://realestatealliance.org/event/first-time-home-buyers-course/

CA Hispanic chamber launches LGBTQ business initiatives
The California Hispanic Chambers of Commerce has announced its LGBTQ+ Business Initiative launch. The initiative will promote an inclusive ecosystem at the CHCC through regional collaboration, maximizing resources, and leadership development, according to a news release.

The CHCC has committed to building bridges between its regional Hispanic chambers, affiliates, and the regional LGBTQ+ chambers or business associations in launching the initiative.

"LGBTQ+ rights this decade has seen a range of positive changes. Companies have come a long way putting in place policies that promote and protect diversity," stated Julian Canete, president and CEO of CHCC. "But there's still more that can be done, in particular a formal collaboration between the CHCC and the LGBTQ+ business community."

The CHCC will work on cultivating certified LGBTQ+ diverse suppliers, connecting them to opportunities. It will also assist its corporate partners in diversifying their supply chains, and advocate on behalf of LGBTQ+ and allied business communities.