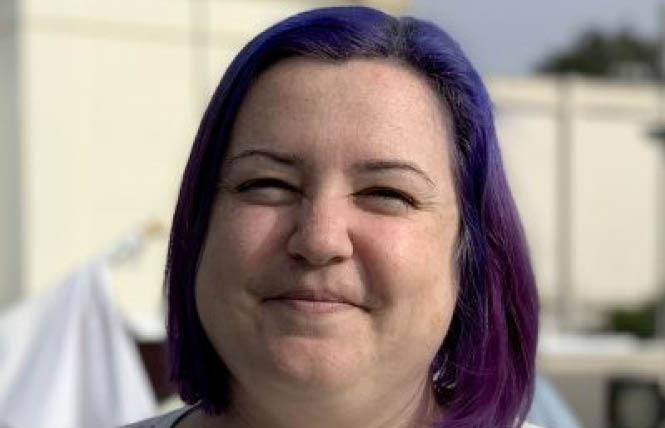 Janessa Broussard, RN, of the San Francisco AIDS Foundation, said that there are still racial and ethnic disparities in PrEP access and use. Photo: Courtesy SFAF

New data from the federal Centers for Disease Control and Prevention show that new HIV infections fell by 8% between 2015 and 2019, largely thanks to a decline among young gay and bisexual men. Increased PrEP use and prompt HIV treatment have contributed to the progress, but disparities remain, and the latest figures do not reflect the impact of the COVID-19 pandemic.

"We still need to continue to move toward centering those who are most at risk and impacted by HIV," Janessa Broussard, RN, MSN, vice president of medical affairs at the San Francisco AIDS Foundation, told the Bay Area Reporter. "Despite the efforts to increase awareness and uptake, there still remain stark racial and ethnic disparities in PrEP access and use. Getting to zero HIV infections will require sustained support of community-led PrEP programs, as well as investment in programs that improve the social welfare of these communities."

In contrast, transgender men and women and Native Americans saw an increase in new diagnoses. Numbers remained stable for Latinos and for people ages 25 to 35 and those over 55. While diagnoses were stable overall among people who inject drugs, white injection drug users saw a notable increase, which the CDC attributes to concentrated HIV outbreaks associated with the opioid crisis.

However, not everyone who contracts HIV is diagnosed promptly. Some people diagnosed in 2019 acquired the virus earlier, and some who contracted HIV that year have not yet been diagnosed.

The CDC estimates that the actual number of new infections nationally in 2019 was 34,800, an 8% decline. At the end of the year, an estimated 1.2 million people age 13 or older were living with HIV, including about 13% who were not aware of their status.

The drop was largely driven by a decrease among young gay and bi men, who account for a majority of new cases. Between 2015 and 2019, the number of new infections among men who have sex with men fell by 9% overall, but there was a 33% decrease among those ages 13 to 24.

Although declines in HIV incidence were seen across racial and ethnic groups, Black and Latino people continue to be disproportionately affected. African Americans are eight times more likely, and Latinos are four times more likely, to acquire HIV compared with white people. And people in the South account for more than half of all new infections.

Locally, as the B.A.R. previously reported, San Francisco saw a 19% decrease in new HIV diagnoses in 2019 compared with 2018, reaching a record low of 166 new cases, according to the latest Department of Public Health HIV epidemiology report, released last September. Here too, diagnoses declined across population groups, including among Black and Latino men, who had seen small increases in recent years. But still, African American men and women continue to have a higher diagnosis rate than other groups. ()

Prevention appears to be working
The progress reflected in the latest surveillance reports is likely due to increased PrEP use and rapid initiation of antiretroviral therapy by those who are newly diagnosed. People on effective treatment who maintain an undetectable viral load do not transmit HIV to their sexual partners.

A new CDC monitoring report shows that nearly 285,000 people had a prescription for PrEP in 2019. This represents 23% of eligible individuals, about 3% more than the 2015 proportion. Just over 80% of people diagnosed with HIV were linked to care within one month, and 66% had an undetectable viral load in 2019, also an improvement over 2015.

But again, the disparities were stark, largely because Black and Latino people face greater barriers to accessing prevention and care services. Nearly two-thirds (63%) of eligible white people were receiving PrEP in 2019, compared with just 8% of Black people and 14% of Latinos. And while 71% of white people with diagnosed HIV had an undetectable viral load in 2019, the rates fell to 61% for Black people and 65% for Latinos.

Although the new data are encouraging, the CDC stressed that addressing these disparities will be crucial in order to reach the federal government's goal of reducing new infections by 90% by 2030, as set forth in the Ending the HIV Epidemic in the U.S. plan. The agency estimates that doing so will require 50% of eligible people to be on PrEP and 95% of diagnosed people to be rapidly linked to care and achieve viral suppression.

In San Francisco, 95% of newly diagnosed people were linked to care within a month in 2018, and 81% of those diagnosed the previous year achieved an undetectable viral load within a year. But viral suppression rates were lower for women (71%), Black people (70%) and injection drug users (66%), and fell to a dismal 39% for homeless people.

Effect of COVID unknown
Of note, the new reports do not yet reflect the impact of COVID-19, which has curtailed HIV testing, prevention, and care services locally and nationwide.

According to Dr. Hyman Scott, clinical research medical director at the Department of Public Health's Bridge HIV, HIV testing and viral load monitoring both fell by more than 50% in April 2020 after the city imposed its stay-at-home order. In December, Scott told the B.A.R. that although HIV testing had since increased, it had not returned to pre-pandemic level. However, he noted, the proportion of people testing positive appeared to be holding steady.

"Unfortunately, we anticipate that the COVID-19 pandemic will likely disrupt some progress made in HIV prevention," SFAF's Broussard cautioned. "In San Francisco, we know that regular HIV testing, PrEP uptake, and PrEP persistence have slowed during shelter-in-place, so we're concerned that we'll see an uptick in HIV infections as a result. It has been reassuring to see an increase in demand for PrEP-related clinic appointments over the last few weeks."

A possible silver lining to the pandemic is that it has accelerated the development and rollout of innovative strategies for continuing services, such as telehealth and self-testing, which could help reach the populations hardest hit by HIV.