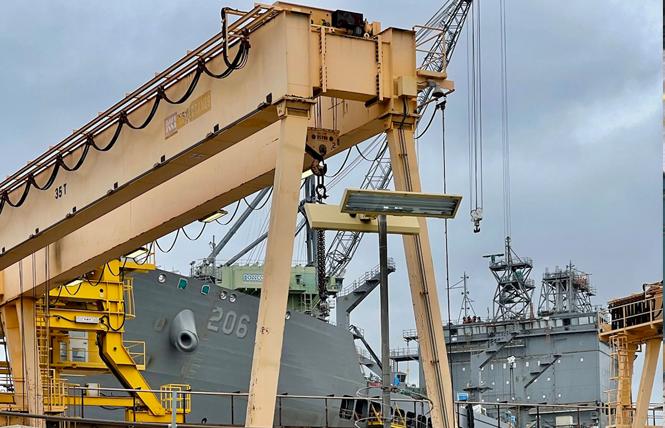 LGBTQ leaders are getting a sneak peek this week of the naval ship named after the late gay San Francisco supervisor Harvey Milk. Work on the USNS Harvey Milk, the first Navy vessel to be named after a member of the LGBTQ community, is set to wrap up later this year on schedule.

An LGBTQ San Diego advisory group had launched a campaign in 2012 to have a naval ship named for Milk, a Navy veteran who was on active duty during the Korean War. A naming ceremony for the vessel was held on Treasure Island in San Francisco in August 2016 with Ray Mabus, at the time secretary of the Navy, and Congresswoman Nancy Pelosi (D-San Francisco), then the House minority leader.

A first cut ceremony for the ship took place December 13, 2019 at the General Dynamics National Steel and Shipbuilding Company's San Diego shipyard. It marked the start of construction, with the cutting of the first piece of steel being used. 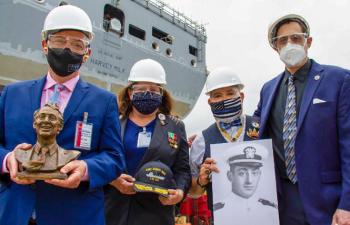 "I started crying. It is gorgeous," said Murray Ramirez, who as the Queen Mother I of the Americas and Nicole the Great is the titular head of the Imperial Court System, the philanthropic drag organization that began in San Francisco in 1965.

Dufty told the Bay Area Reporter that he was surprised by how "massive" the ship is. It is one of four that will posthumously honor civil rights leaders, with the first congressman John Lewis and the others for U.S. attorney general Robert Kennedy and U.S. Supreme Court chief justice and California governor Earl Warren.

"It looks like a skyscraper has been turned on its side and it floats," said Dufty, who served in the Castro-centered supervisor seat that Milk had represented the Castro at City Hall and currently resides in the neighborhood. "It is just of that scale. You marvel at it."

Friday at 10 a.m. a host of LGBTQ leaders and San Diego local officials are set to receive a VIP tour of the under-construction ship. It comes a day prior to Harvey Milk Day, a day of special significance in California observed on May 22, Milk's birthday.

"For me, it is truly an honor to be asked to be a part of it," said Carrillo, crowned as the 28th Emperor after Norton of the imperial local court in 2000.

Having attended the first cut ceremony, Carrillo told the B.A.R. he is excited to now get to tour the nearly completed ship and can't wait to see it make its maiden voyage.

"I just think the awareness of Harvey and all his efforts for the LGBT community is now going to be broadened just for this ship pulling into port. Everybody is going to know who he is now who didn't know before," said Carrillo.

NASSCO officials have told Murray Ramirez that the USNS Harvey Milk will be ready to launch this November. He is working with Gloria's mayoral administration, the Harvey Milk Foundation and the Imperial Court system to plan several "big celebrations and events for the first Navy ship in the world being named after a gay man and a soldier who was forced to resign because he was gay," Murray Ramirez told the B.A.R.